China is traditionally the leading source of spam in the world, and letters from numerous Chinese manufacturers, producing a huge variety of goods, are constantly present in spam traffic. In our October report we mentioned that these mailings are usually linked in some way to the most popular international holidays. And seeing as how January doesn’t really have any major holidays to speak of, the spammers have turned to another major event – the forthcoming Winter Olympics in Sochi. For instance, some warehouse companies have been promoting their services by telling recipients that their services are being used by Russia in preparation for the Sochi 2014 Games. 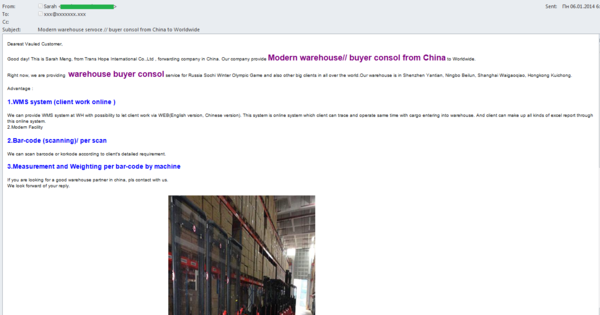 In September, 2013 Jacques Rogge announced that Tokyo would host the 2020 Olympics. While Japan was celebrating their win, some fast-thinking Chinese manufacturers from the silicone industry thought up a way of exploiting the news to promote their goods. In their spam messages they congratulated Japanese citizens and attached a couple of photos from the announcement ceremony in Buenos Aires. They signed off their letter by offering to produce a variety of Olympic themed goods.

Spammers make use of lots of different tricks to attract new customers, but cooperating with businesses like this is always going to be risky. Do not be fooled by promises or references to big names or events – none of these guarantees you will actually receive high quality goods or services. In fact, the companies may even turn out to be frauds, and disappear without a trace once they have received an advance payment.

Olympic Games: Made in China