In summer 2020 we uncovered a previously unknown multi-module C++ toolset used in highly targeted industrial espionage attacks dating back to 2018. Initially the reason for our interest in this malware was its rarity, the obviously targeted nature of the campaign and the fact that there are no obvious similarities with already known campaigns at the level of code, infrastructure or TTPs. To date, we consider this toolset and the actor behind it to be new. The malware authors named the toolset “MT3”; following this abbreviation we have named the toolset “MontysThree”. 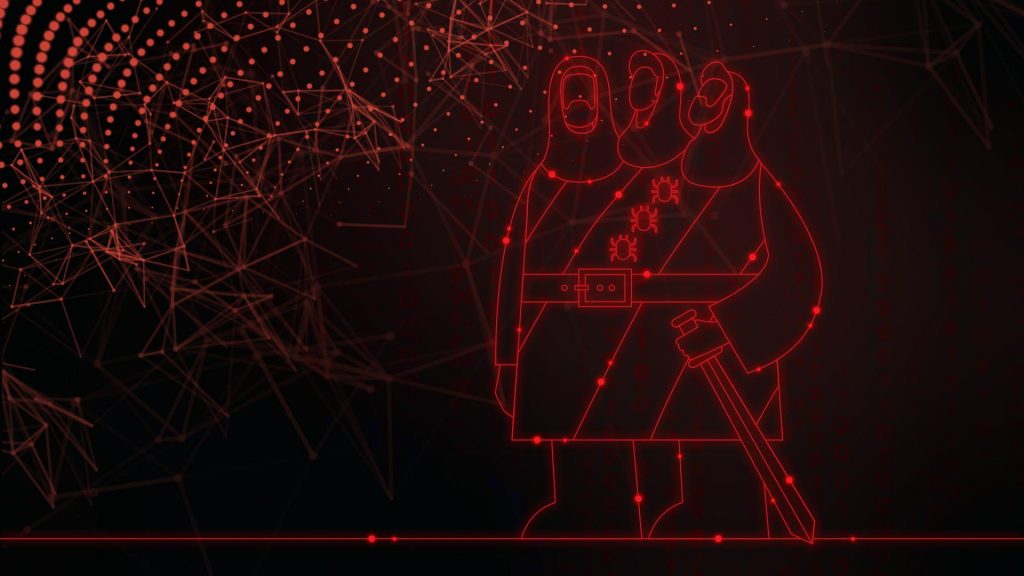 Following the MT3 abbreviation we named the toolset MontysThree

The malware includes a set of C++ modules used for persistence, obtaining data from a bitmap with steganography, decryption of configuration tasks (making screenshots, fingerprinting the target, getting the file, etc.) and their execution, and network communications with major legitimate public cloud services such as Google, Microsoft and Dropbox. MontysThree is configured to search for specific Microsoft Office and Adobe Acrobat documents stored in current documents directories and on removable media. The malware uses custom steganography and several encryption schemes: besides custom XOR-based encryption, the modules rely on 3DES and RSA algorithms for configuration decryption and communications.

MontysThree contains natural language artifacts of proper Russian language and configuration that seek directories that exist only on Cyrilic localised Windows versions. While most external public cloud communications use token-based authorisation, some samples contain email-based accounts for them, which pretend to be a Chinese lookalike. We consider these names to be false flags. Many more artifacts suggest that the malware was developed by a Russian-speaking actor and is targeting Cyrillic Windows versions.

How the malware spreads

The initial loader module is spread inside RAR self-extracting archives (SFX) with names related to employees’ phones list, technical documentation and medical test results. There are no lures, only PE files (masquerading a .pdf or .doc file), but such titles are now a typical trick used in spear-phishing – “corporate info update” or “medical analysis results”. One of the loaders (MD5 da49fea229dd2dedab2b909f24fb24ab) has the name “Список телефонов сотрудников 2019.doc” (“Employee phone list”, in Russian). Other loaders have the names “Tech task.pdf” and “invitro-106650152-1.pdf”. The latter is the name of a medical laboratory in Russia. All of them seem like typical spear-phishing tricks. The SFX script is as follows:

On execution, the SFX script calls the Open() function (we’ll return to this exported name) of the decompressed loader executable in the %TEMP% directory and deletes it. Judging by the filename, it most likely imitates medical analysis results, given that “Invitro” is a prominent medical laboratory in Russia. This initial PE32 is the first loader module.

How modules work and communicate 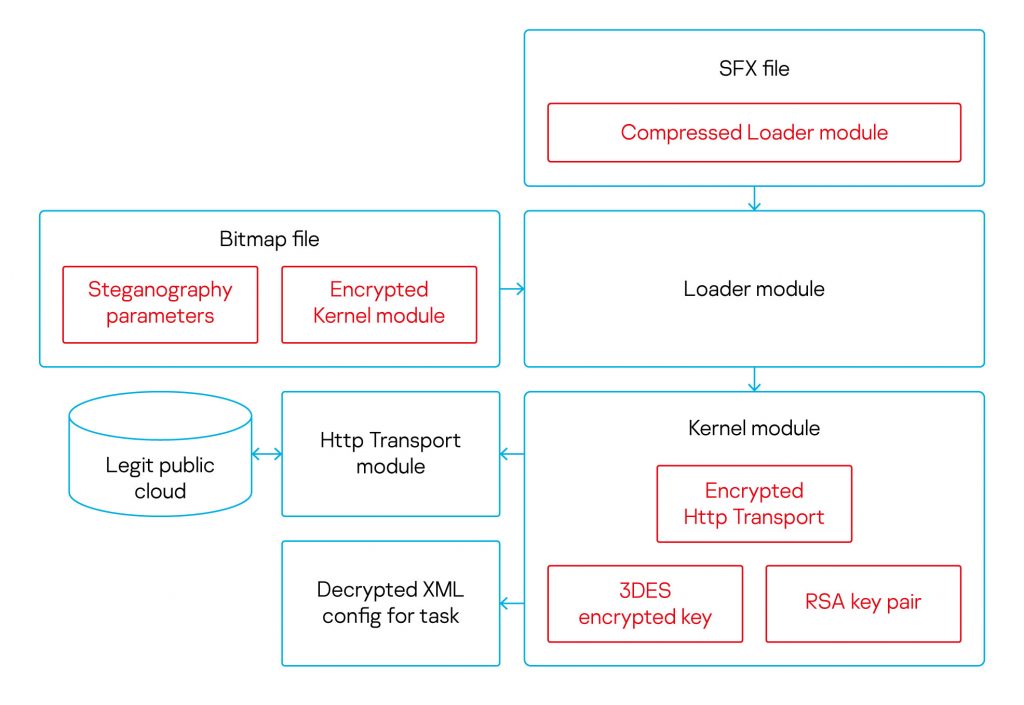 The diagram above shows the overall execution flow of the MontysThree modules. Four modules and their features are listed in the table below. The modules share common communication conventions. When dealing with shared data, such as the configuration and detailed execution log, the malware initializes the structure in thread local storage (TLS), which in its turn refers to heap structures. Interestingly, besides RAM, the execution log is stored on disk in a file, encrypted with a one-byte XOR.

The entry point DllEntryPoint() works just like a construtor, which allocates the structure with TlsAlloc() and saves it in a global variable. Modules must export a function named Open(), which takes no parameters (but could parse the command line) and returns a four-byte error code.

If the filename of the bitmap containing the steganography-encrypted data is provided to the loader as an argument, the loader decrypts the next stager from the pixel array. In the first iteration, it extracts the steganography parameter data. To do so, the algorithm takes the last bits of the bytes.

The IID, IParam and ISize parameters are kept in the first 384 bytes of the pixel array, meaning that only the last bit of every pixel array’s byte is needed. As a result, the module gathers 48 bytes of steganography configuration structure with the fields, determining the next decryption stages.

After extracting the steganography parameters, the next stager is decrypted using a two-step algorithm. Firstly, the IParam algorithm chooses the bits from the pixel array’s bytes. Then, if IID equals 2, a custom dexoring operation using a four-byte round key is applied on the gathered bytes. The initial key for the first four-byte decryption has the hardcoded value 0x23041920. Then the formula for the round XOR key for the next bytes is:
key ^= 8 * (key ^ (key << 20))

We consider this steganography algorithm to be custom made and not taken from some open source third-party repository. Surprisingly, the decryption result is not injected into some process’s memory, but dropped to disk as a file named msgslang32.dll. The loader then simply uses the Windows API functions LoadLibraryW() and GetProcAddress() to run the next stager’s Open() function, as we previously saw with the loader module.

The kernel module contains three encryption keys used for configuration decryption and C2 communications. Public and private RSA keys are stored in the .data section as PUBLICKEYBLOB and PRIVATEKEYBLOB respectively. These are used to encrypt C2 communications and to decrypt the 3DES key as well. The third 3DES key is also stored in the .data section in its encrypted form; this key is used to decrypt an embedded .cab archive containing the XML config. To decompress the .cab archive the module uses Window’s standard system utility, “expand.exe”. We’ll see another common software usage in the HttpTransport module.

The XML configuration contains valuable data that helps us understand the campaign operator’s interest. It is structured using various “tasks” for the malware, such as fingerprinting the target using its OS version, process list and capturing screenshots; but also grabs the list of users’ recent documents with any of the extensions .doc, .docx, .xls, .xlsx, .rtf, .pdf, .odt, .psw, .pwd from the several recent documents directories in %USERPROFILE% and %APPDATA%, including %APPDATA%\Microsoft\Office\Последние файлы. This folder name translates to “Recent files” in Russian, suggesting that the malware is aimed at Cyrillic localised Windows versions.

The decrypted config structure is as follows:

While the samples we looked at didn’t contain RTTI information, the execution logs allowed us to recover the C++ class names. After the kernel module parses the tasks from the configuration into memory, the main class that processes the instruction is CTask. CTask’s IoControl() method is in charge of handling the corresponding tasks and in turn runs the following methods:

All methods used for external communications first decrypt the HttpTransport module and use it to transmit the corresponding data RSA-encrypted. The RSA keys in use are the same aforementioned keys used to decrypt the 3DES config key. In a separate Window procedure, the malware monitors if a USB device is plugged in, searching for files of interest.

The HttpTransport module exists as four encrypted chunks of data inside the .text section of the kernel module. When the kernel needs to communicate, it decrypts this module and, as usual for MontysThree, runs the Open() function, passing command line arguments.

Depending on the arguments transmitted from the kernel module, the module may upload or download content using RDP, WebDAV, Citrix and HTTP protocols. Downloading data from Google and Dropbox public services using user tokens is implemented in HttpTransport as well. In case of HTTP GET/POST requests, the malware would receive a steganography bitmap picture using Windows API HTTP-related functions from a corresponding URL.

The aforementioned communication protocols themselves aren’t implemented inside the module. The malware authors make use of legitimate Windows programs like RDP, Citrix clients and Internet Explorer already installed on the target’s machine. For example, the module executes a task to send some data to a URL and receive the reply through an RDP connection as follows: edit the .rdp file to silently run Internet Explorer on the remote machine; paste the URL to the browser via the clipboard; wait and paste the contents to the opened web page via the clipboard as well; wait and receive the result through the clipboard again.

To copy data, the malware literally sends Ctrl+C, Ctrl+V and Ctrl+A. Perhaps it’s the first time we have seen such a method of “RDP communication”. The Citrix communication is done using a similar procedure: the malware doesn’t implement the protocol but rather searches for Windows Quick Launch .lnk for XenApp pnagent.exe, runs Internet Explorer remotely and communicates with it through the clipboard using special keyboard shortcuts.

Dropbox and Google data upload and download relies on another principle: its implementation uses the custom class CSimpleHttp to authenticate and send HTTP requests. For WebDAV communication, the developers simply use the “net use” Windows command.

This auxiliary module is in charge of achieving persistence on the host. It changes the .lnk files in the Windows Quick Launch panel to run the loader along with legitimate applications such as browsers when the user executes them using the modified link.

Who is behind this malware

As we mentioned at the beginning, to date we have observed no similarities or overlaps with known campaigns in terms of TTPs, infrastructure or malware code. So far, we attribute this activity and the use of MontysThree to a new actor. Some samples contain account details used for communicating with public cloud services, which pretend to be of Chinese origin. Taking into consideration all the aforementioned Cyrilic artefacts, we consider these account names to be false flags.

We assume that the actor behind MontysThree is both Russian-speaking and is going after Russian-speaking targets. Some of the filenames of the RAR SFX archives used for spreading the malware were written in Russian and referenced a Russian medical laboratory, used to entice the user to open the file. The XML configuration showcased data fields and Windows titles written in Russian, as well as specific folder paths that exist on Cyrilic localised versions of Windows. We also saw some grammatical errors in the malware’s English log message strings.

Typically we see targeted malware that is mostly going after governmental entities, diplomats and telecom operators, which are fruitful for state-sponsored actors. Industrial espionage cases like MontysThree are far more rare.

The overall campaign sophistication doesn’t compare to top notch APT actors in terms of spreading, persistence method. And some aspects of the malware – logging in RAM and files at the same time, keeping the encryption keys in the same file, running an invisible browser on the remote RDP host – seem immature and amateurish in terms of malware development.

On the other hand, the amount of code and therefore effort invested, in MontysThree is significant. The toolset demonstrates some tech-savvy decisions: Storing 3DES key under RSA encryption, custom steganography to avoid IDS and the use of legitimate cloud storage providers to hide the C2 traffic.

MontysThree: Industrial espionage with steganography and a Russian accent on both sides