Last week we received a mass mailing that at first glance appeared no different from the usual mailbox clutter. The messages were in German and advertised an online casino. Nothing out of the ordinary there – after all, gambling-themed spam is one of the most popular in the German-speaking realms of cyberspace. 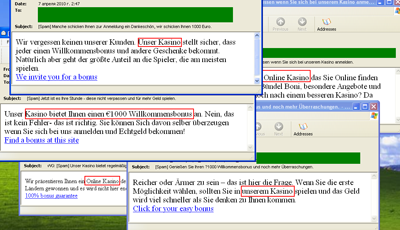 But after a closer inspection, these messages turned out to be of much more interest – all the links in the messages led to pages created on legitimate sites that had been compromised. The links looked like this: *******.com/news_.php or *******.com/1500.php.

Of course, there’s nothing new in hacking a site and using it to host pages that advertise Viagra or fake designer goods. Spammers have been using this approach to bypass spam filters for quite some time now.

The method may not be new, but it’s also not that common, mainly because hacking a site is a real hassle. It is much easier for spammers to create doppelganger sites with unpronounceable names on second-level domains they have purchased or to use the services of short URLs.

The messages were also of interest simply because they are aimed at German-speaking users. This method of bypassing spam filters by German spammers was, until now, practically unheard-of. And then suddenly this burst of mass mailing using a large number of legitimate sites. And the types of sites being used vary. Most of them are part of the .com, .org and .net domains. About half the compromised sites are in Spanish and Portuguese. One of them was also infected by a Trojan program. 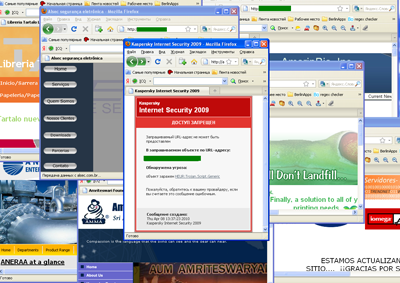 The pages created on the hacked sites automatically redirected users to two sites: *****casinos.com from the news_.php pages, and *****play.biz from the 1500.php pages.

It remains to be seen which of the many techniques applied by Russian and US spammers will be next.