We’ve already written about malware which encrypts files and then demands payment for decryption on several occasions.

These Trojans were found mostly in Russia. However yesterday we came across a worm with a German (speaking) background, Email-Worm.Win32.Skowor.b.

It doesn’t have true Email-Worm functionality, but as it’s closely connected to Email-Worm.Win32.Skowor.a we have decided to keep it in the same class.

In contrary to programs like GPCode, Skowor is able to replicate; it tries to spread via a share that it creates.

When installed, the worm displays a message telling the user that s/he has 5 pc reboots in order to get a password which can be used to uninstall the worm. If the user doesn’t do this, the worm will encrypt a number of important files and change the Administrator and current user password.

The worm also changes the IE start page to the author’s website. 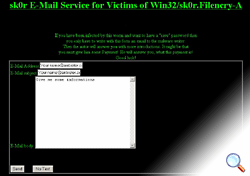 Fortunately, the worm’s code is buggy and only some functions seem to work.
In tests we conducted, the worm wasn’t able to encrypt files, change passwords, display the warning message, or change the IE start page.

I’m also happy to report that the author’s website was taken down yesterday evening.

None the less it’s a sign of what is to come.

File encryptor moves to the west