Recently, we started receiving suspicious events from our internal sandbox Exploit Checker plugin. Our heuristics for supervisor mode code execution in the user address space were constantly being triggered, and an executable file was being flagged for further analysis. At first, it looked like we’d found a zero-day local privilege escalation vulnerability for Windows, but the sample that was triggering Exploit Checker events turned out to be the clean signed executable GundamOnline.exe, part of the multiplayer online game Mobile Suit Gundam Online from BANDAI NAMCO Online Inc.

The initial sample is packed using a custom packer and contains anti-analysis techniques that complicate static analysis. For example, it tries to detect if it’s being launched inside a virtual machine by performing a well-known VMware hypervisor detection routine. It first loads the EAX register with the hypervisor magic value VMXh, and the ECX register with the value 0x0A, which is a special command to receive the hypervisor version. Then it performs an ‘in’ command to the VMware hypervisor IO port 0x5658. If the EBX register is overwritten with VMXh as a result of that operation, it means the executable file is running on the VMware machine.

Our sandbox execution logs showed that the user space memory page is called from the driver bandainamcoonline.sys immediately after IOCTL request 0xAA012044 to device object \.Htsysm7838 that is created by the driver. The driver itself is installed just before that. It is first dropped to the directory C:WindowsSysWOW64 by a GundamOnline executable, loaded using NtLoadDriver() and deleted immediately afterwards.

Normally, this kind of behavior should not be allowed due to SMEP (Supervisor Mode Execution Prevention). This is a security feature present on the latest Intel processors that restricts supervisor mode execution on user memory pages. Page type is determined using the User/Supervisor flag in the page table entry. If a user memory page is called while in supervisor execution mode, SMEP generates an access violation exception and, as a result, the system will trigger a bug check and halt. This is commonly referred to as a BSOD. 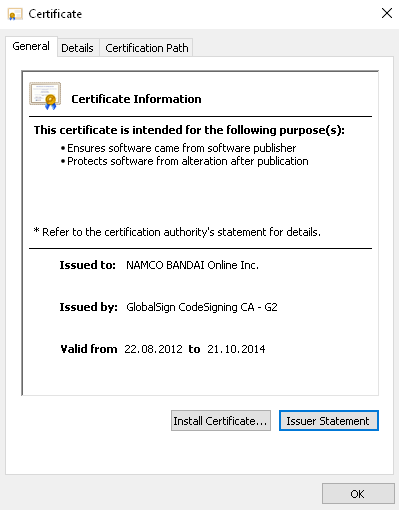 The dropped driver itself is a legitimate driver, signed with a certificate issued to NAMCO BANDAI Online Inc.

The certificate validity period tells us two things. First, this certificate has been valid since 2012, which could mean that the first vulnerable version of the driver was released around the same time. However, we were unable to find one; the earliest sample of bandainamcoonline.sys that we found dates back to November 2015. Secondly, because it expired more than three years ago, you could be forgiven for thinking it’s impossible to install a driver signed with this certificate in a system. Actually, there’s nothing stopping you from installing and loading a driver with an expired certificate validity period.

In order to find the cause of the heuristics trigger, we need to do a static analysis of the driver itself. In the DriverEntry function it first decodes the device object name string in memory, and then creates the device \.Htsysm7838. The other two encoded strings – bandainamcoonline and bandainamcoonline.sys – are not used in the driver.

The driver itself is very small and contains only three registered major functions. Function IRP_MJ_DEVICE_CONTROL, which handles requests, accepts only two IOCTLs: 0xAA012044 and 0xAA013044. When called, it checks the size of the input and output buffers and eventually calls the ExecuteUserspaceCode function, passing on the contents of the input buffer to it.

The function ExecuteUserspaceCode performs a single check on the input buffer, which contains a pointer to a user space function or a shellcode, and disables SMEP while saving old CR4 register values. It then calls that function, passing it a pointer to the MmGetSystemRoutineAddress as an argument. After that it restores the original register state, re-enabling SMEP.

To be able to directly call the user function from the provided pointer driver it is necessary to remove a specific bit in the CR4 register first to temporarily stop SMEP, which is what the DisableSMEP function does. The original CR4 values are then restored by the EnableSMEP function.

The vulnerability in this case is that other than the basic checks on the format of the input buffer, no additional checks are done. Therefore, any user on the system can use this driver to elevate their privileges and execute arbitrary code in the Ring 0 of the OS. Even if the driver is not present in the system, an attacker can register it with Windows API functions and exploit the flaw.

We realized that this vulnerability looks exactly like the one found in Capcom’s driver last year.

Binary diffing bandainamcoonline.sys and capcom.sys proves exactly that, showing there are almost no differences between the two drivers. The only slight variations are the encoded strings and digital signatures. Because the earliest sample of the vulnerable driver that we’ve been able to find dates to November 2015, it can be assumed that this vulnerability first appeared in the bandainamcoonline.sys driver – almost a year before a similar driver was used by Capcom.

We believe both drivers were almost certainly compiled from the same source code, as a part of an anti-hacking solution to prevent users from cheating in the game. The presence of functions that implicitly disable and re-enable SMEP show that this design decision was intentional. But because the driver makes no additional security checks, any user can call and exploit the vulnerable IO control code by using Windows APIs such as DeviceIoControl(). This essentially makes the driver a rootkit, allowing anyone to interact with the operating system at the highest privilege level. In fact, we found multiple malware samples (already detected by our products) using a previously known vulnerability in capcom.sys to elevate their privileges to System level.

After finding the vulnerability we contacted BANDAI NAMCO Online Inc. The vendor responded promptly and released a patch three days later. They removed the driver altogether, and it is no longer loaded by the game executable. This is very similar to what Capcom did, and is perfectly acceptable in this case.

Finding this vulnerability wouldn’t have been possible without our Exploit Checker technology, which is a plugin for our sandbox, and can be also found in KATA (Kaspersky Anti Targeted Attack Platform). The technology was designed to monitor suspicious events that occur at the earliest post-exploitation phases and can detect common techniques used in exploits, such as ROP, Heap Spray, Stack Pivot, and so on. In this particular case, multiple heuristics for executing code in supervisor mode in the user address space were triggered, and the sample was flagged for further analysis. If a token-swapping attempt was performed to elevate process privileges, a technique that’s widely used in LPE exploits, it would have been automatically detected by Exploit Checker heuristics.