It was the last weekend of May and just like every year, hackers, forensic experts and pentesters met at the Universal Hall in Berlin for the BerlinSides conference. ‘A con from hacker for hacker’. This years motto is ‘electrifying’ and the badges and shirts show the picture of Nikola Tesla.

BerlinSides is the successor of the PH-Neutral conference held by FX, who once said he’s going to host his conference for ten years. After that, Aluc stepped in and now runs the BerlinSides conference since 2010.

Start was right after the PXE conference ends on Friday 27th of May and it lasts for four days. As usual, the last day got labeled “OpSec 4 Nerds” and held in a Dojo. It’s about “hand to hand combat” and optional to all attendees who have a good health insurance. Today is the last day of the conference and the exercises in the Dojo are going on right now.

The schedule of the conference can be found here: http://berlinsides.org/?page_id=1911

In contrast to the Chaos Computer Congress, this conference is by invitation only and just like in Las Vegas, what’s happening inside of BerlinSides stays inside. No journalists, cameras or any recording devices are allowed. Speakers can go into details and give some unique insights in projects, incidents and new vulnerabilities.

0x100 people attended the conference this year and beside the talks I also enjoyed the networking, music and party. I met people I haven’t seen for a while, some I never met before and we had some good discussions.

Kaspersky Lab is the premium sponsor of this years’ conference and we are happy to see such great events and to support the community.

My colleague Stefan Ortloff held the opening talk titled”Cross-Platform Malware To Attack The Bitcoin-Sphere” and gave some insights in an ongoing investigation conducted by himself. 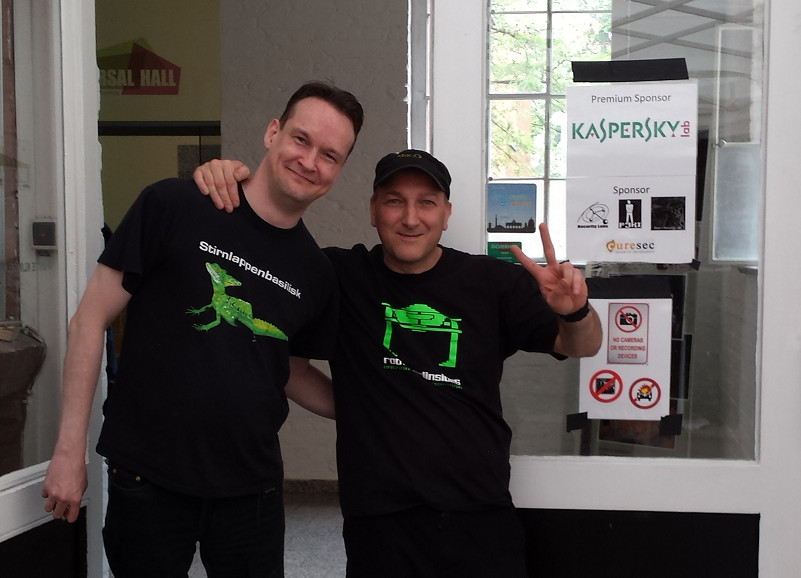 (Host Aluc on the right, me on the left side)

Due to the nature of this conference, there aren’t any further details I can add to this blog, but I’d like to thank Aluc for his commitment and I look forward attending next year again!