In the middle of last year, my colleagues published a blogpost about a new generation of ransomware programs based on encryptor Trojans, and used the example of the Onion family (also known as CTB-Locker) to analyze how these programs work.

Last autumn, we discovered the first sample of an interesting new encryptor, TorLocker (this is the original name given by the creator); later on, TorLocker was used to launch an attack on Japanese users. When it was discovered on 24 October, 2014, the proactive components in Kaspersky Lab’s products already detected this piece of malware; later on, it was assigned the verdict ‘Trojan-Ransom.Win32.Scraper’.

Trojan-Ransom.Win32.Scraper encrypts the victim’s documents and demands a ransom ($300 or greater) to decrypt them

All the TorLocker samples that we have obtained belong to one of two versions: 1.0.1 (in English) or 2.0 (in English and Japanese.) There are only slight differences between them: 1) in the method employed to obfuscate code, and 2) in the sources used for additional modules: in the first version, the additional modules are extracted from the data section, while in the second version, they are downloaded from the Internet (from file hosting services or from compromised sites). Also in the second version, some strings were relocated from the data section into the code section, and dangling (redundant, not used) bytes emerged. The file encryption algorithm is the same in both versions.

Common features and peculiarities of this malware family

Our analysis has shown that Trojan-Ransom.Win32.Scraper was presumably written in assembler, which is unusual for this type of malware. The Trojan uses the Tor network to contact its “owners” – something that is apparently becoming a norm for the new generation of ransomware – and the proxy server polipo. This piece of malware often lands on users’ computers via the Andromeda botnet.

Trojan-Ransom.Win32.Scraper encrypts the victim’s documents and demands a ransom ($300 or greater) to decrypt them. If the malware gets deleted by a security product after the files are encrypted, the Trojan installs bright red wallpaper on the Desktop, containing a link to its executable file. Thus, users have a chance to re-install the Trojan and report to its owners that they have paid the ransom: to do so, users need to enter payment details in a dedicated TorLocker window. This data will be sent to the C&C server which will either reply with a private RSA key or notify that there was no payment. 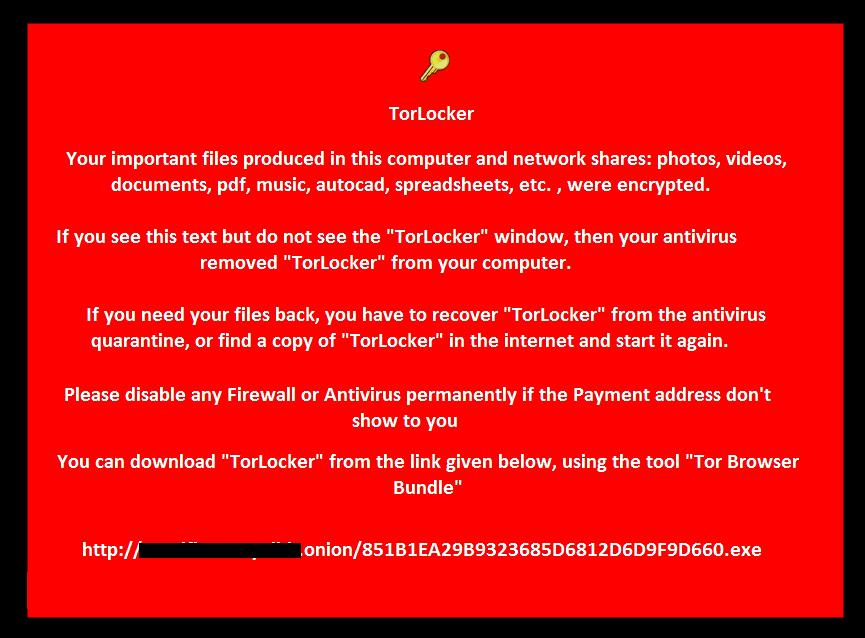 This typical representative of the Scraper family is packed with UPX. The data section is additionally encrypted with AES with a 256-bit key. In the code section, between the assembler instructions, there are a large number of redundant bytes that are not used in any way. 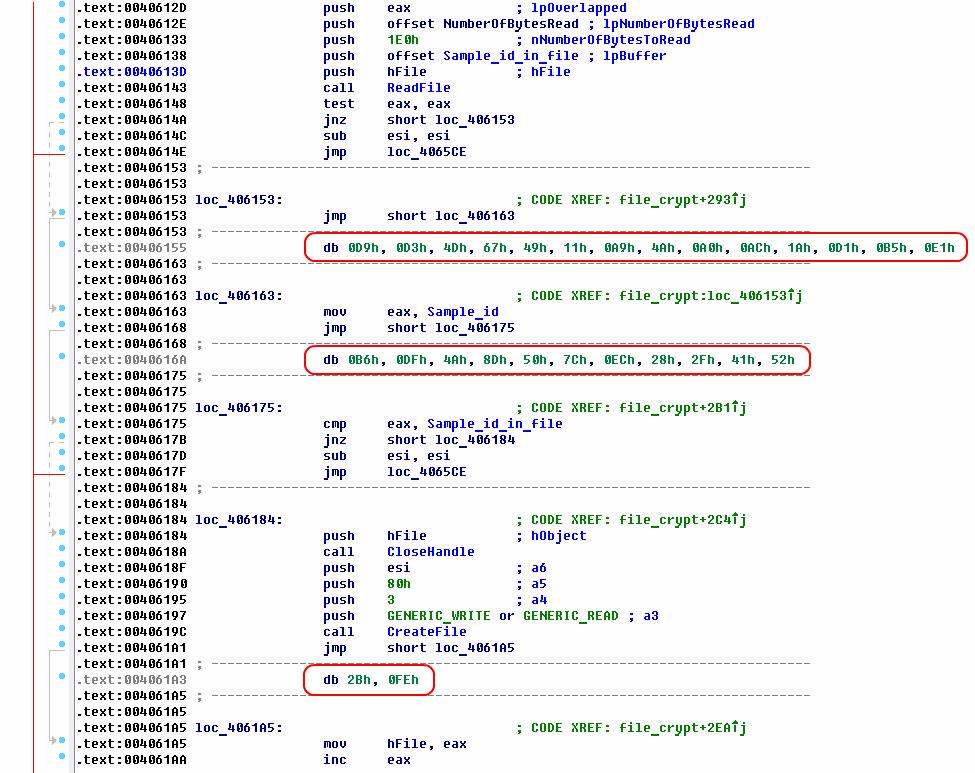 The redundant bytes in the encryptor’s body

The method of submitting string arguments to functions is just as unusual. The strings are located directly in the code section; in order to submit a string as an argument to a function, the pointer to that string is placed into the stack by way of calling (using the ‘call’ instruction) the instruction following the string. As a result, the return address (which is identical to the pointer to the string) is placed into the stack:

Once launched, the Trojan starts by decrypting its data section with a 256-bit AES key. The first 4 bytes of this key are used as a sample ID, added to the end of the encrypted files. Then the Trojan is copied to a temporary folder, and a registry key for that copy’s autorun is created in the following registry section:

Next the Trojan creates several threads to do the following:

When launching, Trojan-Ransom.Win32.Scraper chooses one of the 128 public RSA keys hardcoded in it, depending on the victim computer’s name and the serial number of the logical drive. The number (n) of the public RSA key is calculated as following:

Each sample contains its own set of public keys.

The user’s files are encrypted with AES-256 with a randomly generated one-time key; an individual encryption key is created for each file. Then, a 512-byte service section is added to the end of each file, which consists of 32 bytes of padding, 4 bytes of the Trojan’s identifier, and 476 bytes of the employed AES key encrypted with RSA-2048.

If the file size is greater than 512 MB + 1 byte, then of the first 512 MB of the file get encrypted. The encrypted data is written on top of the original, non-encrypted data; no new file is created, and the old file is not deleted. 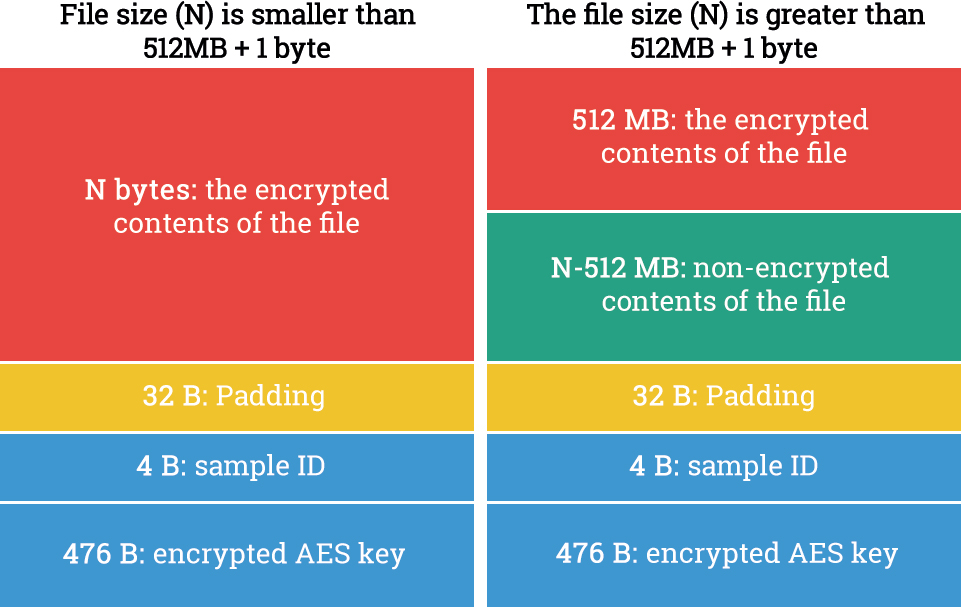 The Structure of an encrypted file

The Trojan does not need Internet access to encrypt the files.

In order to obstruct the analysis, some of the detected samples of Trojan-Ransom.Win32.Scraper were additionally packed with the KazyLoader and KazyRootkit protectors along with UPX.

KazyLoader is a two-stage protector of executable files, written in .NET Framework. The protected executable is encrypted with AES, and then placed into the protector’s assets section as a color palette of a BMP image. 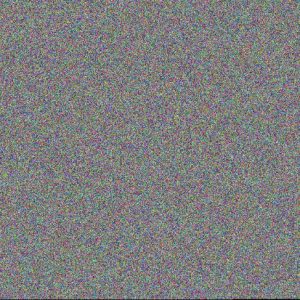 The image decryption module is encrypted by XORing with one byte, then divided into parts and also placed into the protector assets section in the form of strings LOADER0, LOADER1, … LOADER272.

The KazyRootkit protector is also written in .NET Framework and has a feature that can conceal processes in the Task Manager (taskmgr.exe) and conceal registry keys in the Registry Editor (regedit.exe) by deleting strings from ListView GUI elements with the help of WinAPI. Depending on its configuration, the protector may shut down without unpacking the file embedded in it, if it detects any of Sandboxie, Wireshark, WPE PRO or a code emulator.

The file to be protected is encrypted by XORing with a certain key, and then injected into the protector’s process. A large array of random bytes is stored in the protector’s overlay.

Trojan-Ransom.Win32.Scraper’s builder (i.e. the program with which to create new samples of the Trojan with specified configuration) is distributed via a partnership program and sold for a few bitcoins. We found two posts about selling the builder for TorLocker 2.0 in the ‘Evolution’ (now taken down) underground online store: 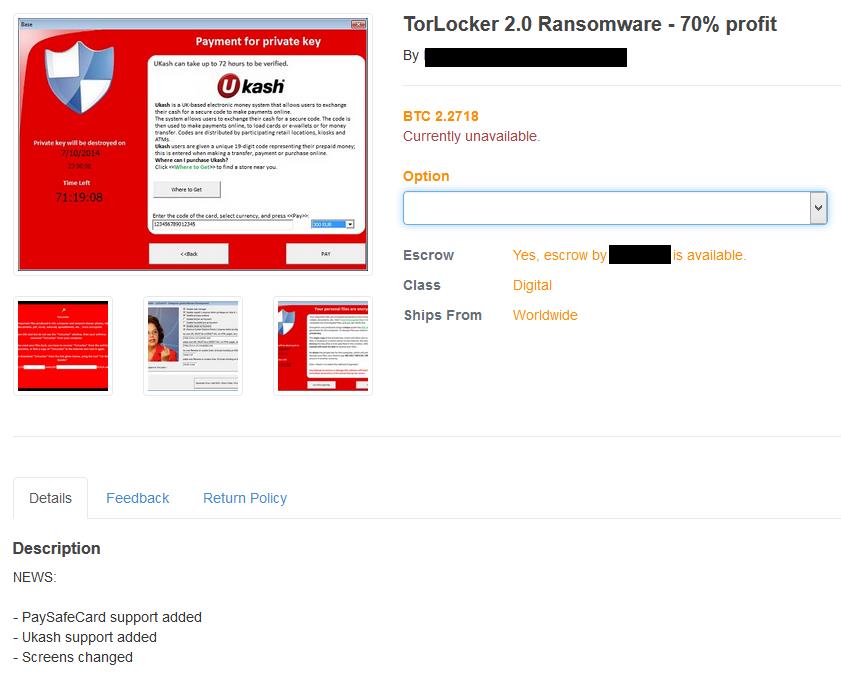 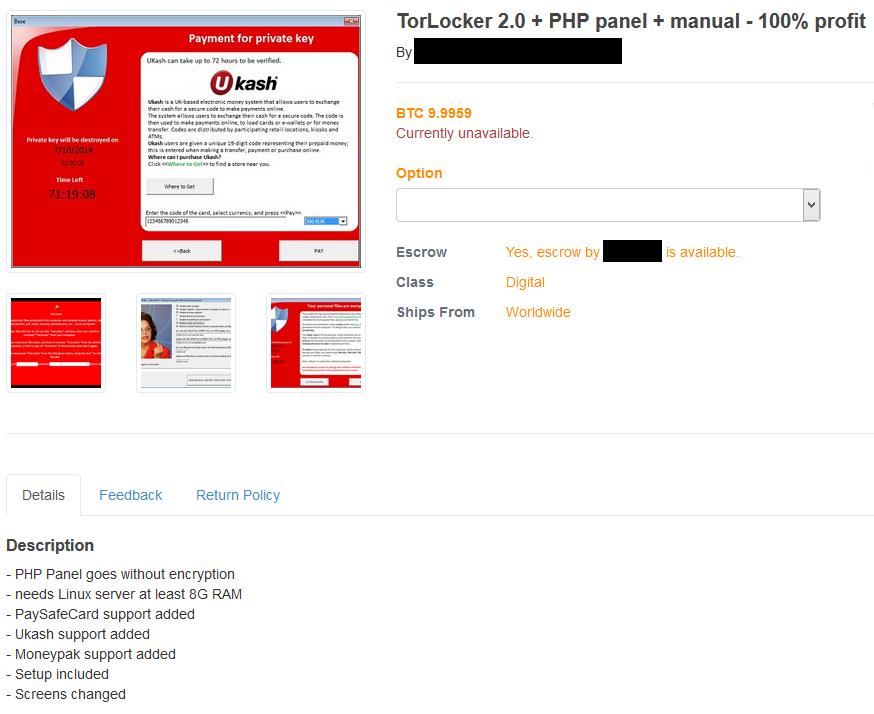 The published screenshot of the builder suggests that the cybercriminal can change some of the encryptor’s settings, as follows: 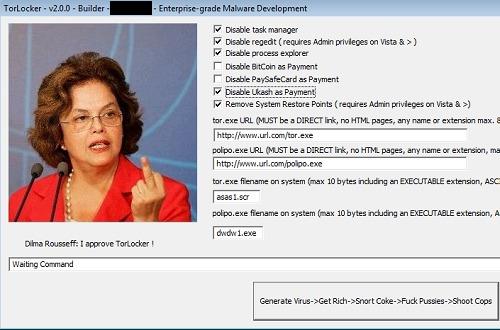 A screenshot of the builder’s window

On the underground e-store’s website, there are 11 reviews of the vendor of the Trojan-Ransom.Win32.Scraper builder, posted between 8 May 2014 and 17 January 2015. 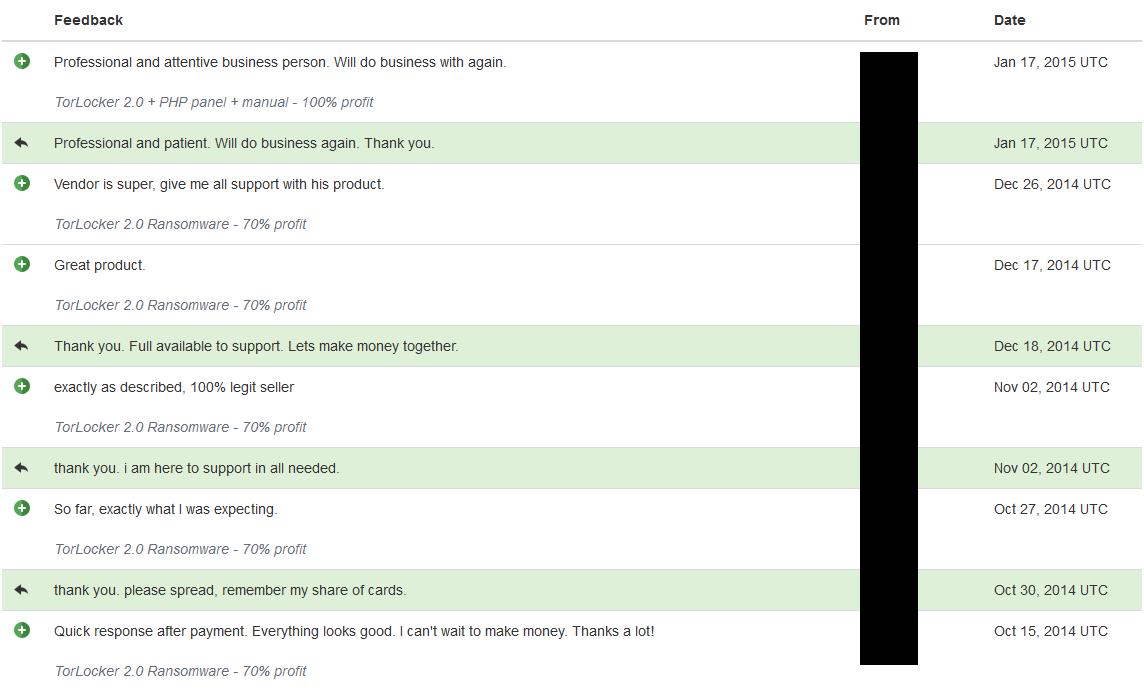 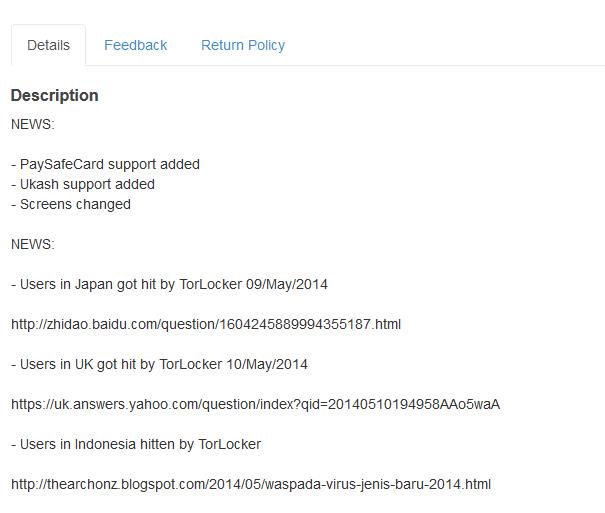 A brief description of TorLocker’s operating principles and a comparison with CryptoLocker is also provided.

At the decryption stage, when the ransom payment is received, Trojan-Ransom.Win32.Scraper contacts the cybercriminals’ C&C servers via the Tor network and the polipo proxy server, to receive a private RSA key. With this key, the Trojan decrypts the AES key for each encrypted file, and then decrypts the files.

Although Trojan-Ransom.Win32.Scraper encrypts all files with AES-256 + RSA-2048, in 70%+ cases they can be decrypted because of the errors made during the implementation of cryptography algorithms. To restore the original files, Kaspersky Lab has developed the ScraperDecryptor utility, which can be downloaded from Kaspersky Lab’s technical support website.