When the first email arrived in one of my Gmail inboxes I thought it was just another phishing scam – report it and toss it into the trash. But then I thought, hold on… it made its way through all the Gmail spam filters, so why not take a quick look.

That was on 5 October, an email with a “NO REPLY.” alias in the Sender field was marked as unread and after clicking it, a Google recovery email opened. Next to its subject was a profile picture of a person I didn’t know. Well, I thought, hackers don’t tend to post their pictures on their own phishing emails. So I checked the details and it was an email from Brown University, located in Rhode Island, United States.

Could it be a spear phishing campaign against the university?

On second thoughts, it was only one email. Maybe the person was lured by some appealing content into clicking a link where he simply entered his username and password to a fake form that hijacked his credentials.

First incident: Yet another phishing email

Browsing through the body of the email, I got the impression that it was very well written and was not some first-timer’s attempt. Not many obvious mistakes. Can you spot any? 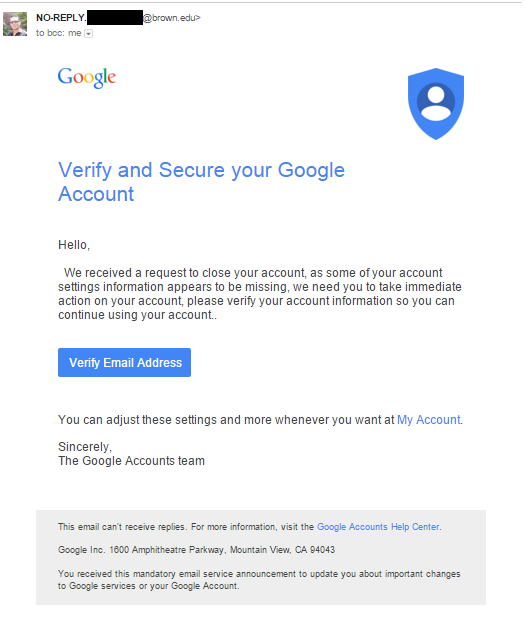 We could spot some more, but that’s enough for now.

With all that in mind, the picture is the first thing that immediately draws your attention. It’s because this is a valid Gmail account of a person named Ph****p P**g. This person works for Brown University and brown.edu email servers are actually hosted by Google. That means that the compromised account can initially send phishing emails to any Gmail user account without them hitting the spam folder – not until it’s being reported as spam.

After trying to notify Mr. P**g in every possible medium he existed in online, I finally gave up. We reported the phishing attempt registered as an ow.ly short link that redirects to a domain named after a song by a Nigerian rapper, and hosted on GoDaddy.

Two domain names have been identified so far; however, the IP address indicates massive use of phishing and even kits available for direct download and use. One of the domains found was the initial redirection URL from the malicious email short link and the other one was embedded in a PHP form action attribute, located within the phishing website’s /index.html page, masquerading as a legitimate Google recovery form. 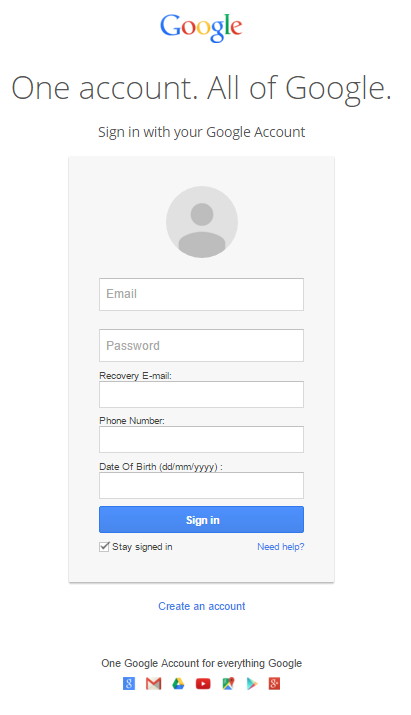 Here is the chain of events from the victim’s point of view:

20 October, 8:00AM, another email arrived. To my surprise, it had the same origin – brown.edu – but a different victim.

It was now a woman. Her name is Q***h T**n, a former employee of the university and a current LinkedIn employee. Her account was immediately deleted after we reported the scam to LinkedIn.

This email was different, suggesting that our threat actors have many templates at their disposal. However, the domains were the same. Since she is a former employee, it might mean her account was taken over while her account was disabled. It’s possible that the attackers took over a server that has modified privileges and they have managed to reactivate the dormant accounts of former employees.

We were the first to submit the URL to Virus Total, meaning it’s still fresh. No anti-viruses identified the link as malicious.

OWO NI BOYS and SHOKITI BOBO are both songs by Nigerian rappers. This suggests that the attackers are influenced by rappers such as Olamide and Kida Kudz or are trying to create this false sense for analysts.

The second piece of information was the Russian Google Drive logo found in second incident. Both creates assumptions about threat actors way of thinking, either by injecting false information or by making terrible mistakes.

One thing is for sure – Brown University is suffering from a few compromised accounts and this attack is still active.