While analyzing the CVE-2021-1732 exploit originally discovered by the DBAPPSecurity Threat Intelligence Center and used by the BITTER APT group, we discovered another zero-day exploit we believe is linked to the same actor. We reported this new exploit to Microsoft in February and after confirmation that it is indeed a zero-day, it received the designation CVE-2021-28310. Microsoft released a patch to this vulnerability as a part of its April security updates.

We believe this exploit is used in the wild, potentially by several threat actors. It is an escalation of privilege (EoP) exploit that is likely used together with other browser exploits to escape sandboxes or get system privileges for further access. Unfortunately, we weren’t able to capture a full chain, so we don’t know if the exploit is used with another browser zero-day, or coupled with known, patched vulnerabilities.


The exploit was initially identified by our advanced exploit prevention technology and related detection records. In fact, over the past few years, we have built a multitude of exploit protection technologies into our products that have detected several zero-days, proving their effectiveness time and again. We will continue to improve defenses for our users by enhancing technologies and working with third-party vendors to patch vulnerabilities, making the internet more secure for everyone. In this blog we provide a technical analysis of the vulnerability and how the bad guys exploited it. More information about BITTER APT and IOCs are available to customers of the Kaspersky Intelligence Reporting service. Contact: intelreports@kaspersky.com. 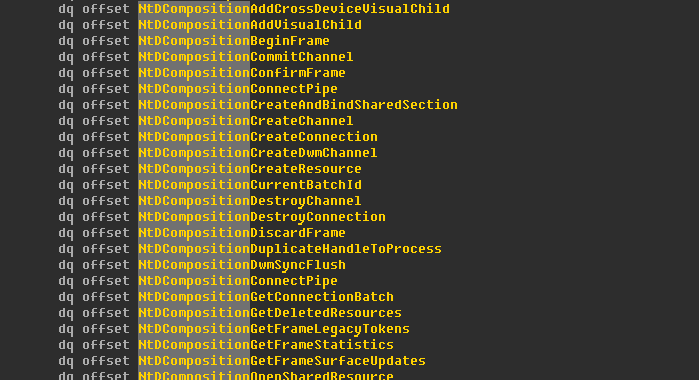 List of command IDs supported by the function DirectComposition::CApplicationChannel::ProcessCommandBufferIterator

While these commands are processed by the kernel, they are also serialized into another format and passed by the Local Procedure Call (LPC) protocol to the Desktop Window Manager (dwm.exe) process for rendering to the screen. This procedure could be initiated by the third syscall – NtDCompositionCommitChannel.

To trigger the vulnerability the discovered exploit uses three types of commands: CreateResource, ReleaseResource and SetResourceBufferProperty.

Format of commands used in exploitation

Let’s take a look at the function CPropertySet::ProcessSetPropertyValue in dwmcore.dll. This function is responsible for processing the SetResourceBufferProperty command. We are most interested in the code responsible for handling DCOMPOSITION_EXPRESSION_TYPE = D2DVector2.

Conditions which need to be met for exploitation in dwmcore.dll

These checks could be bypassed if an attacker is able to allocate and release objects in the dwm.exe process to groom heap into the desired state and spray memory at specific locations with fake properties. The discovered exploit manages to do this using the CreateResource, ReleaseResource and SetResourceBufferProperty commands.

At the time of writing, we still hadn’t analyzed the updated binaries that are fixing this vulnerability, but to exclude the possibility of other variants for this vulnerability Microsoft would need to check the count of properties for other expression types as well.

Even with the above issues in dwmcore.dll, if the desired memory state is achieved to bypass the previously mentioned checks and a batch of commands are issued to trigger the vulnerability, it still won’t be triggered because there is one more thing preventing it from happening.

As mentioned above, commands are first processed by the kernel and only after that are they sent to Desktop Window Manager (dwm.exe). This means that if you try to send a command with an invalid propertyId, NtDCompositionProcessChannelBatchBuffer syscall will return an error and the command will not be passed to the dwm.exe process. SetResourceBufferProperty commands with expression type set to D2DVector2 are processed in the win32kbase.sys driver with the functions DirectComposition::CPropertySetMarshaler::AddProperty<D2DVector2>(…) and DirectComposition::CPropertySetMarshaler::UpdateProperty<D2DVector2>(…), which are very similar to those present in dwmcore.dll (it’s quite likely they were copy-pasted). However, the kernel version of the UpdateProperty<D2DVector2> function has one notable difference – it actually checks the count of properties added to the resource.

The check for propertiesCount in the kernel mode version of the UpdateProperty<D2DVector2> function prevents further processing of a malicious command by its user mode twin and mitigates the vulnerability, but this is where DirectComposition::CPropertySetMarshaler::AddProperty<D2DVector2>(…) comes in to play. The kernel version of the AddProperty<D2DVector2> function works exactly like its user mode variant and it also applies the same behavior of checking property after it has already been added and returns an error if propertyId and storageOffset of the created property do not match the provided values. Because of this, it’s possible to use the AddProperty<D2DVector2> function to add a new property and force the function to return an error and cause inconsistency between the number of properties assigned to the same resource in kernel mode/user mode. The propertiesCount check in the kernel could be bypassed this way and malicious commands would be passed to Desktop Window Manager (dwm.exe).

Inconsistency between the number of properties assigned to the same resource in kernel mode/user mode could be a source of other vulnerabilities, so we recommend Microsoft to change the behavior of the AddProperty function and check properties before they are added.

The whole exploitation process for the discovered exploit is as follows:

Kaspersky products detect this exploit with the verdicts: