I thought it was a bit odd that we hadn’t come across files like this before, so I decided to tak a look at stats for this vulnerability: 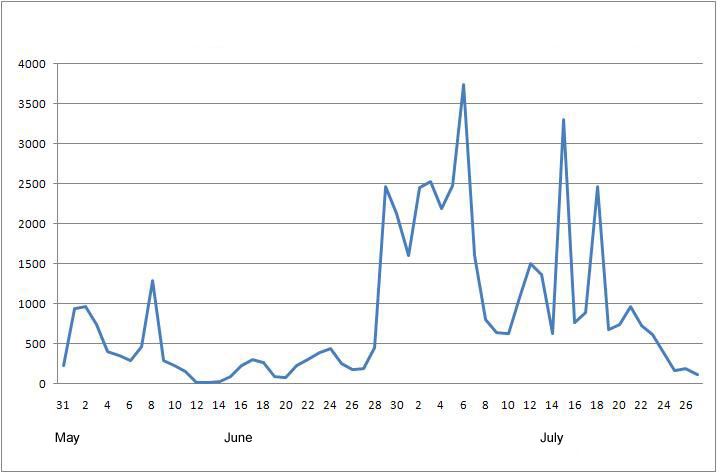 The graph shows that malware exploiting CVE=2010-0188 started spreading actively at the end of June. It was pretty much a rarity until then. Maybe the virus writers needed a few months to catch up with creating exploits for the new hole in Adobe – who knows?

When I took a closer look, it turned out that the PDF was mainly designed to download and launch another file, Trojan-Dropper.Win32.Zbot.cm. Which, in its turn, is mainly designed to secretly install Zbot (ZeuS) to the system and to combat antivirus software.

I was able to get a final example of Zbot, but it turned out to be encrypted and obfuscated. I then got its dump and decrypted strings, which included a clear link to the banking site under attack, the bot’s http requests and some of the commands used by the botnet C&C:

Part of the decrypted Zbot file

This is the first example of an encrypted Zbot variant spreading via CVE-2010-0188. Clearly, the guys behind this program aren’t sitting on their hands, but working on the most up-to-date methods of delivering their malware to end users.