November’s list of the 20 most widespread viruses is marked by the appearance of several new variations of the Mimail network worm, most notable is I-Worm.Mimail.c which heads the chart with 34.57% of all registered incidences. Six new modifications of Mimail made the top twenty in November, and altogether accounted for nearly 62%. This dominating performance is the result of the code from the Mimail family’s first variant being published on the Internet.

Mimail managed to crowd the previous month’s leader, I-Worm.Swen, down to third place, while the undisputed leader for 2003, Sobig.f, slid down to 11th place. Making their return to the stage are ‘old friends’ Klez and Lentin.

Other worms making their return to the Top Twenty are Dumaru and Lovelorn, with Dumaru.a quickly taking 8th position.

For November, Internet worms virtually monopolized the virus statistics, allowing Trojan programs a bit more than one half of one percentage point, while computer viruses were knocked completely off the list. 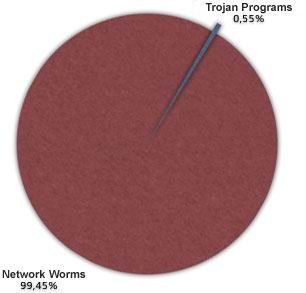