The festive season with its gifts, decorations and costumes can easily put a dent in your finances. No wonder then that after the holidays spam started appearing with suggestions on how to make some money. And increasingly spammers are using bitcoins – a cryptocurrency – as the bait. For instance, bitcoins can be earned in return for access to the computing power of a device. There are plenty of stories about millionaires who have made a fortune with the help of this currency, and spammers have been quick to exploit its current popularity.

Recently, bitcoin’s exchange rate has been steadily increasing (at the time of writing 1 bitcoin is worth $623), making it a rather attractive proposition.

Spammers are exploiting the popularity of the currency in different ways. One of the mailings offered to share the secret of a millionaire who made his fortune with bitcoins. The message stated that with the help of this secret, the recipient could make $1500 per day without even buying any bitcoins. 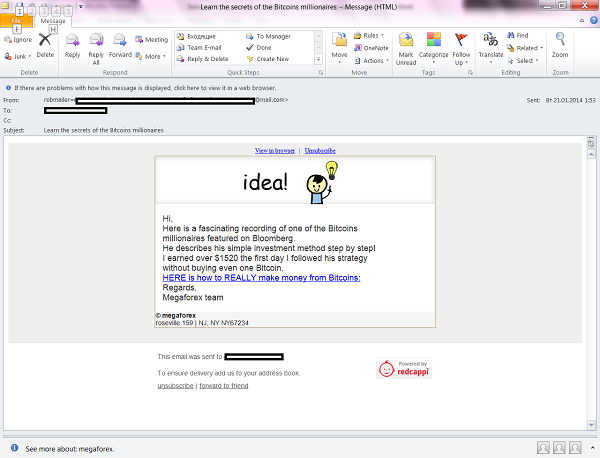 The link in the message led to a web page that contained promises of great wealth. In order to receive the software required for this type of income, the user had to enter his/her e-mail address. 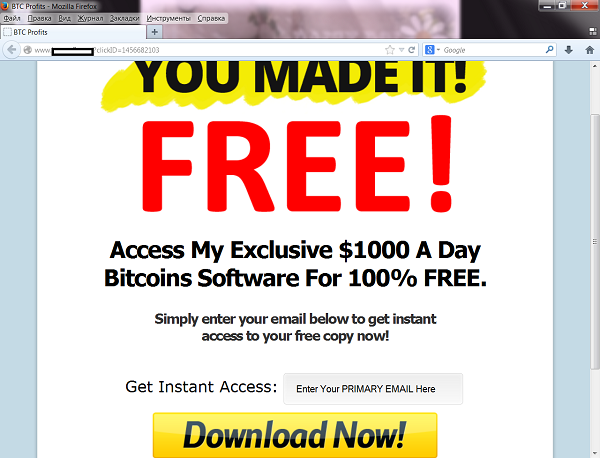 Those signing up for this offer are unlikely to make any money. Such offers usually conceal fraudulent activity and the people behind them are the only ones who actually make any money. The email address left on the site will end up in spammer databases, and the owner of the account will start receiving more and more “generous offers”.

Another mailing offered the chance to win bitcoins in a lottery. According to the message, the Lottery Committee chose the user for the bitcoin lottery, and the only thing he/she needed to do was to download and install a file until the end of the draw. Unfortunately, it turned out to be impossible to download and check the file in the message, so it’s unclear what would have happened. In any case, messages offering the chance to win huge sums of money in a lottery should always be treated with extreme caution. Downloading a file from a link enclosed in an email can easily damage your computer. 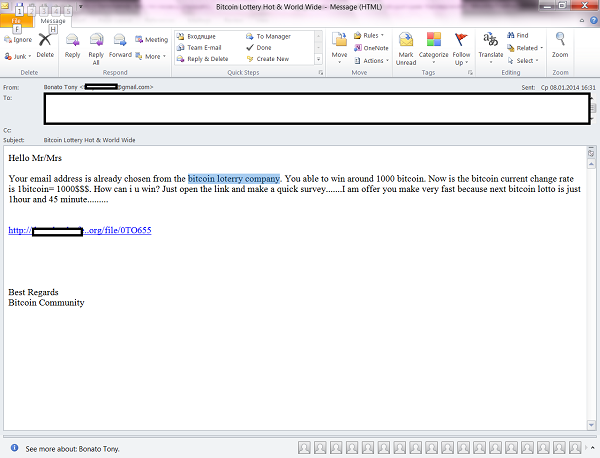 Another message offered a special program to earn bitcoins. In order to start earning a healthy, stable income, the user had to pay just $7. However, this is most likely to be a scam and the recipient would end up earning nothing; all the profit would be made by the fraudsters who sent out the offer. 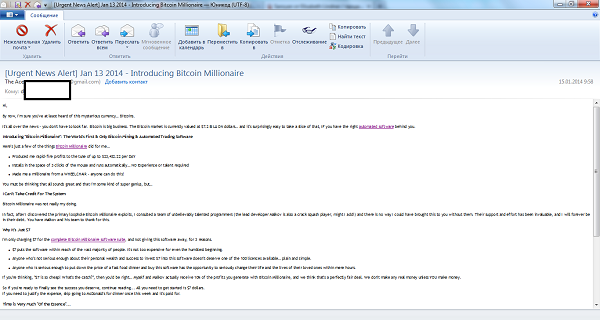 At the current time, the search for bitcoins is akin to a gold rush. The more bitcoins are produced, the harder it appears to be to obtain them. Initially, an ordinary PC was enough to make a profit from the currency. Now it is necessary to build special mining farms, which require large financial investments. But only these farms can produce new bitcoins, completing the difficult tasks that would take an ordinary computer 5-6 years. The bottom line is that it is impossible to earn lots of money with this virtual currency, no matter what the spammers promise in their letters. And that’s why those offers “to earn lots of money by spending just a couple of hours a day online” are not worthy of your attention.