The authors of malware use various techniques to circumvent defensive mechanisms and conceal harmful activity. One of them is the practice of hiding malicious code in the context of a trusted process. Typically, malware that uses concealment techniques injects its code into a system process, e.g. explorer.exe. But some samples employ other interesting methods. We’re going to discuss one such type of malware.

Our eye was caught by various samples for .NET that use the trusted application InstallUtil.exe from the Microsoft .NET Framework (information from Microsoft’s website: “The Installer tool is a command-line utility that allows you to install and uninstall server resources by executing the installer components in specified assemblies. This tool works in conjunction with classes in the System.Configuration.Install namespace”).

The technique was described by information security researcher Casey Smith aka subTee (Proof of Concept). Briefly, the console utility InstallUtil.exe runs a malicious .NET assembly, bypassing the entry point of the assembly; all malicious activity is then hidden in the context of the trusted process.

The spreading of malicious samples follows a standard pattern: they basically reach the user in a password-protected archive, and the executable file icons in most cases are chosen specially so that the victim perceives the file as a normal document or photo. We also encountered executable files masquerading as a key generator for common software. To begin with, the malicious content of the generator got inside the %TEMP% folder, where it was run later in the described manner.

All the malicious files we encountered were heavily obfuscated, which complicated their manual analysis. We took the sample 263dc85de7ec717e8940b1ccdd6ee119 and deobfuscated its strings, classes, methods, and fields. Here’s how the file looked before deobfuscation: 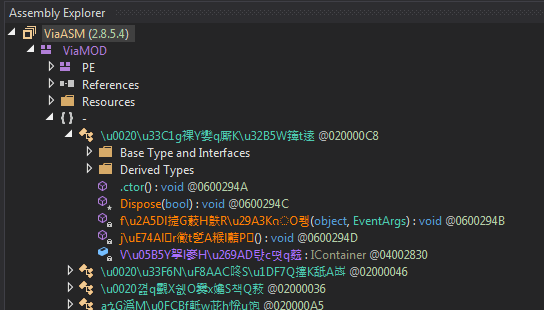 InstallUtil.exe allows file execution to start not from the .NET assembly entry point: execution begins from a class inherited from System.Configuration.Install.Installer. To facilitate manual analysis, this class was renamed InstallUtilEntryClass in the sample under investigation. The code in static class constructors is known to execute first when the assembly is loaded into memory, a feature utilized by the authors of this piece of malware.

Let’s examine the behavior of the malicious file in the order of methods execution. First up is FirstMainClass, since its constructor is marked with the keyword “static” and assembly execution begins with it:

The constructor does the following:

The method responsible for loading the assembly from the resource 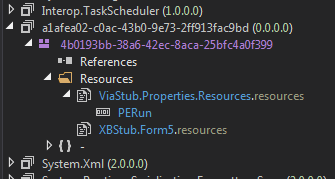 The assembly is unpacked from the resource and loaded into memory

The warning issued on deleting Zone.Identifier

Control then passes to the traditional entry point—the Main() method, which is located in the Form5 class:

The traditional entry point is the Main() method

We see that a WMI object is retrieved after a 30-second pause. Next, the ScriptControlClassInstance object is customized, which the language (Visual Basic script) and the body of the script are transferred to:

The script that runs the executable file using InstallUtil.exe

The AddCode() method adds and executes a VB script that runs the current assembly using InstallUtil.exe. After that, the current process is closed by calling Environment.Exit(0).

The functions of this class include:

Let’s sum up the interim results: all the actions described above (entrenchment in the system, elevation of privileges, startup from a trusted application) are essentially laying the foundation for the main task. Let’s move on to analyzing the next stage of the preparatory actions, which will take us closer to the heart of the malicious activity.

The malicious assembly contains, inter alia, five classes inherited from System.Windows.Forms.Form. Inheritance from the Form class is not accidental: in its inheritance hierarchy it implements several interfaces, one of which is IDisposable, which allows to override the Dispose() method for its own purposes. Dispose() methods are called by the garbage collector in order to free up unmanaged resources used by the class when closing or unloading the assembly. Now let’s look at the source code of the Dispose() method of the Form5 class: 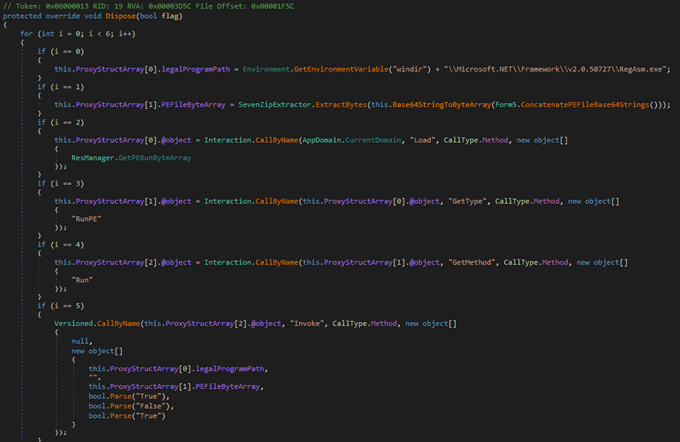 The overridden Dispose() method of the Form5 class

As we can see, various methods are executed at each iteration of the cycle, and the results are saved. Let’s take a closer look:

Knowing that the legalProgramPath variable contains the full path to the legitimate utility RegAsm.exe, PEFileByteArray contains the executable file in the form of a byte array, while the class name is RunPE; it is not hard to figure out that the Run() method employs the technique of hiding malicious code in the address space of the trusted process RunPE. This technique is widely known and described here, for instance.

Deep inside the Run() method, a legitimate utility process is created in CREATE_SUSPENDED state (the sixth parameter is 4u):

Eventually, the RegAsm.exe process is loaded in the address space and starts to execute the payload: the remote administration tool NanoCore Client. Only trusted processes remain in the list of running processes, and even an experienced user might not realize that the system is compromised:

RegAsm.exe was chosen as the “carrier” because (a) it is a legitimate utility from Microsoft, (b) it is located in the same directory as InstallUtil.exe, and (c) a utility from .NET Framework calling another utility from the same framework is less suspicious than calling, say, notepad.exe. In fact, the use of RegAsm.exe is not critical: the “carrier” could be any program that does not arouse the suspicion of security software and users. It is also important that all actions involving a malicious module are executed in memory, which allows file scanners to be bypassed.

As we’ve mentioned, this sample contains NanoCore Client, which can be used to control the victim’s computer, take screenshots, record keystrokes, download files, and much more. It should be noted that the payload here can be anything: from “fashionable” encrypters and miners to advanced Trojans.

Malware writers employ various tricks to conceal malicious activity, and the above technique allowing the execution of malicious code in the context of two legitimate programs is an obvious example. Detecting this kind of concealment method requires a behavioral analysis of the program. Kaspersky Lab’s security solutions detect this behavior as PDM: Trojan.Win32.Generic and PDM: Exploit.Win32.Generic.