A firewall provides security which is additional to that provided by other security solutions and appliances. Additional security is becoming increasingly relevant due to the increase in the number of new malicious programs. Firewalls block undesirable network traffic, both inbound and outbound. Leak tests, which are the subject of this article, evaluate how reliably a firewall controls outbound traffic and protects the computer from data leaks.

What is a firewall?

One function of today’s integrated security systems is enabling the user to control network traffic, i.e. data sent and received over the network by applications that are running on the user’s computer. A component that offers such control is called a firewall. There are software and hardware firewalls (http://en.wikipedia.org/wiki/Personal_firewall). This article only examines software firewalls. 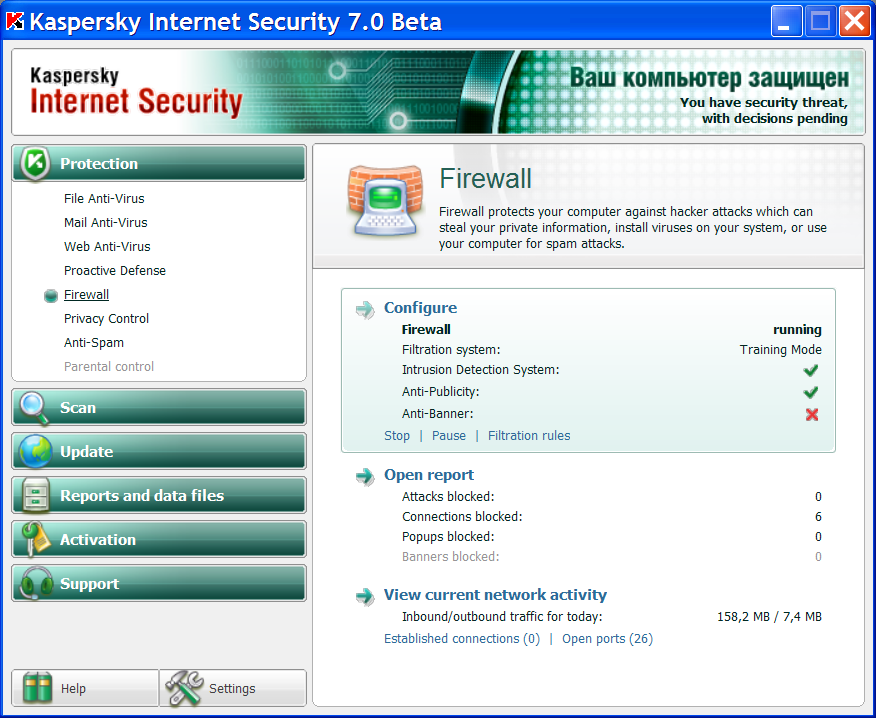 In order to perform their main function, i.e. control network activity, firewalls use lists of rules that define allowed or forbidden network activity for different applications. A rule can include a number of parameters, such as the direction of data transfer, data transfer protocol (IP, TCP, UDP, ICMP etc.), IP addresses and ports for local and remote computers that exchange data.

Any single rule for controlling network activity can apply to all applications in the system. In such cases case, it will be called a packet rule. 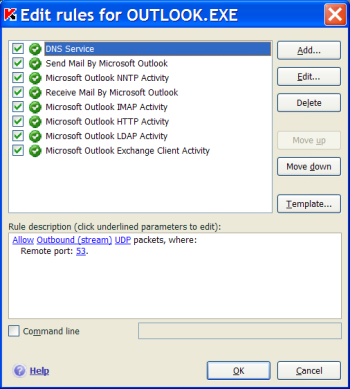 The basic operating mode for a firewall is interactive mode, which is also called training mode. In this mode, whenever the firewall detects network activity that is not covered by any of the previously defined rules, it displays a dialog window which prompts the user either to allow or block the activity on a one-off basis, or to create a rule for this type of network activity. 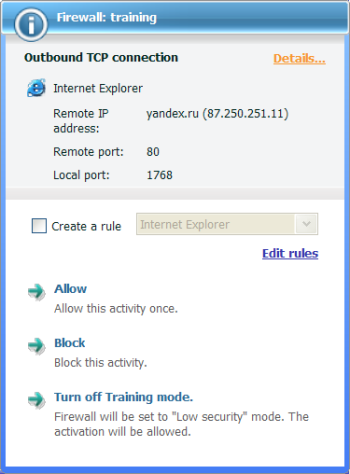 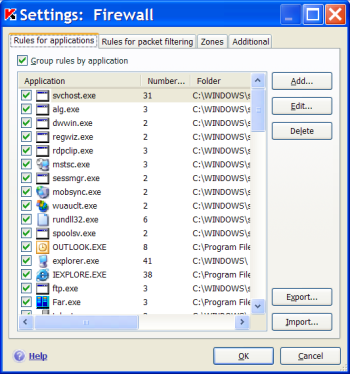 The diagram below shows how a firewall monitors outbound data and protects against data leakage: 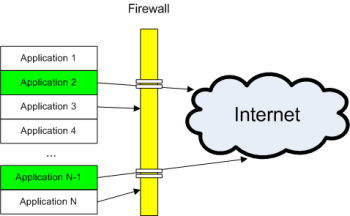 Figure 5. How a firewall functions

A firewall establishes a ‘wall’ that separates applications on the user’s computer from other computers on the local network and on the Internet. For known (trusted) applications (shown in green on Figure 5), there are permission rules (‘holes’ in the ‘wall’) that allow these applications to transmit data to the outside world through the firewall. When any other application attempts to engage in network activity, this activity will be blocked (‘hit the wall’) and the application will not be able to transmit data to the outside world (or receive data from beyond the firewall). However, at any time the user can create new permission rules (make new ‘holes’ in the ‘wall’) to enable the application to exchange data over the network.

It should be noted that some firewalls also include an intrusion protection component, which provides protection from network attacks. This component scans inbound and outbound network traffic for network packets that match known network attack templates contained in a database. A future article will examine such components in detail.

Firewalls provide an additional layer of protection, which can help block malicious programs that are not detected by the antivirus component of an integrated security system. A malicious program may not be detected if it has not yet been added to the antivirus database (so it can’t be detected by traditional signature-based methods) and if the program does not exhibit clearly malicious or even suspicious behavior (so the behavior analysis component will not detect it, either).

Network worms distribute copies of themselves via local networks/ the Internet.

Trojans, which currently make up 91.4% of all malicious programs, also exchange data via networks. Trojan programs include:

It should be noted that firewalls cannot be used to combat classic viruses. This is because, unlike worms, viruses do not use network resources to penetrate other computers and, unlike Trojans, viruses do not need to send data or receive commands.

A firewall is a security system that is difficult to bypass. In order to circumvent antivirus and behavior blocker protection, the authors of malicious programs test their creations and modify them until both protection components fail to detect the malicious code. It is very difficult to bypass a firewall using this method. If a program generates some kind of network activity, it is very hard to hide this activity from the firewall. The only way of doing this is by using leaks.

What are leaks and leak tests?

Leaks are a technology for bypassing a firewall’s network activity control mechanisms, which enables applications that do not have permission rules in the firewall’s rule list to send data to recipients outside the network. The firewall does not prevent this data from being sent and does not inform the user of this network activity in training mode.

Various open port scanners (e.g., ShieldsUP! http://www.grc.com/default.htm, Quick test http://www.pcflank.com/test.htm etc.) are used to test the quality of protection against penetration from outside which the firewall provides.

In order to analyze how well a firewall protects against data leaks, leak tests are used. These are small non-malicious programs that implement one or more leaks. Such programs are mostly developed by security researchers and experts.

Clearly, the only way to set up a leak is to use existing ‘holes’ (i.e. permission rules) for known applications. However, this requires ‘persuading’ the firewall that the network activity has been initiated by a trusted application. There are a number of methods that can be used to achieve this. Before discussing these methods, let’s look at the basic principles of application execution in today’s operating systems. 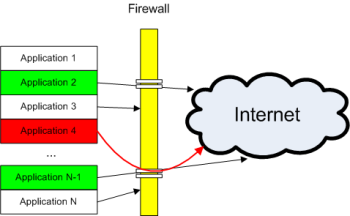 Figure 6. How a leak works

Executable files contain sets of processor instructions, and when an executable file is launched, a new process appears in the system. A process can also be created programmatically by another process. The operating system maintains a process tree in RAM.

It should be noted that the address space of most processes in the system includes not only the code of the application’s executable file, but also the code of numerous dynamic-link libraries (DLL). Such libraries are used to store certain shared functions that are used by several applications. This allows developers to avoid duplicating the same program code in different executable files. The same library can be loaded in the address space of different processes. 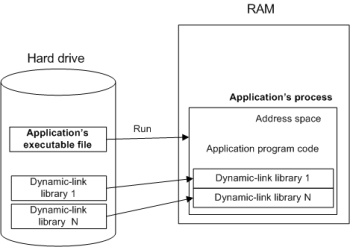 This section examines the technologies that a malicious application can use to ‘fool’ a firewall. Figure 8 illustrates the basic idea, with processes of trusted applications in RAM that are known to the firewall, as well as the process of an unknown (malicious) application.

Figure 8. Setting up a leak

An attempt by the unknown application to initiate network activity on its own behalf will be blocked by the firewall or cause the firewall to display a dialog window asking the user what action should be taken.

There are 3 main approaches to bypassing firewall protection:

There are six leak technologies that implement the three approaches described above:

More detailed descriptions of these technologies and their possible implementations are given below.

There are three substitution methods:

The diagram below illustrates the first type of substitution:

Figure 9. Substituting a trusted process file on the hard drive

Launching a trusted application with command line parameters. This method is based on the fact that most browsers accept the address of the web page to be opened as a command line parameter. If the web page includes a server side script (e.g. cgi), the address line can also include parameters that will be used by the script as input. These parameters can include confidential information, e.g. data stolen by a spyware program. Importantly, all network activity is generated by the browser as usual, so it will always be allowed in accordance with the firewall rules.

To prevent the user from noticing the browser window, the browser is usually launched in hidden mode (Ghost, TooLeaky, Wallbreaker [1]).

Malicious code can also launch the browser using other processes rather than launching it directly. For example:

This method is illustrated below:

It should be noted that both methods are documented and do have legitimate uses.

This method is illustrated below:

Figure 11. Injecting a dynamic link library into a trusted process

There are numerous methods for injecting code into other applications’ processes. A number of examples are given below:

The processes most often attacked are those of Internet browsers (Internet Explorer etc. – AWFT [1,2,4], CopyCat and Thermite tests), the operating system shell (explorer.exe – AWFT [3,4], CPIL and CPILSuite [1]) and the svchost.exe process, which is the main process for Windows services loaded from dynamic link libraries (the DNStest test).

This method is shown in the diagram below:

Using program interfaces to control an Internet browser. This method exploits various mechanisms in Windows designed to facilitate interaction between the processes of different components / applications. These mechanisms include: