All statistical data used in this report was collected using the Kaspersky Security Network (KSN), a distributed antivirus network. The data was received from those KSN users who gave their consent to have data anonymously transferred from their computers.

The data was received from computers protected by Kaspersky Lab products that Kaspersky Lab ICS CERT categorizes as part of the industrial infrastructure at organizations. This group includes Windows computers that perform one or several of the following functions:

At first, Shadow Brokers tried to sell their archive. Later, most of it was published. The data that was made public included exploits for network equipment and routers, for banking systems, for UNIX-like systems and for various versions of Windows. Some of the vulnerabilities published were previously unknown zero-day vulnerabilities.

In June 2017, the results of research into the CrashOverride/Industroyer malware were published. Experts from ESET and Dragos Inc., as well as a number of independent researchers, came to the conclusion that the malware was designed to disrupt the operation of industrial control systems (ICS), particularly electrical substations. CrashOverride/Industroyer is capable of directly controlling switches and circuit breakers in electrical substation circuits.

Kaspersky Lab ICS CERT experts reported on Business Email Compromise (BEC) attacks carried out by Nigerian threat actors that were primarily targeting industrial and large transportation and logistics companies. In the attacks analyzed by Kaspersky Lab, industrial companies account for over 80% of potential victims. All in all, over 500 attacked companies were discovered in more than 50 countries.

An important development in the first six months of 2017 was the leak of an archive from a special unit of the US Central Intelligence Agency. The archive included information on CIA hacking tools: malware, including zero-day exploits, malicious remote access tools and related documentation. Part of the archive was published on WikiLeaks.

Ransomware has become a significant threat for companies, including industrial enterprises. It is particularly dangerous for enterprises that have critical infrastructure facilities, since malware activity can disrupt industrial processes.

During the first six months of 2017, attacks by encryption ransomware belonging to 33 different families were blocked on ICS computers. Fortunately, we did not find any dedicated programs designed specifically to block industrial automation software among the malware samples detected.

Based on the number of machines attacked, WannaCry ranked highest in the first half of 2017 – it accounted for 13.4% of all computers in industrial infrastructure attacked by encryption ransomware. 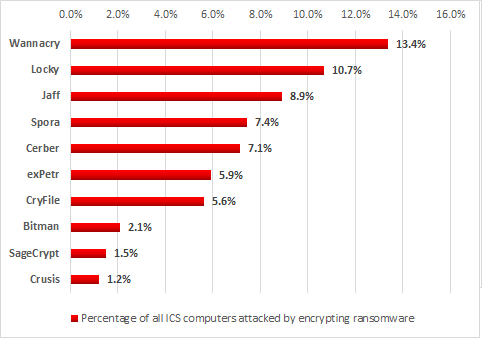 WannaCry infections were possible because of typical industrial network configuration errors. We analyzed all infection pathways and came to the conclusion that in most cases industrial automation systems had been attacked by WannaCry malware from the local corporate network and through VPN connections.

In the first half of 2017, Kaspersky Lab products blocked attack attempts on 37.6% of ICS computers protected by them globally, which is 1.6 percentage points less than in the second half of 2016.

While the proportion of machines attacked grew from one month to the next in the second half of 2016, the dynamics were somewhat different in the first six months of 2017. We saw attacker activity fall in January, then the proportion of computers attacked rose back to its former level in February and March and then it gradually declined again from April to June. 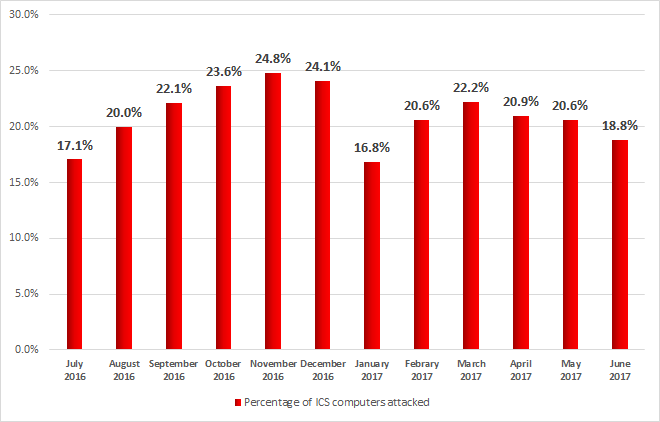 About 18,000 different modifications of malware belonging to more than 2,500 different families were detected on industrial automation systems in the first half of 2017.

In the first half of 2017, attempts to download malware from the Internet or access known malicious or phishing web resources were blocked on 20.4% of ICS computers. 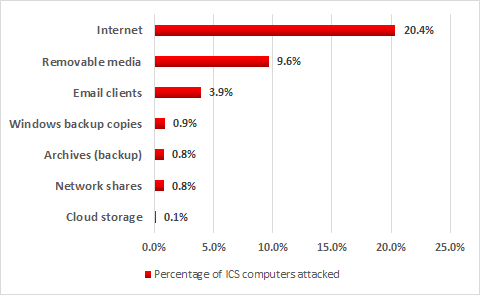 Malware in the form of Windows (Win32/Win 64) executable files was blocked on more than 50% of all computers attacked. Instead of developing an executable file, threat actors often implement malicious functionality using a script language, which is executed by interpreters that are already installed on the computer of a would-be victim. A ranking of the main platforms used by malware apart from Windows is provided below. 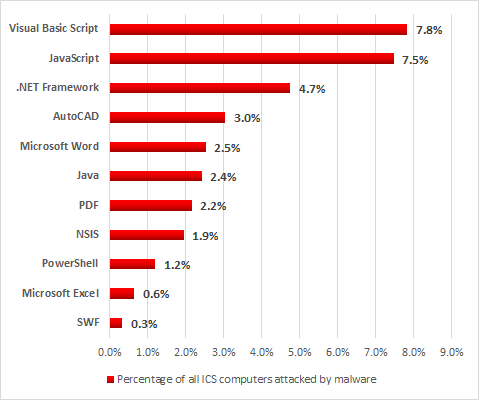 Note that attackers often use small loaders written in JavaScript, Visual Basic Script or Powershell, which are launched using command-line parameters for the relevant interpreters.