A family of ransomware Trojans that encrypts files and adds the extensions “.xtbl” and “.ytbl” emerged in late 2014/early 2015, and quickly established itself among the top three most widespread encryptors in Russia (along with Trojan-Ransom.Win32.Cryakl and Trojan-Ransom.BAT.Scatter). This threat has been assigned the verdict Trojan-Ransom.Win32.Shade according to Kaspersky Lab’s classification. The original name given to the encryptor by its creator is not known; other security vendors detect it as Trojan.Encoder.858, Ransom:Win32/Troldesh.

There has been no appreciable evolution of this Trojan over time – only the format of the encrypted file’s name, the C&C server addresses and the RSA keys have been changing.

There are two main methods used to deliver the malware to victims’ computers: spam messages and exploit kits (in particular, NuclearEK).

When delivered via spam, the user receives a letter with a malicious file attached. The system is infected when the user attempts to open the attachment. The following file names have been used when spreading Trojan-Ransom.Win32.Shade:

It should be noted that the file name changes for each mass mailing campaign, so the potential file names are not limited to those listed above.

The second delivery mechanism – via exploit kit – is more dangerous because the infection occurs when the victim unwittingly visits a compromised website. It may be a site belonging to cybercriminals, or a legitimate resource that has been hacked. In most cases, the user is completely unaware of the danger the website poses. Malicious code on the website exploits a vulnerability in the browser or a plugin, and the Trojan is then covertly installed in the system. Unlike the spam delivery method, the victim doesn’t even have to run an executable file.

After Trojan-Ransom.Win32.Shade ends up in the system, it connects to a C&C server located in the Tor network, reports the infection and requests a public RSA-3072 key that is subsequently used to encrypt files (as discussed below). Should the connection attempt fail, the Trojan chooses one of the 100 public keys that are stored within its body for just such an eventuality.

The Trojan then starts encrypting files. While scanning for objects to encrypt, it uses the static list of extensions shown in the screenshot below.

When encryption is complete, a menacing image is set as the desktop background: 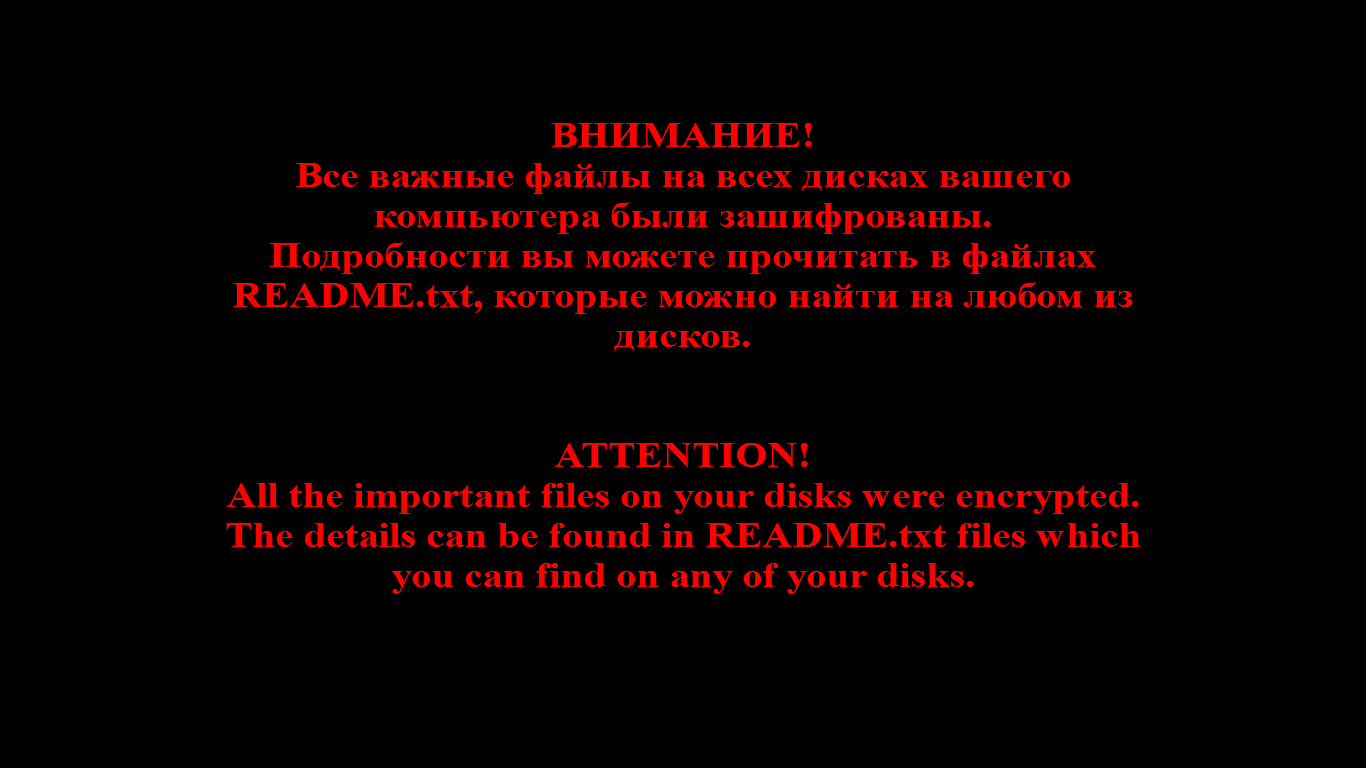 The Trojan leaves ransom demands in the files README1.txt, …, README10.txt. The contents of these files are always the same:

However, unlike most other encryptors, Trojan-Ransom.Win32.Shade doesn’t stop there. It doesn’t terminate its process, but instead starts an infinite loop in which it requests a list from the C&C server containing the URLs of additional malware. It then downloads that malware and installs it in the system. This sort of activity is typical of download bots. We have spotted malware from the following families being downloaded:

Below is the code for the download and listening loop:

It is therefore very important to run a complete anti-malware scan of the computer if the Shade encryptor (or the .xtbl, .ytbl files it creates) is detected. If left untreated, the system will most probably remain infected with several malicious programs downloaded by the encryptor.

In C syntax, this stricture can be written as follows:

The Trojan attempts to rename the encrypted file using the result of the calculation Base64(AES_encrypt(original file name)).xtbl (e.g. ArSxrr+acw970LFQw.xtbl). Failing this, it simply adds the extension .ytbl to the original file name. In later versions, the Trojan adds the infected computer’s ID and then the extension .xtbl to the file name, e.g. ArSxrr+acw970LFQw.043C17E72A1E91C6AE29.xtbl.

Communication with a C&C server

The address of one C&C server is contained in the Trojan’s body. The servers are located in the Tor network and communication is established using a Tor client that is statically linked to the Trojan.

Propagation of the encryptor

The code that the user is prompted to email to the cybercriminals can have the form ID|0 if the public code was received from the C&C server, or ID|key_number|build|version if one of the public RSA keys hardcoded in the Trojan’s body was selected, with the corresponding number used for the value key_number. ID is the identity of the infected computer, build and version are numeric values that denote respectively the ID of the specific Trojan sample and the encryptor’s version.

We observed the propagation of different samples from the encryptor’s two versions. For each specific sample of the same version of the Trojan there existed a unique combination of ‘build’ (ID of the specific sample) and the email address (for communication with the cybercriminals).

Although we found no partnership notices, based on the data we can assume the Trojan is distributed, and the ransom collected, via a partnership network. Possibly, the malware sample IDs (the ‘build‘ value) and the different email addresses are associated with various partners responsible for distributing this malicious program.

Most of the Trojan infections occur in Russia, Ukraine and Germany. According to KSN data, the distribution of Trojan-Ransom.Win32.Shade is as follows. 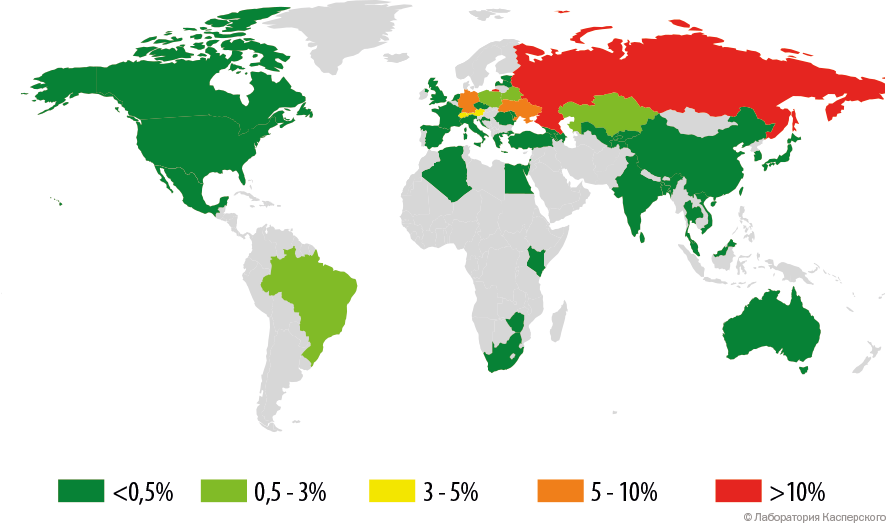 Among the malicious programs downloaded by Trojan-Ransom.Win32.Shade is a trojan used for brute forcing website passwords. The internal organization of the brute forcer is very similar to that of the encryptor Trojan itself – it was most probably created by the same team of cybercriminals. This downloaded brute forcer Trojan has been assigned the verdict Trojan.Win32.CMSBrute.

Common features of the CMSBrute family

Communication with the C&C server

Each sample of Trojan.Win32.CMSBrute contains the address of one C&C server. The servers are located in the Tor network and communication with them is established using the Tor client that is statically linked to the Trojan.

In the case of Trojan-Ransom.Win32.Shade, all advice that was previously given on how to counteract encryptors is still relevant. Detailed instructions are available at:

If your computer has already suffered an attack by this Trojan, it is extremely important that you run a full scan and treat it with an anti-malware solution. Remember that Trojan-Ransom.Win32.Shade downloads and installs malware belonging to several various families, as stated at the beginning of this article.

The following samples were used while writing this article:

The Shade Encryptor: a Double Threat