Following on from our earlier Owowa discovery, we continued to hunt for more backdoors potentially set up as malicious modules within IIS, a popular web server edited by Microsoft. And we didn’t come back empty-handed…

In 2021, we noticed a trend among several threat actors for deploying a backdoor within IIS after exploiting one of the ProxyLogon-type vulnerabilities within Microsoft Exchange servers. Dropping an IIS module as a backdoor enables threat actors to maintain persistent, update-resistant and relatively stealthy access to the IT infrastructure of a targeted organization; be it to collect emails, update further malicious access, or clandestinely manage compromised servers that can be leveraged as malicious infrastructure.

In early 2022, we investigated one such IIS backdoor: SessionManager. In late April 2022, most of the samples we identified were still not flagged as malicious in a popular online file scanning service, and SessionManager was still deployed in over 20 organizations.

SessionManager has been used against NGOs, government, military and industrial organizations in Africa, South America, Asia, Europe, Russia and the Middle East, starting from at least March 2021. Because of the similar victims, and use of a common OwlProxy variant, we believe the malicious IIS module may have been leveraged by the GELSEMIUM threat actor, as part of espionage operations.

SessionManager: there’s yet another unwanted module in your web server

Developed in C++, SessionManager is a malicious native-code IIS module whose aim is to be loaded by some IIS applications, to process legitimate HTTP requests that are continuously sent to the server.

Such malicious modules usually expect seemingly legitimate but specifically crafted HTTP requests from their operators, trigger actions based on the operators’ hidden instructions if any, then transparently pass the request to the server for it to be processed just like any other request (see Figure 1).

As a result, such modules are not easily spotted by usual monitoring practices: they do not necessarily initiate suspicious communications to external servers, receive commands through HTTP requests to a server that is specifically exposed to such processes, and their files are often placed in overlooked locations that contain a lot of other legitimate files. 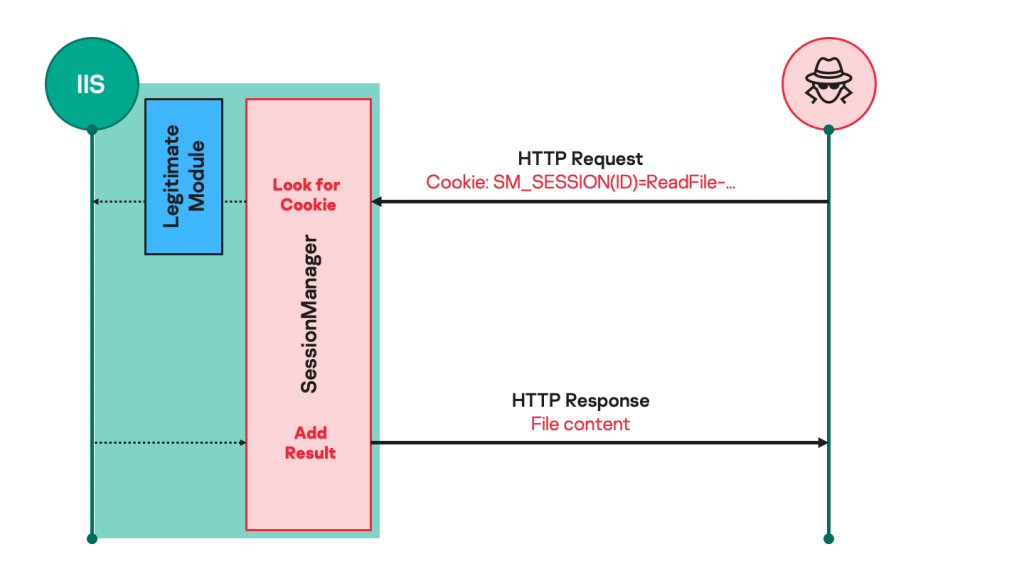 SessionManager offers the following capabilities that, when combined, make it a lightweight persistent initial access backdoor:

We identified several variants of the SessionManager module, all including remains of their development environment (PDB paths) and compilation dates that are consistent with observed activity timeframes. This demonstrates a continuous effort to update the backdoor:

SessionManager hooks itself in the HTTP communications processing of the web server by checking HTTP data just before IIS answers to an HTTP request (see Figure 2). In this specific step of HTTP processing, SessionManager can check the whole content of the HTTP request from a client (an operator), and modify the answer that is sent to the client by the server (to include results from backdoor activities), as previously shown in Figure 1.

Figure 2. SessionManager registration within the web server upon loading

Commands are passed from an operator to SessionManager using a specific HTTP cookie name. The answer from the backdoor to an operator will usually be inserted in the body of the server HTTP response. If the expected cookie name and value format are not found in an HTTP request from a client, the backdoor will do nothing, and processing will continue as if the malicious module did not exist.

The specific HTTP cookie name that is checked by SessionManager is “SM_SESSIONID” in variants before V2 (excluded), and “SM_SESSION” after. Formatting the exact command names and arguments also depends on the backdoor variant:

The results of executed commands are returned as body data within HTTP responses. Before V2 (excluded), SessionManager did not encrypt or obfuscate command and control data. Starting with V2 (included), an additional “SM_KEY” cookie can be included in HTTP requests from operators: if so, its value will be used as an XOR key to encode results that are sent by SessionManager.

The comprehensive list of commands for the most recent variant of SessionManager is presented below:

Once deployed, SessionManager is leveraged by operators to further profile the targeted environment, gather in-memory passwords and deploy additional tools. Notably, operators used Powershell WebClient functionality from a SessionManager remote execution command to download from the server IP address 202.182.123[.]185, between March and April 2021, such as:

Additional tools that operators attempted to download and execute from SessionManager include a PowerSploit-based reflective loader for the Mimikatz DLL, Mimikatz SSP, ProcDump, as well as a legitimate memory dump tool from Avast (MD5 36F2F67A21745438A1CC430F2951DFBC). The latter has been abused by SessionManager operators to attempt to read the memory of the LSASS process, which would enable authentication secrets collection on the compromised server. Operators also tried to leverage the Windows built-in Minidump capability to do the same thing.

And as a result, command execution attempts through this tool were made as follows:

In one case in December 2021, SessionManager operators attempted to execute an additional tool that we unfortunately could not retrieve. This tool was set up to communicate with the IP address 207.148.109[.]111, which is most likely part of the operators’ infrastructure.

Additionally, we managed to identify an earlier target of the same campaign that was not compromised with SessionManager, in Laos in mid-March 2021 (see Attribution).

First, we identified an additional malicious binary (MD5 5F15B17FA0E88D40D4E426E53CF94549, compilation date set in April 2020) that shares a common PDB path part with SessionManager samples (“C:\Users\GodLike\Desktop\t\”). This binary is a password stealer designed to grab Windows users’ passwords when they are changed. It is compiled from a Chinese-documented public source code called Hook-PasswordChangeNotify. Unfortunately, we could not retrieve any additional details about this binary exploitation, but it may have been developed by the same developer as SessionManager.

Then in mid-March 2021, shortly before our first SessionManager detection, we noticed that a threat actor leveraged ProxyLogon-type vulnerabilities against an Exchange Server in Laos to deploy a web shell and conduct malicious activities using the same Mimikatz SSP and Avast memory dump tools that we described above (see Post-deployment activities from SessionManager operators). Not only were the tool samples the same, but one of them was downloaded from the staging server that SessionManager operators leveraged (202.182.123[.]185). As a result, we believe with medium to high confidence that those malicious activities were conducted by the same threat actor behind SessionManager.

Interestingly, the threat actor attempted to download and execute two samples of an HTTP server-type backdoor called OwlProxy on the compromised server in Laos. We then discovered that at least one of those OwlProxy samples had also been downloaded from 202.182.123[.]185 on at least two SessionManager-compromised servers in late March 2021. As a result, we believe with medium to high confidence that the threat actor who operates SessionManager also used or tried to use those OwlProxy samples before introducing SessionManager.

Getting rid of IIS malicious modules

Once again, the activities described here show that the ProxyLogon-type vulnerabilities have been widely used since March 2021 to deploy relatively simple yet very effective persistent server accesses, such as the SessionManager backdoor.

While some of the ProxyLogon exploitation by advanced threat actors was documented right away, notably by Kaspersky, SessionManager was poorly detected for a year. Facing massive and unprecedented server-side vulnerability exploitation, most cybersecurity actors were busy investigating and responding to the first identified offences. As a result, it is still possible to discover related malicious activities months or years later, and that will probably be the case for a long time.

In any case, we cannot stress enough that IIS servers must undergo a complete and dedicated investigation process after the gigantic opportunity that ProxyLogon-style vulnerabilities exposed, starting in 2021. Loaded IIS modules can be listed for a running IIS instance by using the IIS Manager GUI, or from the IIS appcmd command line. If a malicious module is identified, we recommend the following template of actions (merely deleting the malicious module file will not be enough to get rid of it):

It is advised to then proceed with malicious module analysis and incident response activities (from the memory snapshot and backups that have been prepared), in order to understand how the identified malicious tools have been leveraged by their operators.

[1] As per RFC:2109 (title 4.1) and its successor RFC:2965 (title 3.1), values of HTTP cookies that contain characters such as filepath backslashes should be quoted. SessionManager does not care to comply with referenced RFCs, and does not unquote such values, so will fail to process a cookie value that contains filepaths including backslashes as sent by standard HTTP clients.

[2] The previous cookie value limitations (see footnote 1) still exist with V2+. In addition, any cookie variable definition to be processed by SessionManager V2+ must be terminated with a ‘;’ character, even if there is only one cookie variable set.