At the end of the last year the authors of Duqu and Stuxnet tried to eliminate all traces of their activity. They wiped all servers that they used since 2009 or even earlier. The cleanup happened on October 20.

There were virtually no traces of Duqu since then. But several days ago our colleagues in Symantec announced that they found a new “in-the-wild” driver that is very similar to known Duqu drivers. Previous modifications of Duqu drivers were compiled on Nov 3 2010 and Oct 17 2011, and the new driver was compiled on Feb 23 2012.

So, the authors of Duqu are back after a 4 months break.

The newly discovered driver does not contain any new functionality compared to its previous versions. The code contains only minor modifications, and they were most likely done to evade detection from antivirus programs and detection tools such as the CrySyS Duqu Toolkit. Here’s a list of changes compared to older versions:

The fact that the new driver was found in Iran confirms that most of Duqu incidents are related to this country.

According to the information collected from our sources and from our colleagues in Symantec, there are at least 21 incidents related to Duqu.

During the investigation of several incidents we discovered more than one modification of Duqu per incident. We treat each such group of samples as a single case.

Several infected machines did not contain main Duqu modules, but at the same time they contained the files created by these modules, with names starting with “~DQ”, “~DF”, “~DO”. A number of incidents were discovered while analyzing the contents of captured C&C servers. These incidents were also included in our statistics.

Most of the victims of Duqu were located in Iran. 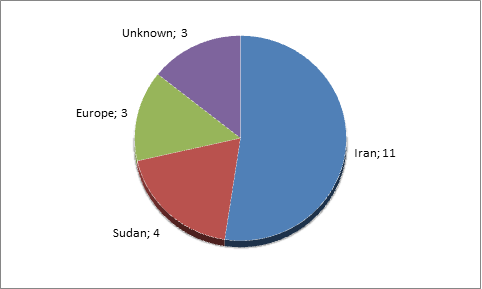 The scope of activities of companies that became victims of Duqu and information targeted by the Trojan indicates that the attackers were looking for any information related to production control systems used in different industries in Iran, and for information about trade relationships of particular organizations.

We have a total of 14 drivers, including one signed driver (cmi4432.sys); there are also 4 missing driver samples.

There are 7 different versions of the main Duqu module (PNF DLL) in our collection. These modules are set up to interact with five 1st tier C&C servers that have been shut down as a result of actions taken by Kaspersky Lab and Symantec. Several 2nd tier C&C servers were shut down, too.

The return of the Duqu Trojan in February 2012 after 4 months of silence indicates that our original assumptions were correct. When you invest as much money as were invested in Duqu and Stuxnet, it’s impossible to simply shutdown the operation. Instead, you do what cybercriminals have learned to do through long experience – change the code to evade detection and carry on as usual.
With a total of less than fifty victims around the world, Duqu remains of the most mysterious Trojans ever spotted in the wild. Its focus on Iran indicates a persistent attacker with a strong, clear agenda. Its complexity and multiple layers of encryption and obfuscation indicate how important it is for the project to remain under the radar. It can be assumed that future developments will focus on this direction.

The mystery of Duqu: Part Ten