The malware detected by Kaspersky Anti-Virus as TDSS is the most sophisticated threat today. TDSS uses a range of methods to evade signature, heuristic, and proactive detection, and uses encryption to facilitate communication between its bots and the botnet command and control center. TDSS also has a powerful rootkit component, which allows it to conceal the presence of any other types of malware in the system.

Its creator calls this program TDL. Since it first appeared in 2008, malware writers have been perfecting their creation little by little. By 2010, the latest version was TDL-3, which was discussed in depth in an article published in August 2010.

The creators of TDSS did not sell their program until the end of 2010. In December, when analyzing a TDSS sample, we discovered something odd: a TDL-3 encrypted disk contained modules of another malicious program, SHIZ.

At that time, a new affiliate program specializing in search engine redirects had just emerged on the Internet; it belonged to the creators of SHIZ, but used TDL-3.

The changes that had been made to the TDL-3 configuration and the emergence of a new affiliate marketing program point to the sale of TDL-3 source code to cybercriminals who had previously been engaged in the development of SHIZ malware.

Why did the creators of TDL decide to sell source code of the third version of their program? The fact is that by this time, TDL-4 had already come out. The cybercriminals most likely considered the changes in version 4 to be significant enough that they wouldn’t have to worry about competition from those who bought TDL-3.

In late 2010, Vyacheslav Rusakov wrote a piece on the latest version of the TDSS rootkit focusing on how it works within the operating system. This article will take a closer look at how TDL-4 communicates with the network and uploads data to the botnet, which numbered over 4.5 million infected computers at the time of writing.

Yet another affiliate program

The way in which the new version of TDL works hasn’t changed so much as how it is spread – via affiliates. As before, affiliate programs offer a TDL distribution client that checks the version of the operating system on a victim machine and then downloads TDL-4 to the computer. 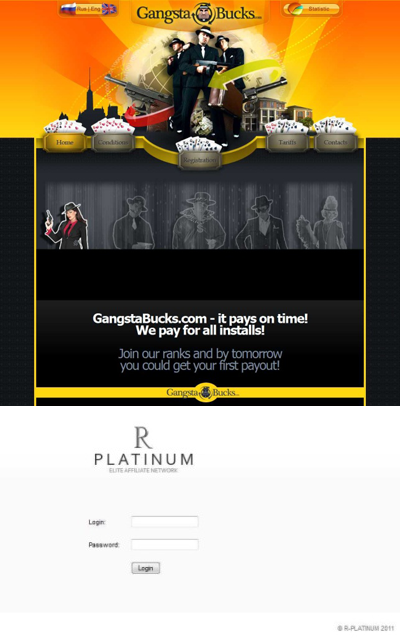 Affiliates receive between $20 to $200 for every 1,000 installations of TDL, depending on the location of the victim computer. Affiliates can use any installation method they choose. Most often, TDL is planted on adult content sites, bootleg websites, and video and file storage services.

The changes in TDL-4 affected practically all components of the malware and its activity on the web to some extent or other. The malware writers extended the program functionality, changed the algorithm used to encrypt the communication protocol between bots and the botnet command and control servers, and attempted to ensure they had access to infected computers even in cases where the botnet control centers are shut down. The owners of TDL are essentially trying to create an ‘indestructible’ botnet that is protected against attacks, competitors, and antivirus companies.

One of the key changes in TDL-4 compared to previous versions is an updated algorithm encrypting the protocol used for communication between infected computers and botnet command and control servers. The cybercriminals replaced RC4 with their own encryption algorithm using XOR swaps and operations. The domain names to which connections are made and the bsh parameter from the cfg.ini file are used as encryption keys.

Readers may recall that one of the distinguishing features of malware from the TDSS family is a configuration file containing descriptions of the key parameters used by various modules to maintain activity logs and communications with command and control servers. 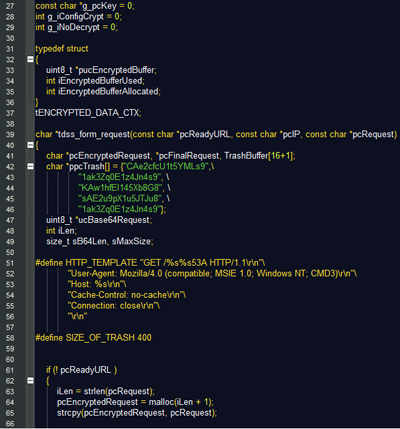 Part of the code modified to work with the TDL-4 protocol.

Upon protocol initialization, a swap table is created for the bot’s outgoing HTTP requests. This table is activated with two keys: the domain name of the botnet command and control server, and the bsh parameter. The source request is encrypted and then converted to base64. Random strings in base64 are prepended and appended to the received message. Once ready, the request is sent to the server using HTTPS.

The new protocol encryption algorithm for communications between the botnet control center and infected machines ensures that the botnet will run smoothly, while protecting infected computers from network traffic analysis, and blocking attempts of other cybercriminals to take control of the botnet.

An antivirus of its own

Just like Sinowal, TDL-4 is a bootkit, which means that it infects the MBR in order to launch itself, thus ensuring that malicious code will run prior to operating system start. This is a classic method used by downloaders which ensures a longer malware lifecycle and makes it less visible to most security programs.

TDL nimbly hides both itself and the malicious programs that it downloads from antivirus products. To prevent other malicious programs not associated with TDL from attracting the attention of users of the infected machine, TDL-4 can now delete them. Not all of them, of course, just the most common. 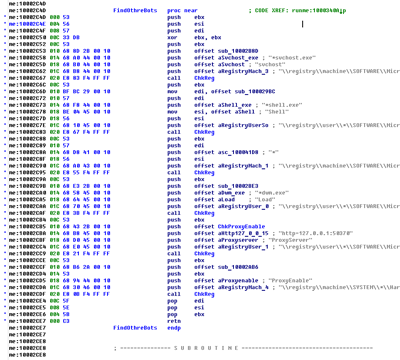 TDSS contains code to remove approximately 20 malicious programs, including Gbot, ZeuS, Clishmic, Optima, etc. TDSS scans the registry, searches for specific file names, blacklists the addresses of the command and control centers of other botnets and prevents victim machines from contacting them.

This ‘antivirus’ actually helps TDSS; on the one hand, it fights cybercrime competition, while on the other hand it protects TDSS and associated malware against undesirable interactions that could be caused by other malware on the infected machine. 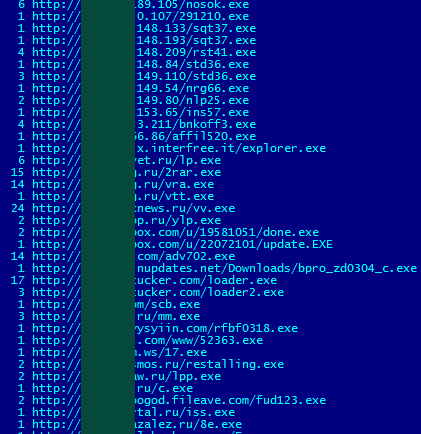 Notably, TDL-4 doesn’t delete itself following installation of other malware, and can at any time use the r.dll module to delete malware it has downloaded.

One of the most outstanding new features of TDL-4 is the kad.dll module, which allows the TDSS botnet to access the Kad network. So what do the cybercriminals want with a publicly accessible file exchange network?

We have known about botnets controlled via P2P for some time now, although until now, these were closed protocol connections created by the cybercriminals themselves. In contrast, TDSS uses a public P2P network in order to transmit commands to all infected computers in the botnet. The initial steps of how TDSS makes use of Kad are given below:

Below is a list of commands from an encrypted ktzerules file.

The most interesting command is Knock. This command allows the cybercriminals to create their own Kad P2P, the clients of which are exclusively TDSS-infected computers.

Essentially, the TDSS botnet kad.dll module is more or less the same as cmd.dll in terms of control function. By running nodes.dat files containing a list of IP addresses of Kad clients in addition to ktzerlrules, which contains a command to download a new nodes.dat file from cybercriminal servers, the owners of the botnet can both include their infected computers in the publicly accessible Kad network and remove them from the network. The publicly accessible Kad network contains no more than 10 TDSS infected computers. This makes replacing the ktzerules file as inefficient as possible, which prevents other cybercriminals from taking control over the botnet. The total number of TDSS infected computers on the closed network number tens of thousands.

Kad.dll code responsible for sending commands from the TDL-4 cybercriminals

Furthermore, access to Kad makes it possible for the cybercriminals to download any files to botnet machines and make them accessible to the P2P users. This includes adult content files and stolen data bases.

The key threat that such a botnet poses is that even when its command and control centers are shut down, the botnet owners will not lose control over infected machines. However, the system does face two major obstacles:

In addition to its known adware function, TDL-4 has added some new modules to its arsenal. This article has already touched on the ‘antivirus’ function and the P2P module. The owners of TDSS have also added several other modules to their malware, and now offer services such as anonymous network access via infected machines and 64-bit support.

A file called Socks.dll has been added to TDSS’s svchost.exe; it is used to establish a proxy server on an infected computer. This module facilitates the anonymous viewing of Internet resources via infected machines. 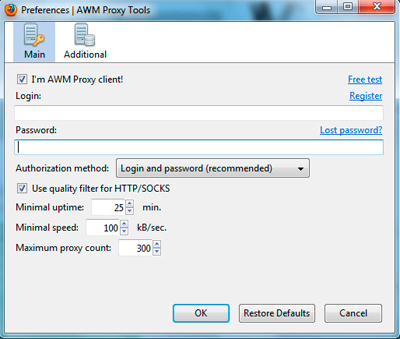 Firefox add-on for anonymous Internet use via the TDSS botnet

The appearance of a 64-bit malicious driver in TDSS was another innovation in malware in 2010. In order to support operations with 64-bit systems in user mode, TDL-4 contains a module called cmd64.dll, a version of cmd.dll for 64-bit systems. However, due to the limitations of working with 64-bit programs, cmd64.dll code only provides communication with the botnet command and control servers. 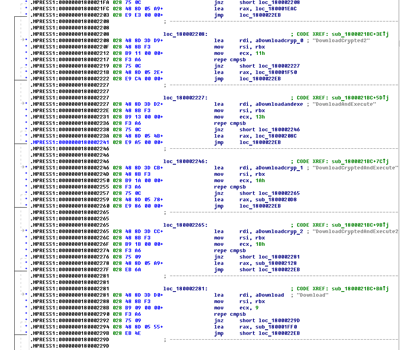 The cmd.dll module (see for details) remains almost completely unchanged. This module facilitates communication with the botnet command and control servers and substitutes search results, i.e. fraudulently manipulates advertising systems and search engines. The newest innovation in the list of commands for TDSS is the SetName command, which assigns a number to each infected computer. For search engines and banner networks, TDSS uses the same fake click and traffic technologies as similar malicious programs. However, TDSS has the longest list of search engines for which it substitutes search results.

Despite the steps taken by cybercriminals to protect the command and control centers, knowing the protocol TDL-4 uses to communicate with servers makes it possible to create specially crafted requests and obtain statistics on the number of infected computers. Kaspersky Lab’s analysis of the data identified three different MySQL databases located in Moldova, Lithuania, and the USA, all of which supported used proxy servers to support the botnet.

According to these databases, in just the first three months of 2011 alone, TDL-4 infected 4,524,488 computers around the world. 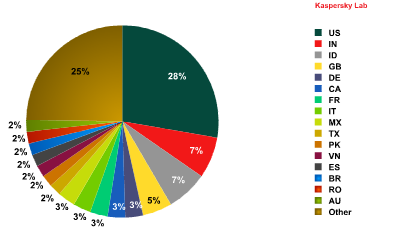 Nearly one-third of all infected computers are in the United States. Going on the prices quoted by affiliate programs, this number of infected computers in the US is worth $250,000, a sum which presumably made its way to the creators of TDSS. Remarkably, there are no Russian users in the statistics. This may be explained by the fact that affiliate marketing programs do not offer payment for infecting computers located in Russia.

This heading of this last section has become traditional in our articles on TDSS. In this case, we have reason to believe that TDSS will continue to evolve. The fact that TDL-4 code shows active development — a rootkit for 64-bit systems, the malware running prior to operating system start launches, the use of exploits from Stuxnet’s arsenal, P2P technology, its own ‘antivirus’ and a lot more — place TDSS firmly in the ranks of the most technologically sophisticated, and most complex to analyze, malware. The botnet, with more than 4.5 million infected computers, is used by cybercriminals to manipulate adware and search engines, provide anonymous Internet access, and acts as a launch pad for other malware.

TDSS and the botnet that unites all the computers it infects will continue to cause problems for users and IT security professionals alike. The decentralized, server-less botnet is practically indestructible, as the Kido epidemic showed.