For those who may have missed the two first blogs, you can read them here and here
However, today we discovered than some of the payloads were not the usual Trojan-Downloader.Win32.CodecPack.*.

Instead, the payload is now Ransomware (detected as Trojan-Ransom.Win32.PornoBlocker.jtg), disguising itself as a fake warning message from the German Federal Police. The message pretends that your computer has been blocked because it was found to be hosting child pornography.

Victims are asked to pay a 100 euros fine to unlock the machine.

As if the German police logo wasn’t enough, they also use logo from anti-virus companies such as Kaspersky Lab to look more convincing.

On successful exploitation, the malware hijacks the desktop to display the following warning: 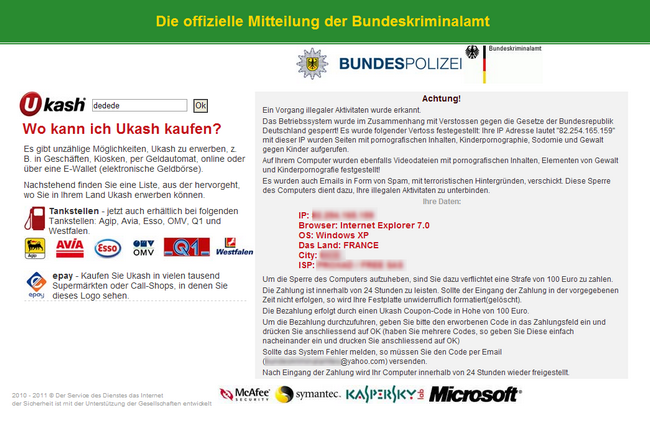 The victim can no longer use their computer, unless they pay a 100 euros ransom. Here is a translation of the blackmail test:

An operation of illegal activities has been detected.

Federal Republic of Germany! Following violation was noted: Your IP address is with this IP,

Your computer also has video files with Pornographic content, elements of violence and child pornography!

There were also sent emails in the form of spam, with terrorist backgrounds.

This serves to lock the computer to stop your illegal activities.

To unlock the computer, you are obligated to pay a penalty of 100 Euro.

The payment must be made within 24 hours. If the payment is not made in the allotted time,

your hard disk will be irrevocably formatted (erased).

Payment is made by a Ukash coupon code in the amount of 100 Euro.

In order to be carried out the charge, please enter the purchased code into the payment box and

then press 0K (if you have multiple codes, enter this simply a sequence, then press OK)

Should the system report errors, you must send the code by email (removed).

After receipt of payment your computer within 24 hours re-opened.

The fake Federal German Police page is actually an html page embedded inside the malware executable.

Upon execution, the malicious program creates a new window with the TOPMOST attributes in order to stay above every running window. This window is used to display the content of the html file, through the use of OLE and the WebBrowser control.

A new threat is created in order to kill Task Manager and suspend Windows Explorer.
Just before it actually does that, the malware takes over the default Windows shell inside the registry key (HKEY_LOCAL_MACHINESOFTWAREMicrosoftWindows NTCurrentVersionWinlogon) and replaces explorer.exe.

It then starts an infinite loop and tries to kill the “taskmgr.exe” process if found running, and also suspends “explorer.exe” every 100ms in order to block user interactions: 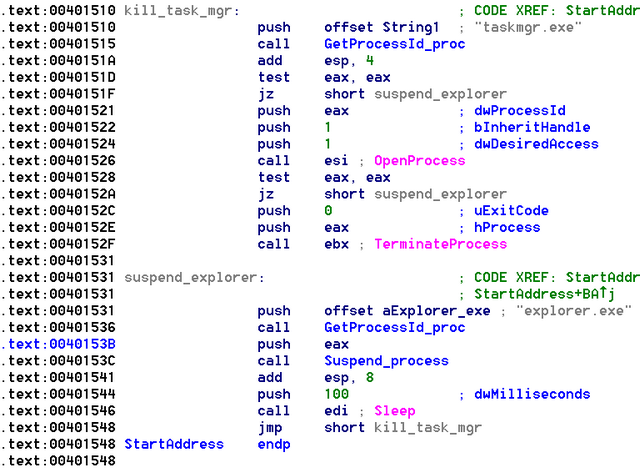 The result is a suspended Windows Explorer, no way to run the Task Manager, and the topmost window displaying a web page.
Inside this html page, there is Javascript – used to send the entered Ukash coupon code to a remote server.

However, at the time of discovery the DNS involved was already disabled, leaving infected users’ computers unusable.

Kaspersky Lab continues to investigate this malware and will update the blog if more important information is discovered.