We’ve been receiving a number of new samples of Trojan-Downloader.Win32.Delf.awg from users. It looks like this program, which will download Email-Worm.Win32.Scano, Trojan-Proxy.Win32.Xorpix and Trojan-PSW.Win32.LdPinch, has been widely spammed.

The bad news is that you always need to be careful, and never open suspicious attachments. The good news is that KAV 6.0 and KIS detect these new modifications of Delf proactively. So even if you haven’t managed to update recently, you’re still protected. 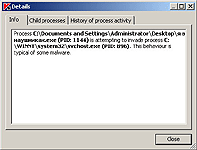