Over the last couple of days there’s been quite a lot of talk about a Trojan + rootkit called Hearse.

Here’s a screenshot of KAV6, which is currently in Release Candidate status, detecting the active Goldun.im components. 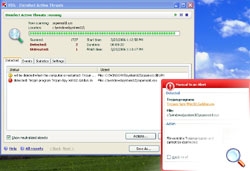 While it has gained considerable media attention, such pieces of malware are quite common and unfortunately part of the everyday malware landscape.

On a related note:

A couple of days ago we came across a Bancos variant, Trojan-Spy.Win32.Bancos.pw, which is able to intercept HTTPS traffic.

The number of Trojans which is able to do this is still low, but there’s no doubt that we are going to see more of these.