Fortunately, the first summer month was relatively uneventful with no major incidents to report and nothing out of the ordinary about cybercriminal activity. In developing countries, attackers took advantage of users’ ignorance of IT security to spread their malware. In developed countries, malware targeting users’ data and money was prevalent. In Brazil, it was ‘bankers’ as usual, while in Russia, as ever, malware was used in a variety of scams.

There has been much talk of cloud services offered by various companies lately. In June, cybercriminals used Amazon’s cloud to host and distribute malware that targeted Brazilian users and was designed to steal data from customers of 9 Brazilian banks. To improve its chances of success, the malware blocks the normal operation of AV programs and special plugins that are supposed to make online banking secure. The malware also steals digital certificates and Microsoft Live Messenger credentials.

As well as the standard fake archives and Trojan Blockers that demand ransoms for unblocking computers, Russian attackers tried to make money out of thin air using the BitCoins virtual money system. All that was required was to take over the resources of a victim machine for some time. Kaspersky Lab experts detected a piece of malware that launched bcm.exe, a legitimate BitCoins file, on the victim computer in an attempt to generate the cyber currency. The file is embedded in the malicious program and is copied to the hard drive after the malware is launched. The BitCoins site administration quickly blocked the attacker’s account, so apparently the cybercriminal did not make much money.

The interest that black hats have shown in Mac OS X has not abated. While rogue antivirus programs for that platform were detected in May, June saw cybercriminals distributing a backdoor – Backdoor.OSX.Olyx.a. This piece of malware is designed to provide attackers with remote control of victim machines, enabling them to use infected computers for their malicious purposes: download other malware, launch programs and send commands to an interpreter for execution.

June brought some notable successes for various law enforcement agencies in the war on cybercrime, with several successful operations resulting from joint efforts. In the US, the criminal activities of two international groups that made money from fake antivirus programs were terminated. According to preliminary estimates, the damage caused by these groups amounts to $74 million. In addition to US agencies, the operation to shut down these groups involved law enforcement agencies from Germany, France, Holland, Sweden, the UK, Romania, Canada, Ukraine, Lithuania, Latvia and Cyprus. About 600 people suspected of implementing online fraud schemes were arrested in several Southeast Asian countries. Participants of the operation also included police units in China, Taiwan, Cambodia, Indonesia, Malaysia and Thailand. In Russia, Pavel Vrublevsky, the owner of ChronoPay, Russia’s major payment processing center, was arrested on charges of organizing a DDoS attack on a competing service. It is worth mentioning another important development in combating cybercrime at the legislative level: in June, the Japanese parliament passed a number of amendments to existing laws, introducing jail terms for creating and distributing malware.

As was the case in the previous month, the Top 20 malicious programs on the Internet in June included a large number of new entries, while the Top 20 threats detected on users’ computers remained virtually unchanged.

The Top 20 malicious programs on the Internet are once again dominated by malware that make use of drive-by attacks: redirectors, script downloaders and exploits. These made up 14 of the 20 places in this rating.

The latter two simply redirect users to a malicious site using an tag and can be described as primitive compared to the other two entries which make use of more sophisticated technology. As well as infecting legitimate .js files they also invoke the download of another JavaScript, albeit only when the cursor moves within the confines of the active window. This technology appears to be used in order to circumvent certain types of ‘sandboxes’ and emulators.

Fragment of script infected by Trojan-Downloader.JS.Agent.gay

The main script data of all these downloaders is stored in HTML tags. The scripts in the first group use the alt parameter of the tag, while the second group uses the

tag. This method also appears to be used to avoid various emulators and sandboxes which don’t fully support JavaScript and HTML. To execute Java exploits these downloaders use the vulnerabilities CVE-2010-4452 and CVE-2010-0886. In order to embed PDF documents and HTML pages iframe is used, while the .exe files are downloaded and run using longstanding holes in Microsoft software – Adodb.Stream and MDAC – which many users, it turns out, still haven’t patched.

Fragment of the Trojan.JS.Redirector.qa malicious downloader

It’s worth noting the appearance in SWF files of the exploit Trojan-Downloader.SWF.Small.dj (20th place). Its functionality consists of the hidden launch of another malicious SWF file from the same server folder.

Two exploits in PDF documents – Exploit.JS.Pdfka.dyi (16th place) and Exploit.JS.Pdfka.duj (17th place) – target a vulnerability (CVE-2010-1885) in tagged image file format (TIFF). To make analysis of PDF files more difficult, the cybercriminals spread the exploit code among several objects. The beginning of the JavaScript is located in one object, the second object contains the end of the script and the main data is in the third object. The code is somewhat obfuscated – all variable names are random and the names of objects and functions are made up as they go along. 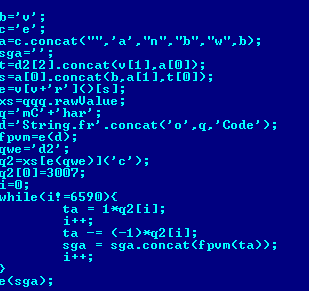 Fragment of the obfuscated Exploit.JS.Pdfka.duj JavaScript

As has already been mentioned above, there were only minor changes to the Top 20 rating of malicious programs on users’ computers. However, along with all the usual suspects in this Top 20 there is a rather unusual specimen – the file virus Virus.Win32.Nimnul.a.

This malicious program first appeared in the Top 20 back in May and in the last two months has risen from 20th to 11th. This is very unusual considering that file infectors are gradually becoming obsolete. Cybercriminals now prefer malware protected by polymorphic packers (in order to ensure the uniqueness of packed malicious programs). It is hardly worth the bother of using file viruses, which are not easy to develop or maintain, and are fairly easy to detect on a system.

The Nimnul.a virus infects executable files by adding a .text section to the end of a file and modifying its entry point. After being launched, an infected file checks for the presence of a unique virus identifier (Mutex) on the OS. The presence of the Mutex object means that another infected file has been launched on the system. In that case, the virus only launches the original application. If Mutex is not found, it will be created and then the main Nimnul component will be dropped onto the disk. This component writes several other malicious libraries to the disk.

The malicious program steals personal configuration files for popular browsers, connects to a remote server and is then capable of substituting web pages.

The virus spreads via removable media using autorun.inf and its own infection files. Interestingly, the virus has been recorded in India, Indonesia, Bangladesh and Vietnam. These were the countries where malware was detected on the highest percentage of Kaspersky Security Network participants: Bangladesh (85.76%), India (65.27%), Indonesia (59.51%) and Vietnam (54.16%). The users in these countries are obviously not careful enough when it comes to IT security and are using unpatched versions of Windows OSs. Microsoft released an update that disables autorun from removable media on 8 February 2011. 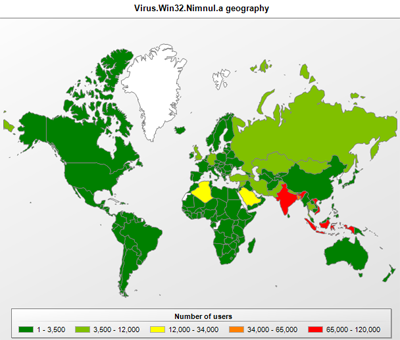