As the IT and OT environment becomes more complex, adversaries are quick to adapt their attack strategy. For example, as users’ work environments diversify, adversaries are busy acquiring the TTPs to infiltrate systems. Recently, we reported to our Threat Intelligence Portal customers a similar malware framework that internally we called MATA. The MATA malware framework possesses several components, such as loader, orchestrator and plugins. This comprehensive framework is able to target Windows, Linux and macOS operating systems.

The first artefacts we found relating to MATA were used around April 2018. After that, the actor behind this advanced malware framework used it aggressively to infiltrate corporate entities around the world. We identified several victims from our telemetry and figured out the purpose of this malware framework.

The Windows version of MATA consists of several components. According to our telemetry, the actor used a loader malware to load the encrypted next-stage payload. We’re not sure that the loaded payload is the orchestrator malware, but almost all victims have the loader and orchestrator on the same machine.

Component of the Windows version of MATA

This loader takes a hardcoded hex-string, converts it to binary and AES-decrypts it in order to obtain the path to the payload file. Each loader has a hard-coded path to load the encrypted payload. The payload file is then AES-decrypted and loaded.

The orchestrator can load 15 plugins at the same time. There are three ways to load them:

The malware authors call their infrastructure MataNet. For covert communication, they employ TLS1.2 connections with the help of the “openssl-1.1.0f” open source library, which is statically linked inside this module. Additionally, the traffic between MataNet nodes is encrypted with a random RC4 session key. MataNet implements both client and server mode. In server mode the certificate file “c_2910.cls” and the private key file “k_3872.cls” are loaded for TLS encryption. However, this mode is never used.

The MataNet client establishes periodic connections with its C2. Every message has a 12-byte-long header, where the first DWORD is the message ID and the rest is the auxiliary data, as described in the table below:

There is an interesting string inside the MATA_Plug_WebProxy plugin – “Proxy-agent: matt-dot-net” – which is a reference to Matt McKnight’s open source project. There are some differences though. Matt’s project is written in C# rather than C++. The MATA proxy is noticeably simpler, as there is no cache and no SSL support, for instance. It’s possible that MATA’s authors found and used the source code of an early version of Matt’s proxy server. It looks like the malware author rewrote the code from C# to C++ but left this footprint unchanged.

The MATA framework targets not only the Windows system but also Linux and macOS systems.

During our research, we also found a package containing different MATA files together with a set of hacking tools. In this case, the package was found on a legitimate distribution site, which might indicate that this is the way the malware was distributed. It included a Windows MATA orchestrator, a Linux tool for listing folders, scripts for exploiting Atlassian Confluence Server (CVE-2019-3396), a legitimate socat tool and a Linux version of the MATA orchestrator bundled together with a set of plugins. China-based security vendor Netlab also published a highly detailed blog on this malware.

The module is designed to run as a daemon. Upon launch, the module checks if it is already running by reading the PID from “/var/run/init.pid” and checks if the “/proc/%pid%/cmdline” file content is equal to “/flash/bin/mountd”. Note that “/flash/bin/mountd” is an unusual path for standard Linux desktop or server installations. This path suggests that MATA’s Linux targets are diskless network devices such as routers, firewalls or IoT devices based on x86_64. The module can be run with the “/pro” switch to skip the “init.pid” check. The AES-encrypted configuration is stored in the “$HOME/.memcache” file. The behavior of this module is the same as the Windows MATA orchestrator previously described. The plugin names of Linux MATA and the corresponding Windows plugins are:

Note that the Linux version of MATA has a logsend plugin. This plugin implements an interesting new feature, a “scan” command that tries to establish a TCP connection on ports 8291 (used for administration of MikroTik RouterOS devices) and 8292 (“Bloomberg Professional” software) and random IP addresses excluding addresses belonging to private networks. Any successful connection is logged and sent to the C2. These logs might be used by attackers for target selection.

We discovered another MATA malware target for macOS uploaded to VirusTotal on April 8, 2020. The malicious Apple Disk Image file is a Trojanized macOS application based on an open-source two-factor authentication application named MinaOTP.

Upon launch, this malicious Mach-o file loads the initial configuration file from “/Library/Caches/com.apple.appstotore.db”.

Like another strain running on a different platform, the macOS MATA malware also runs on a plugin basis. Its plugin list is almost identical to the Linux version, except that it also contains a plugin named “plugin_socks”. The “plugin_socks” plugin is similar to “plugin_reverse_p2p” and is responsible for configuring proxy servers.

Based on our telemetry, we have been able to identify several victims who were infected by the MATA framework. The infection is not restricted to a specific territory. Victims were recorded in Poland, Germany, Turkey, Korea, Japan and India. Moreover, the actor compromised systems in various industries, including a software development company, an e-commerce company and an internet service provider.

We assess that MATA was used by an APT actor, and from one victim we identified one of their intentions. After deploying MATA malware and its plugins, the actor attempted to find the victim’s databases and execute several database queries to acquire customer lists. We’re not sure if they completed the exfiltration of the customer database, but it’s certain that customer databases from victims are one of their interests. In addition, MATA was used to distribute VHD ransomware to one victim, something that will be described in detail in an upcoming blog post. 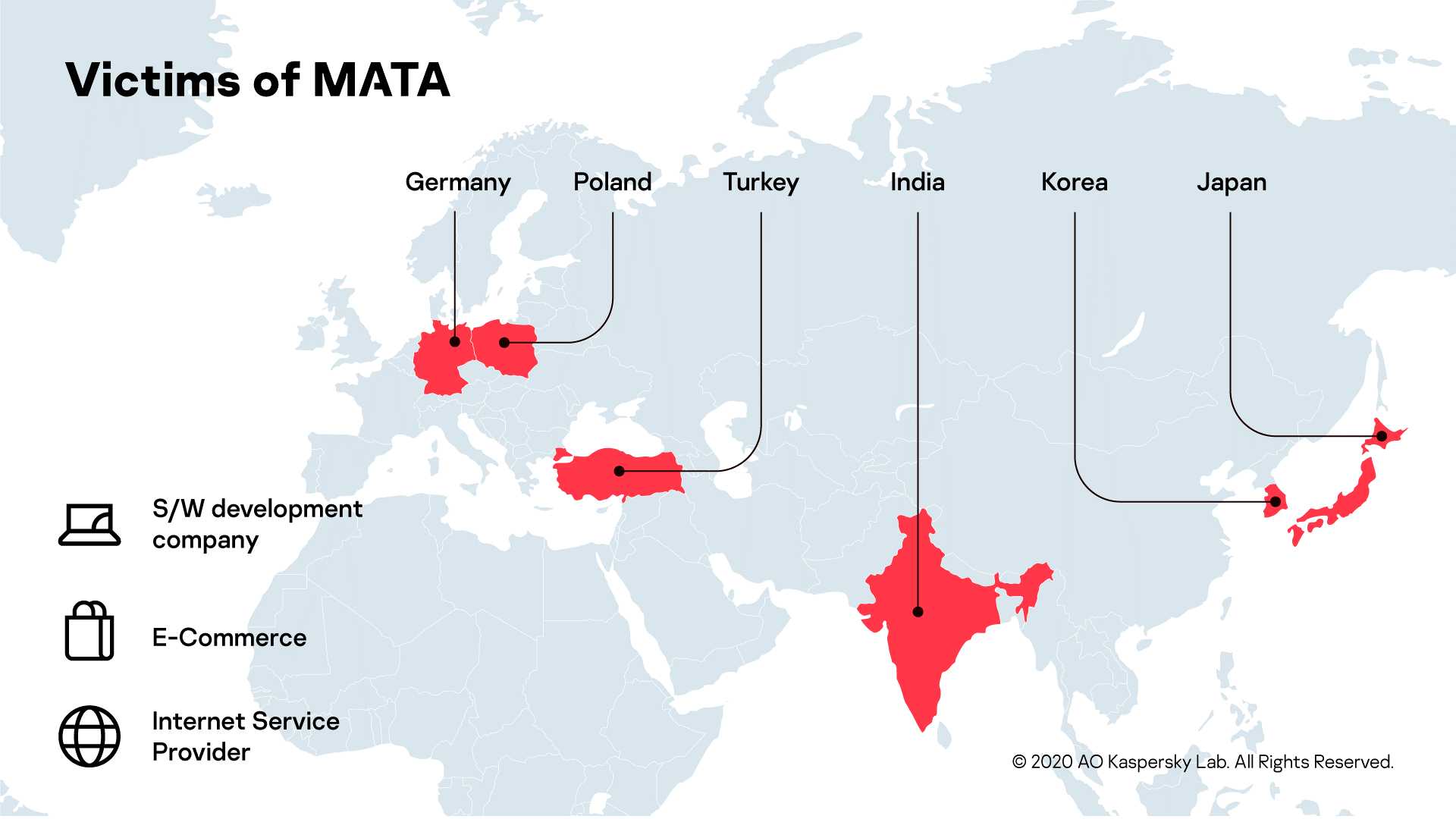 We assess that the MATA framework is linked to the Lazarus APT group. The MATA orchestrator uses two unique filenames, c_2910.cls and k_3872.cls, which have only previously been seen in several Manuscrypt variants, including the samples (0137f688436c468d43b3e50878ec1a1f) mentioned in the US-CERT publication.

Moreover, MATA uses global configuration data including a randomly generated session ID, date-based version information, a sleep interval and multiple C2s and C2 server addresses. We’ve seen that one of the Manuscrypt variants (ab09f6a249ca88d1a036eee7a02cdd16) shares a similar configuration structure with the MATA framework. This old Manuscrypt variant is an active backdoor that has similar configuration data such as session ID, sleep interval, number of C2 addresses, infected date, and C2 addresses. They are not identical, but they have a similar structure.

The MATA framework is significant in that it is able to target multiple platforms: Windows, Linux and macOS. In addition, the actor behind this advanced malware framework utilized it for a type of cybercrime attack that steals customer databases and distributes ransomware. We evaluate that this malware is going to evolve, so we will be monitoring its activity in order to protect our customers.