Since March 2018 we have discovered several infections where a previously unknown Trojan was injected into the lsass.exe system process memory. These implants were injected by the digitally signed 32- and 64-bit network filtering driver NDISProxy. Interestingly, this driver is signed with a digital certificate that belongs to Chinese company LeagSoft, a developer of information security software based in Shenzhen, Guangdong. We informed the company about the issue via CN-CERT.

The campaign described in this report was active immediately prior to Central Asian high-level meeting and we suppose that actor behind still follows regional political agenda.

Which malicious modules are used? 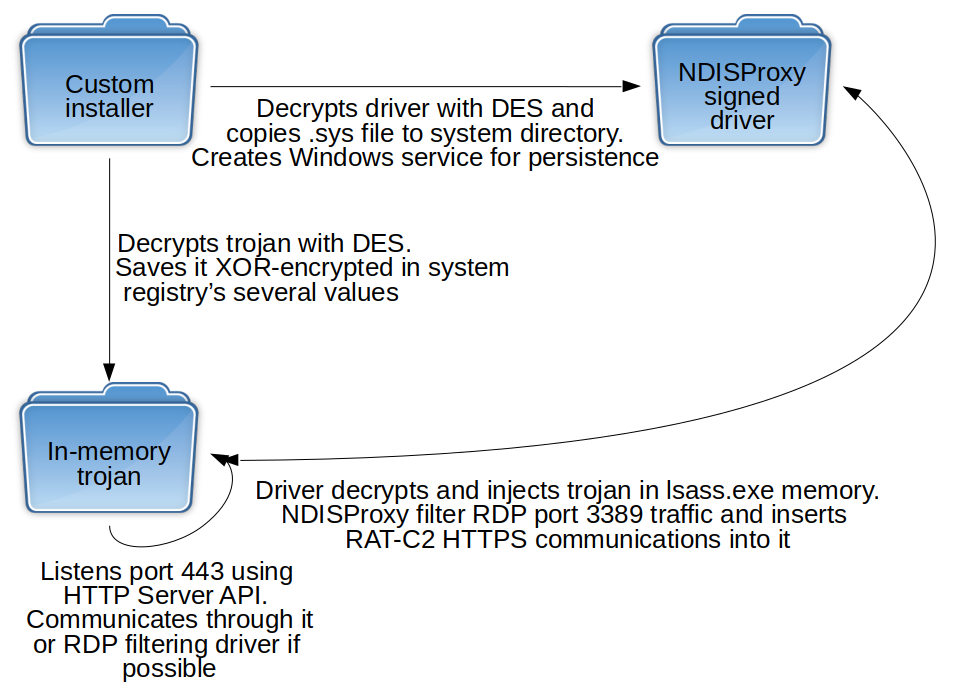 These modules allow attackers to silently move laterally in the infected infrastructure, but don’t allow them to communicate with an external C2 if the new infected host only has a LAN IP. Because of this, the operators used an Earthworm SOCKS tunneler in order to connect the LAN of the infected host to the external C2. They also used the Scanline network scanner to find file shares (port 135, Server Message Block, SMB) which they use to spread malware with administrative passwords, compromised with keyloggers.

How does it spread?

We detected the distribution of the 32-bit dropper used for this campaign among different targets by the end of March 2018. However, we didn’t observe any spear phishing or watering hole activity. We believe the operators spread their infectors through networks that were already compromised instead.

How does it work?

The initial infectors are 32-bit portable executable files capable of installing 32-bit or 64-bit drivers depending on the target. The installer logs all the installation process steps in the load.log file within the same directory. It checks if the OS is Windows Vista or above (major version equal to 6 or higher) and decrypts its initial configuration using the DES (Data Encryption Standard) algorithm.

The set of well-known port numbers (HTTP, HTTPS, SMB, POP3S, MSSQL, PPTP and RDP) in the configuration is not used, which along with the “[test]” strings in messages suggests this malware is still under development.

The installer creates a semaphore (name depending on configuration) Global\Door-ndisproxy-mn and checks if the service (name also depends on configuration) ndisproxy-mn is already installed. If it is, the dropper writes “door detected” in load.log. The autorun Windows service running NDISProxy is the “door” in developer terms.

The installer creates the corresponding autostart service and registry keys. The “Altitude” registry value (unique ID for the minifilter driver) is set to 321 000, which means “FSFilter Anti-Virus” in Windows terms:

This digitally signed driver is the most interesting artefact used in this campaign. The network filtering modules serve two purposes: first they decrypt and inject the RAT; second, they set its communication channel through RDP port 3389.

The drivers are signed with a digital certificate issued by VeriSign to LeagSoft, a company developing information security software such as data loss prevention (DLP) solutions. 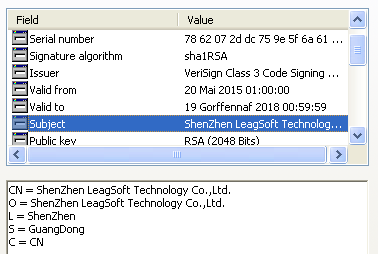 This driver makes extensive use of third-party publicly available C source code, including from the Blackbone repository available at GitHub.

The driver again checks if the Windows version is higher than Vista, then creates a device named \\Device\\ndisproxy-%s (where the word after “-” varies – see Appendix for all variants) and its corresponding symbolic link \\DosDevices\\Global\\ndisproxy-%s.

The driver combines all the Trojan-related registry values from HKLM\SOFTWARE\Classes\32ndisproxy-mn and de-XORs them with a six-byte hardcoded value. It then injects the resulting Trojan executable shellcode into lsass.exe memory using Blackbone library functions.

NDISProxy works as a network traffic filter engine, filtering the traffic going through RDP port 3389 (the port number is hardcoded) and injecting messages into it.

The communication between the user-mode in-memory Trojan and the driver goes through the custom control codes used by the DeviceIoControl() Windows API function. Apart from the auxiliary codes, there are two codes worth mentioning:

Please note this Trojan exists in memory only; the data above is for the decrypted Windows registry content without the initial shellcode

This RAT is decrypted by the NDISProxy driver from the system registry and injected into the lsass.exe process memory. Code starts with a shellcode – instead of typical Windows portable executable files loader this malware implements memory mapping by itself.

This Trojan is a full-featured RAT capable of executing common tasks such as command execution and downloading/uploading files. This is implemented through a couple dozen C++ classes such as CMFile, CMFile, CMProcess, TFileDownload, TDrive, TProcessInfo, TSock, etc. The first stage custom installer utilizes the same classes. The Trojan uses HTTP Server API to filter HTTPS packets at port 443 and parse commands. 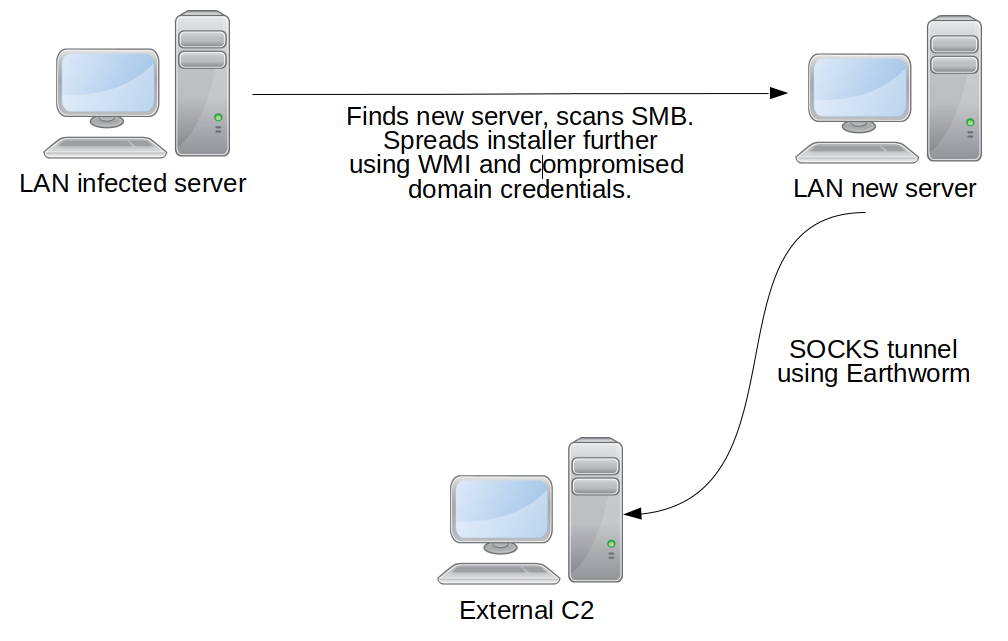 The Trojan is an HTTP server, allowing LAN connection. It uses a SOCKS tunneler to communicate with the C2

This Trojan is used by attackers to gather a target’s data, make lateral movements and create SOCKS tunnels to their C2 using the Earthworm tunneler. This tool is publicly available and popular among Chinese-speaking actors. Given that the Trojan is an HTTPS server itself, we believe that the SOCKS tunnel is used for targets without an external IP, so the C2 is able to send commands.

Who’s behind it and why?

We found that this campaign targeted Middle Asian governments’ entities. We believe the attack was highly targeted and was linked to a high-level meeting. We assess with high confidence that the Chinese-speaking LuckyMouse actor is responsible for this new campaign using the NDISProxy tool described in this report.

In particular, the choice of the Earthworm tunneler is typical for Chinese-speaking actors. Also, one of the commands used by the attackers (“-s rssocks -d 103.75.190[.]28 -e 443”) creates a tunnel to a previously known LuckyMouse C2. The choice of victims in this campaign also aligns with the previous interests shown by this actor.

We have observed a gradual shift in several Chinese-speaking campaigns towards a combination of publicly available tools (such as Metasploit or CobaltStrike) and custom malware (like the C++ last stage RAT described in this report). We have also observed how different actors adopt code from GitHub repositories on a regular basis. All this combines to make attribution more difficult.

This campaign appears to demonstrate once again LuckyMouse’s interest in Central Asia and the political agenda surrounding the Shanghai Cooperation Organization.

Note: The indicators in this section are valid at the time of publication. Any future changes will be updated directly in the corresponding .ioc file.

A lot of legitimate LeagSoft products are signed with the following certificate. Please don’t consider all signed files as malicious.