The previous story described an unusual way of distributing malware under disguise of an update for an expired security certificate. After the story went out, we conducted a detailed analysis of the samples we had obtained, with some interesting findings. All of the malware we examined from the campaign was packed with the same packer, which we named Trojan-Dropper.NSIS.Loncom. The malware uses legitimate NSIS software for packing and loading shellcode, and Microsoft Crypto API for decrypting the final payload. Just as the earlier find, this one was not without its surprises, as one of the packaged samples contained software used by APT groups.

Loncom utilizes NSIS for running shellcode contained in a file with a name that consists of numbers. In our example, the file is named 485101134: 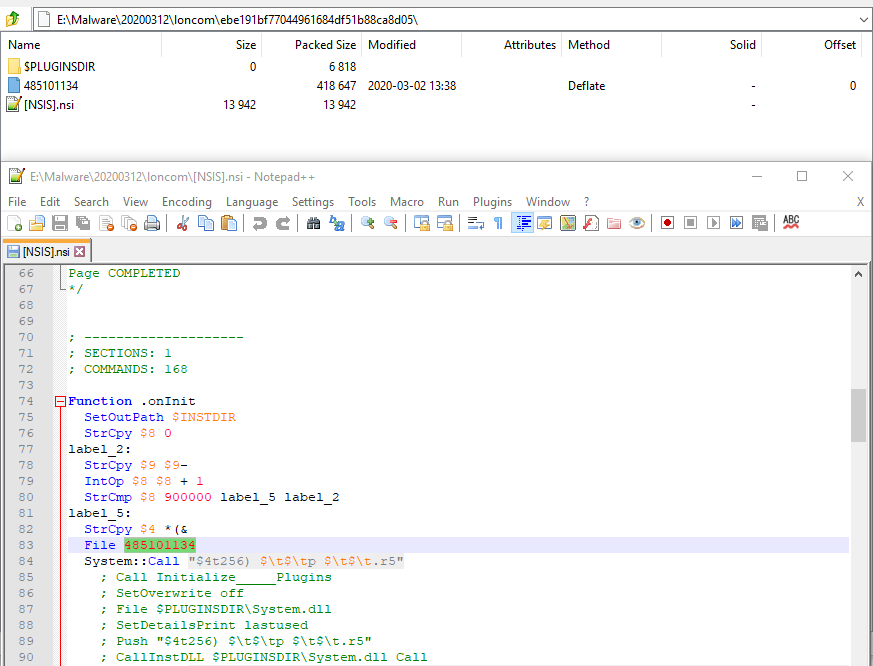 Overview of the NSIS archive contents

Once the shellcode is unpacked to the hard disk and loaded into the memory, an NSIS script calculates the starting position and proceeds to the next stage.

What the shellcode does

Before proceeding to decrypt the payload, the shellcode starts decrypting itself piece by piece, using the following algorithm: 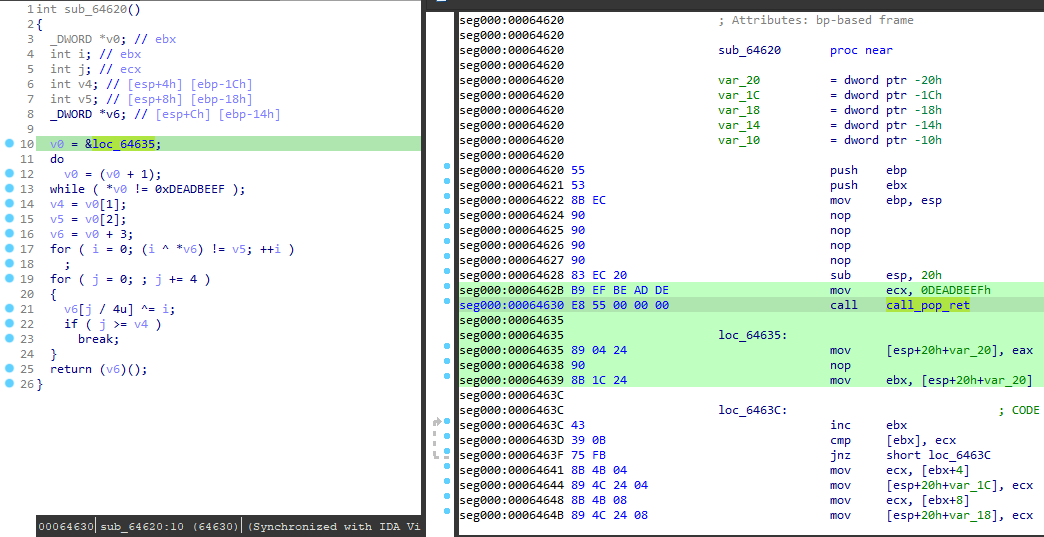 Decrypting the next part of the shellcode

Here’s the code that performs the algorithm described above: 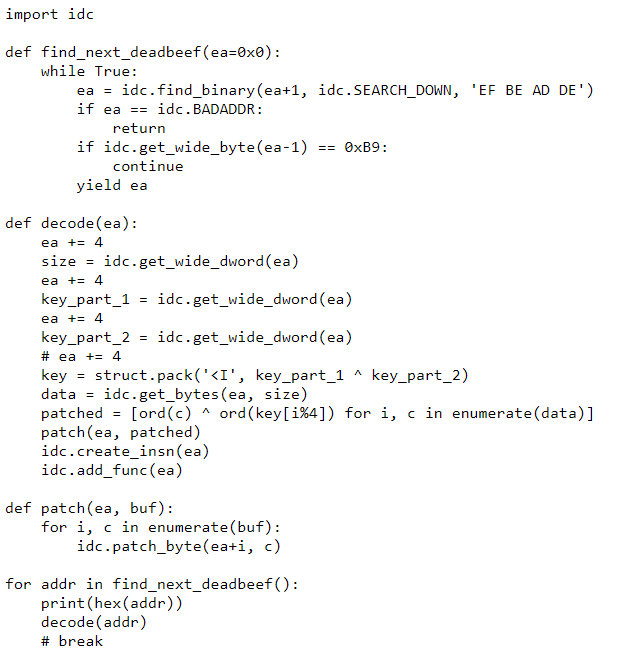 After several such iterations of block decryption, the shellcode switches to active steps, loading libraries and retrieving the addresses of required functions with the help of the APIHashing technique. This helps avoid stating the names of requested functions directly, providing their hashes instead. When searching for functions by hash, a hash will be calculated for each element from the library export table until it matches the target.

Then, Loncom decrypts the payload contained in the same file as the shellcode and proceeds to run it. The payload is encrypted with an AES-256 block cipher. The decryption key is stated in the code, and the payload offset and size are passed from the NSIS script. 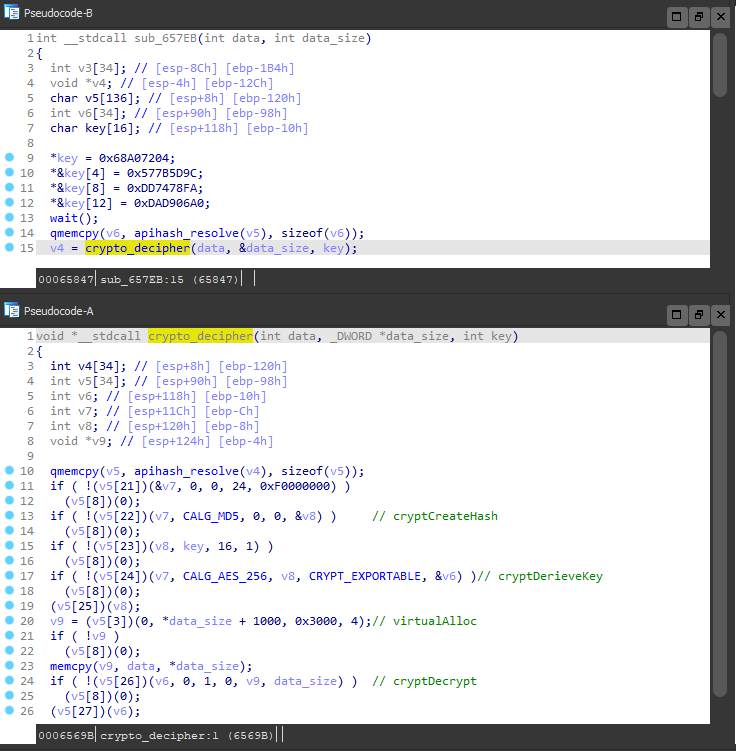 The main part of the shellcode: decrypting the payload

For automated Loncom unpacking, we need to find out how data is stored in the packed NSIS installers, obtain the payload offset and size from the NSIS script, and pull the key from the shellcode.

After a brief analysis, we managed to find that the NSIS installers have the following structure:

As we have obtained the encrypted file, now all we need is to find the payload offset and size, and proceed to decrypting the payload and the shellcode.

As all arguments in the NSIS operation codes when using plugins are passed as strings, we need to retrieve from the header string table all strings that look like numbers within the logical limits: from 0 to (file size – shellcode size).
NSIS unpacking code: 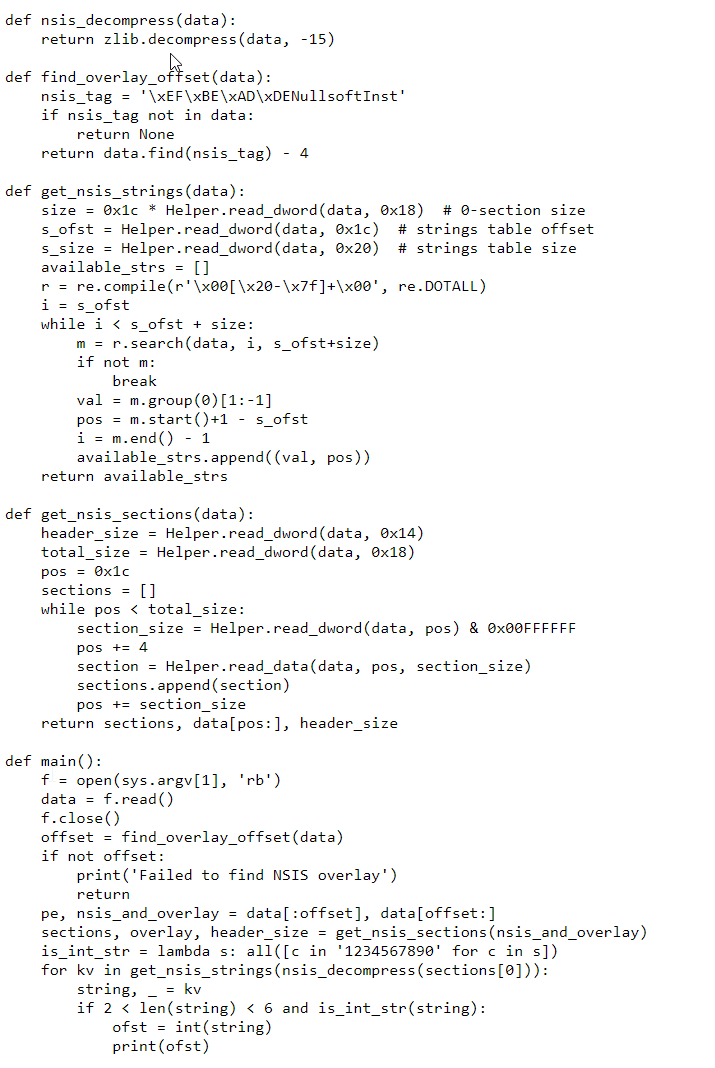 To simplify determining the payload offset and size, we can recall the structure of the file with the shellcode: encrypted blocks are decrypted from the smallest address to the largest, top to bottom, and the payload is located above the shellcode. Thus, we can determine the position of the 0xDEADBEEF byte and consider it the end of the encrypted data (aligning as required, because AES is a block cipher).

To decrypt the payload, we need to:

Besides Mokes and Buerak, which we mentioned in the previous article, we noticed packed specimens of Backdoor.Win32.DarkVNC and Trojan-Ransom.Win32.Sodin families, also known as REvil and Sodinokibi. The first is a type of backdoor used for controlling an infected machine via the VNC protocol. The second is a ransomware that encrypts the victim’s information and threatens to publish it.
However, the most exciting find was the Cobalt Strike utility, used both by legal pentesters and by various APT groups. The command center of the sample that contained Cobalt Strike had previously been seen distributing CactusTorch, a utility for running shellcode present in Cobalt Strike modules, and the same Cobalt Strike packed with a different packer.