Of all the Q4 2015 events in the world of DDoS attacks and the tools used to launch them, we picked out those that, in our opinion, best illustrate the main trends behind the evolution of these threats.

Web resources powered by the WordPress content management system (CMS) are popular with cybercriminals who carry out DDoS attacks. This is because WordPress supports the pingback function that notifies the author of a post published on a WordPress site when someone else links to that post on another site running the same CMS. When the post containing the link to the other web resource is published on a site with the enabled pingback function, a special XML-RPC request is sent to the site where the link leads and that resource receives and processes it. During processing, the recipient site may call the source of the request to check for the presence of the content.

This technology allows a web resource (victim) to be attacked: a bot sends a specially formed pingback request specifying the address of the victim resource as the sender to a WordPress site with the pingback function enabled. The WordPress site processes the request from the bot and sends the reply to the victim’s address. By sending pingback requests with the victim’s address to lots of WordPress resources with pingback enabled, the attackers create a substantial load on the victim resource. This is why web resources running WordPress with the pingback function enabled are of interest to cybercriminals.

In Q4 2015, resources in 69 countries were targeted by DDoS attacks #KLReport

In the fourth quarter of 2015, cybercriminals did not limit their activities to sites supporting pingback; they carried out a mass compromise of resources running WordPress. This was probably caused by the emergence of “zero-day” vulnerabilities either in the CMS or one of its popular plugins. Whatever the cause, we registered several cases of JavaScript code being injected into the body of web resources. The code addressed the victim resource on behalf of the user’s browser. At the same time, the attackers used an encrypted HTTPS connection to impede traffic filtering.

The power of one such DDoS attack registered by Kaspersky Lab experts amounted to 400 Mbit/sec and lasted 10 hours. The attackers used a compromised web application running WordPress as well as an encrypted connection to complicate traffic filtering.

In October 2015, experts registered a huge number of HTTP requests (up to 20,000 requests per second) coming from CCTV cameras. The researchers identified about 900 cameras around the world that formed a botnet used for DDoS attacks. The experts warn that in the near future new botnets utilizing vulnerable IoT devices will appear.

In Q4 2015, mail services were especially popular with DDoS attackers.

In particular, activity was detected by the Armada Collective cybercriminal group, which uses DDoS attacks to extort money from its victims. The group is suspected of being involved in an attack on the ProtonMail secure e-mail service in which the cybercriminals demanded $6000 to end the DDoS attack.

In Q4 2015, the largest numbers of DDoS attacks targeted victims in China, the US and South Korea. #KLReport

As well as the ProtonMail encrypted email service, the FastMail and the Russian Post e-mail services were also targeted.

This report contains the DDoS Intelligence statistics for the fourth quarter of 2015.

It is important to note that DDoS Intelligence statistics are limited to those botnets that were detected and analyzed by Kaspersky Lab. It should also be highlighted that botnets are just one of the tools used to carry out DDoS attacks; therefore, the data presented in this report does not cover every DDoS attack that has occurred within the specified time period.

By the end of 2015, the geography of DDoS attacks narrowed to 69 countries. 94.9% of targeted resources were located in 10 countries. 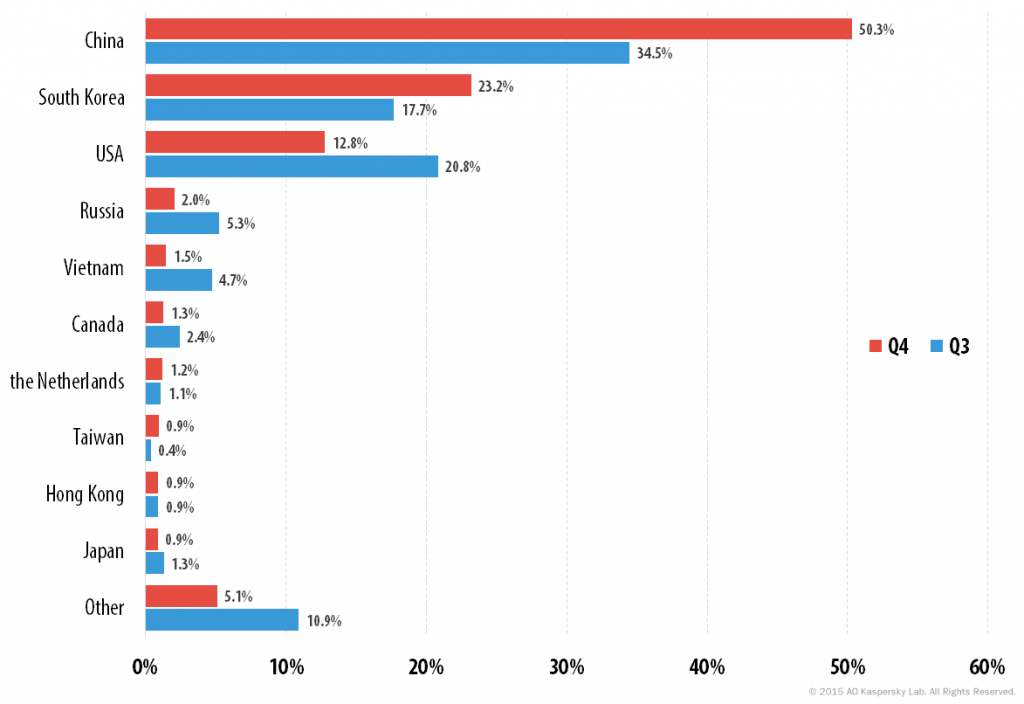 The share of DDoS targets located in the US dropped by 8 percentage points, which saw it move down to third place and South Korea climb to second.

The statistics show that 94% of all attacks had targets within the Top 10 countries: 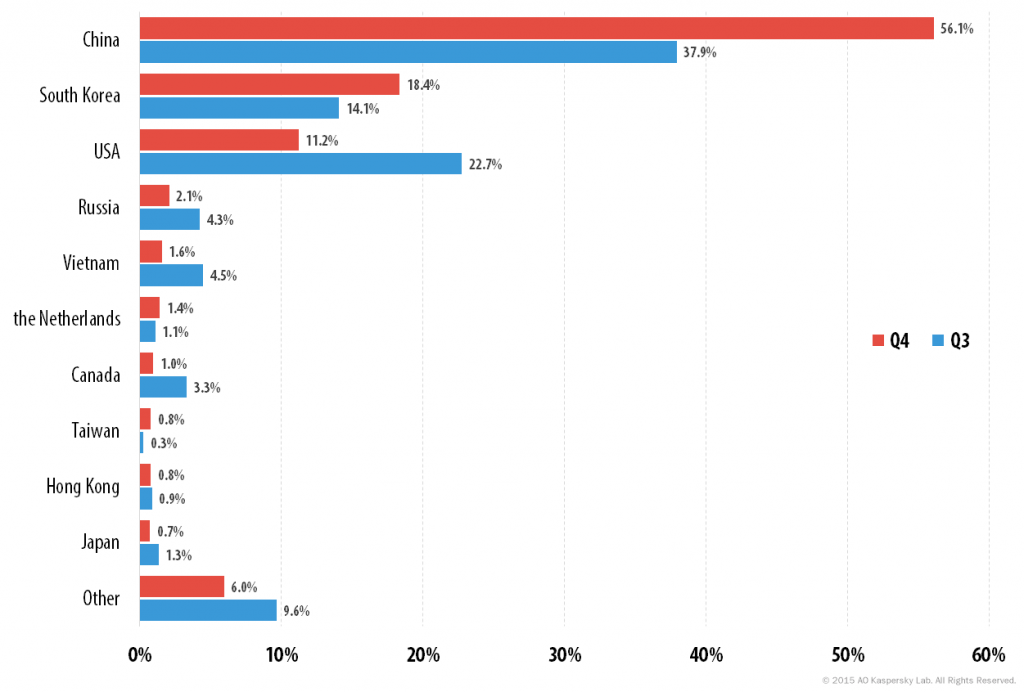 In Q4 2015, DDoS activity was distributed more or less evenly, with the exception of one peak that fell in late October and an increase in activity in early November. 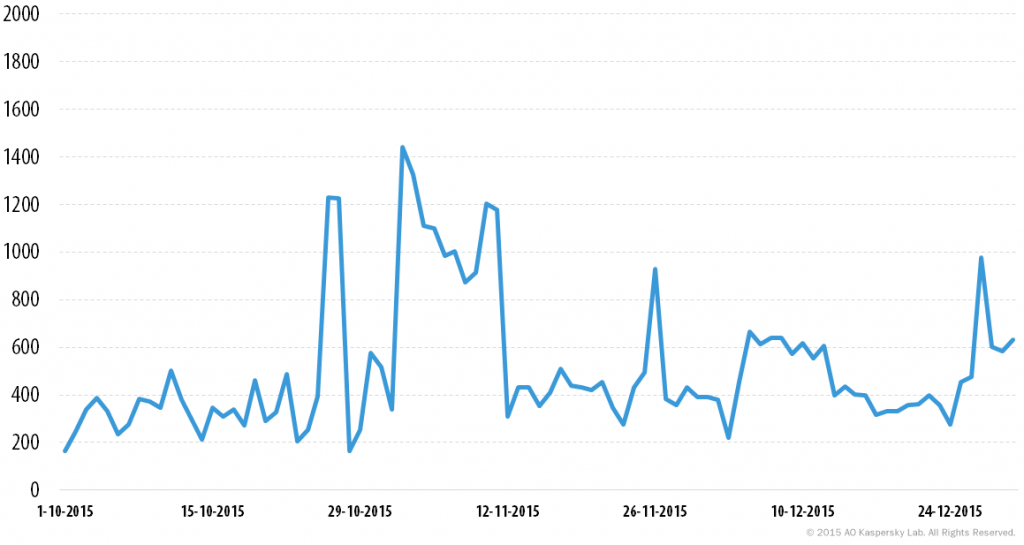 Monday and Tuesday were the most active days of the week in terms of DDoS attacks. In Q4, the number of attacks carried out on a Monday was 5.7 percentage points more than in the previous quarter. The figure for Tuesdays changed slightly (-0.3 percentage points). 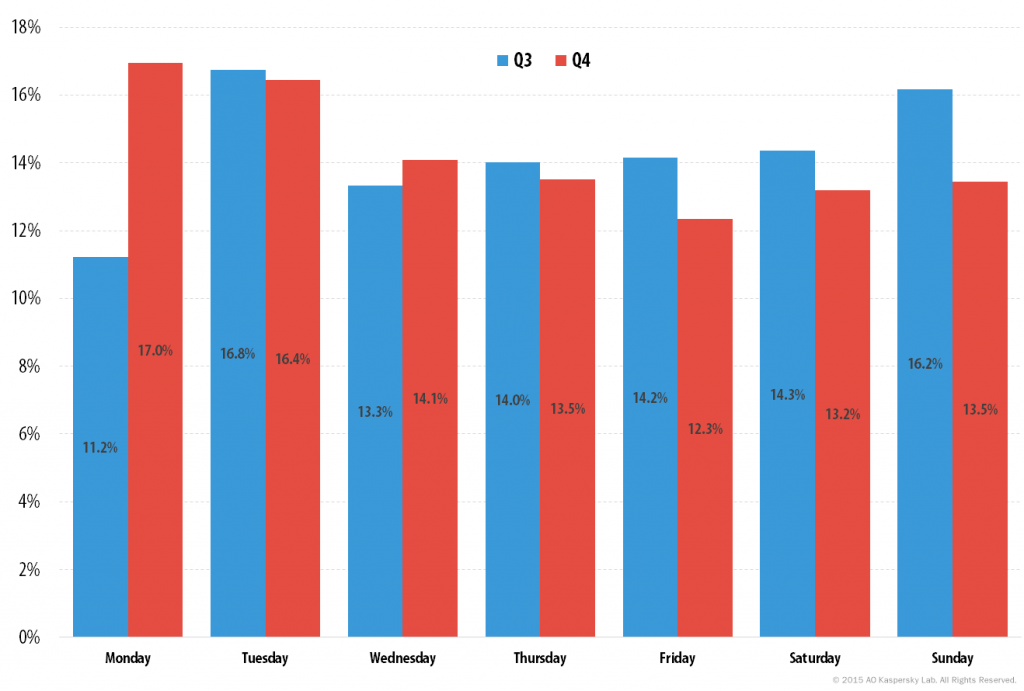 Distribution of DDoS attack numbers by day of the week, Q4 2015

97.5% of DDoS targets in Q4 2015 (vs. 99.3% in Q3) were attacked by bots belonging to one family. In just 2.4% of all cases cybercriminals launched attacks using bots from two different families (used by one or more botnet masters). In 0.1% of cases three or more bots were used, mainly from the Sotdas, Xor and BillGates families.

The ranking of the most popular attack methods remained unchanged, although SYN DDoS (57%) and TCP DDoS (21.8%) added 5.4 and 1.9 percentage points respectively. 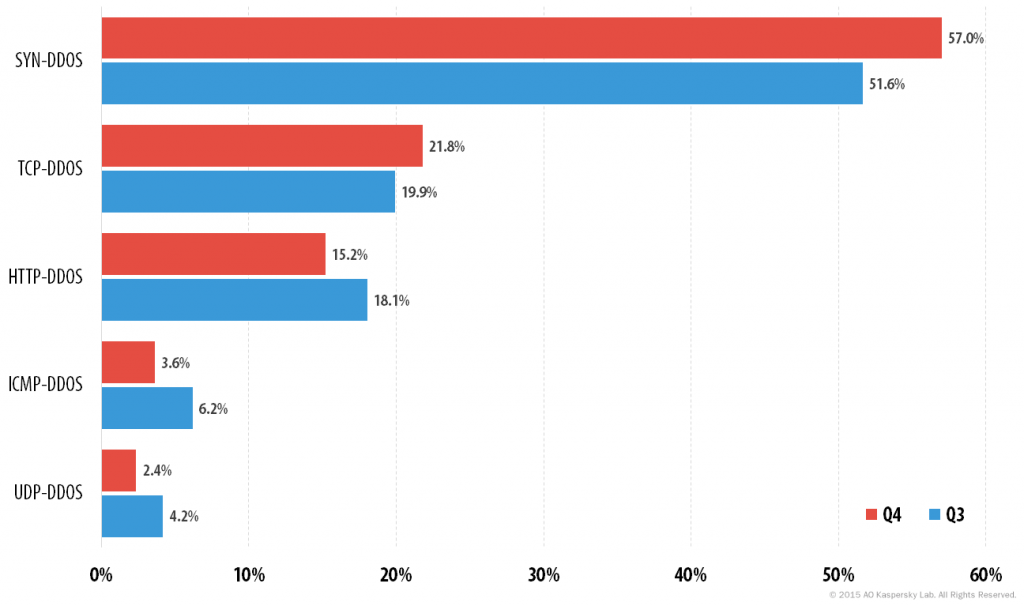 The distribution of DDoS attacks by type 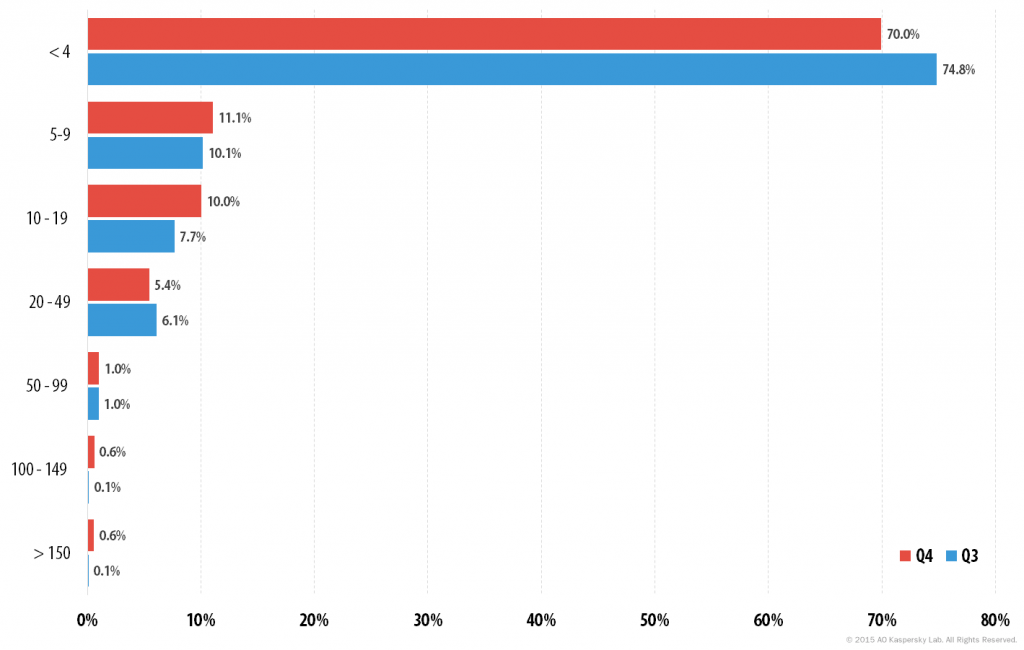 The maximum duration of attacks increased again in the fourth quarter. The longest DDoS attack in the previous quarter lasted for 320 hours (13.3 days); in Q4, this record was beaten by an attack that lasted 371 hours (15.5 days).

In Q4 2015, South Korea maintained its leadership in terms of the number of C&C servers located on its territory, with its share growing by 2.4 percentage points. The US share decreased slightly – from 12.4% to 11.5%, while China’s contribution grew by 1.4 percentage points.

The Top 3 ranking remained the same. The countries in fourth and fifth switched places – Russia’s share increased from 4.6% to 5.5%, while the share of the UK declined from 4.8% to 2.6%. 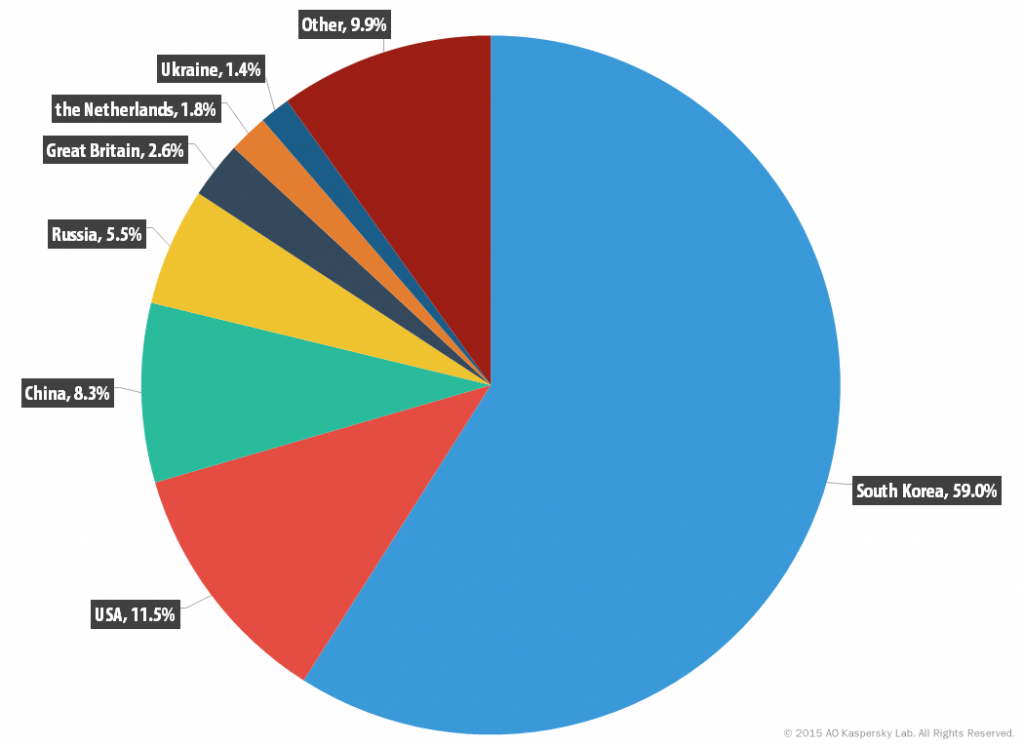 Distribution of botnet C&C servers by country in Q4 2015

The proportion of DDoS attacks from Linux-based botnets in Q4 2015 was 54.8% #KLReport

In Q4, the correlation between active bots created from Windows and Linux saw the proportion of attacks by Linux bots grow from 45.6% to 54.8%. 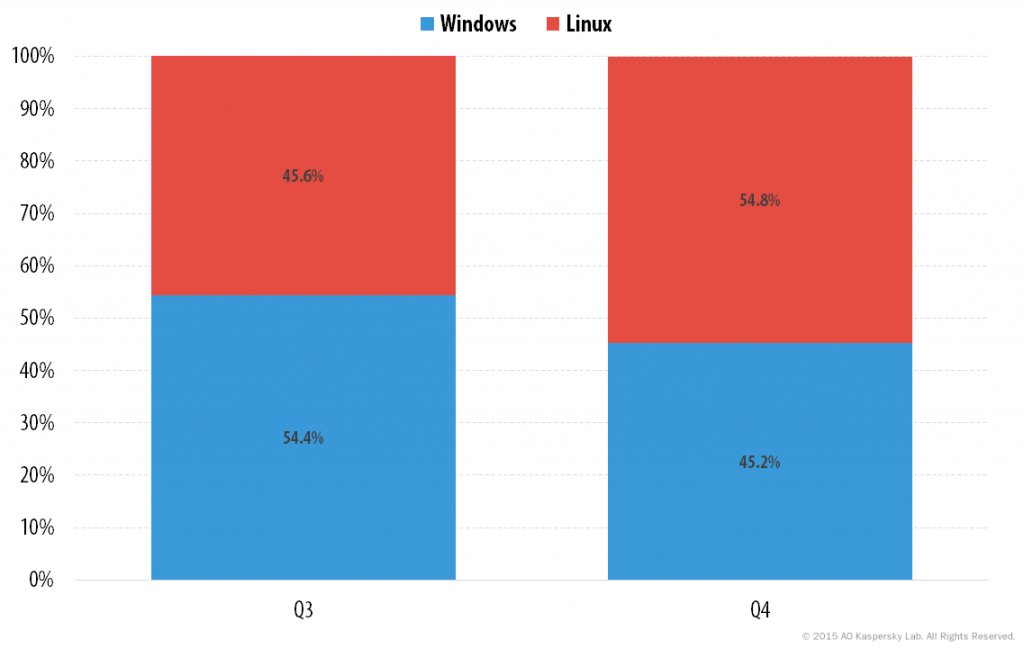 Events in Q4 2015 demonstrated that the cybercriminals behind DDoS attacks utilize not only what are considered to be classic botnets that include workstations and PCs but also any other vulnerable resources that are available. These include vulnerable web applications, servers and IoT devices. In combination with new channels for carrying out reflection DDoS attacks this suggests that in the near future we can expect a further increase in DDoS capacity and the emergence of botnets consisting of new types of vulnerable devices. 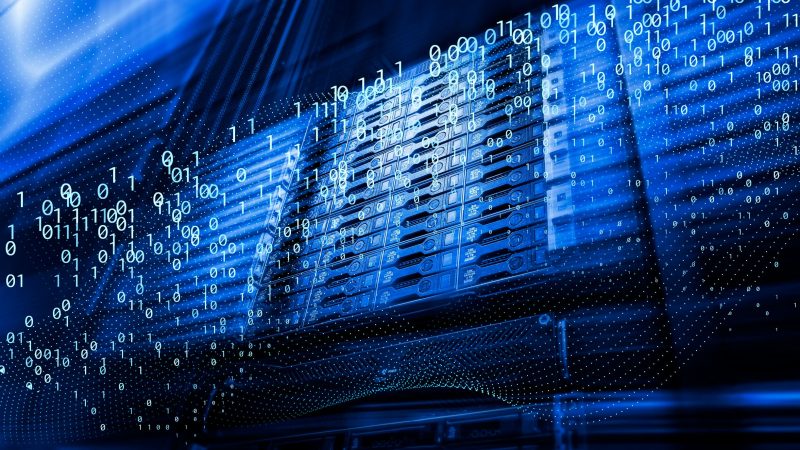