This report covers our team’s incident response practices for the year 2018. We have thoroughly analyzed all the service requests, customer conversations and incident response deliverables to provide you an overview in numbers. The report includes statistics on how companies reveal data breaches and compromises, the attack vectors most commonly used by adversaries, how long they remain inside a company’s infrastructure and much more. We also provide some high-level recommendations to improve resilience against such attacks.

The data used in this report comes from the wide range of incident investigation services provided by Kaspersky teams. The main digital forensic and incident response operations unit is called the Global Emergency Response Team (GERT) and includes experts in Europe, Latin America, North America, Russia and the Middle East. However, our operational coverage is much greater and that’s why our company focused many more resources on incident response and malware analysis activities. An example of this is the advanced targeted attack investigations by the Global Research and Analysis Team (GReAT). 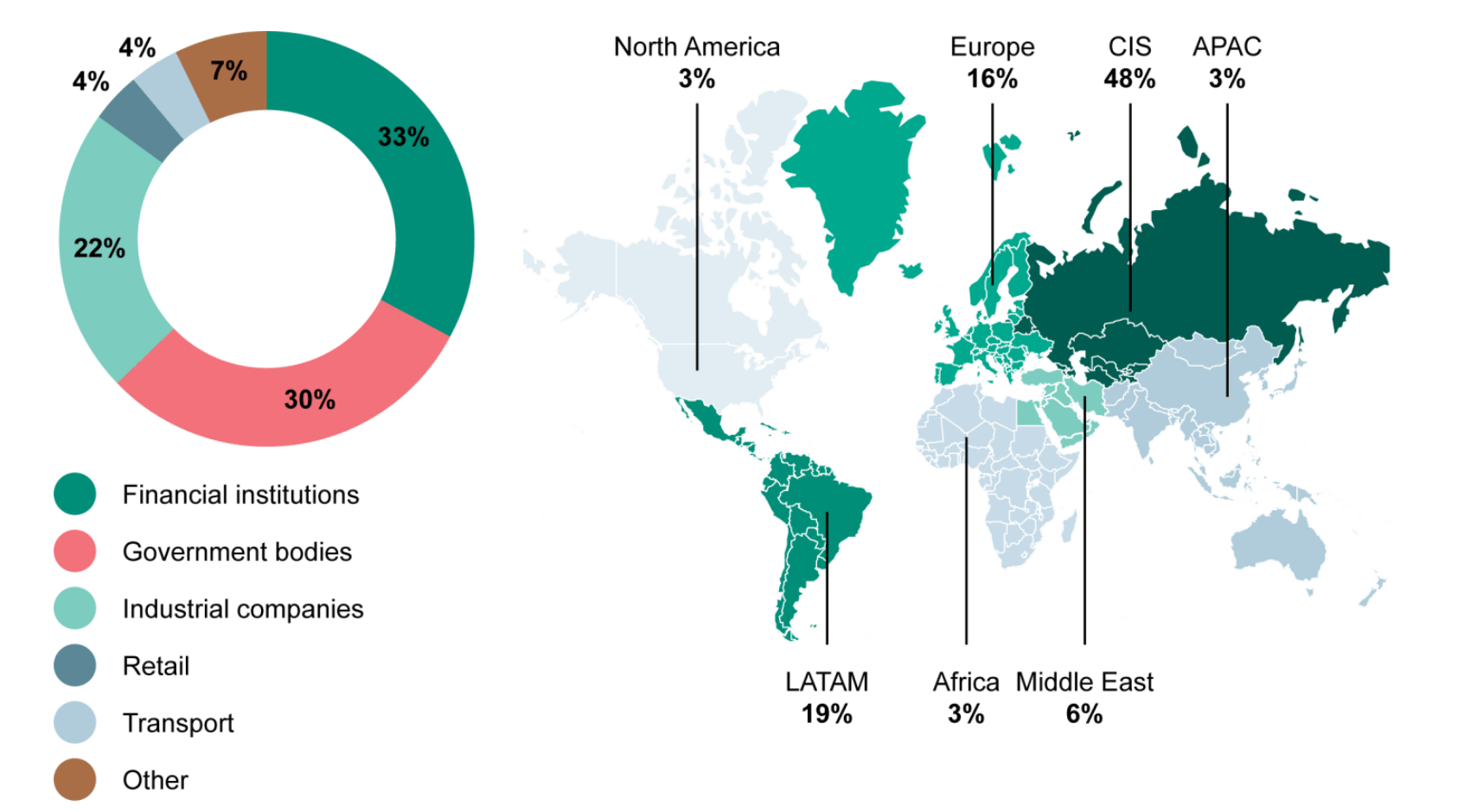 More than half of the requests for investigation were initiated by customers after detecting an attack that had visible consequences, such as unauthorized money transfers, workstations encrypted by ransomware, service unavailability, etc. This indicates the need to improve attack detection methods and incident response procedures within a company to avoid financial losses and to minimize the impact of attacks on the company’s infrastructure.

It should be noted that in two out of three cases, investigation of incidents related to the detection of suspicious files or network activity revealed an actual attack on the customer’s infrastructure. In the other cases, suspicious activity was caused by unusual user actions or software behavior related to security misconfigurations.

The most common reason for customer requests was a ransomware attack. This category of attack is characterized by rapid development, difficulty of early detection, and contrastingly obvious consequences. 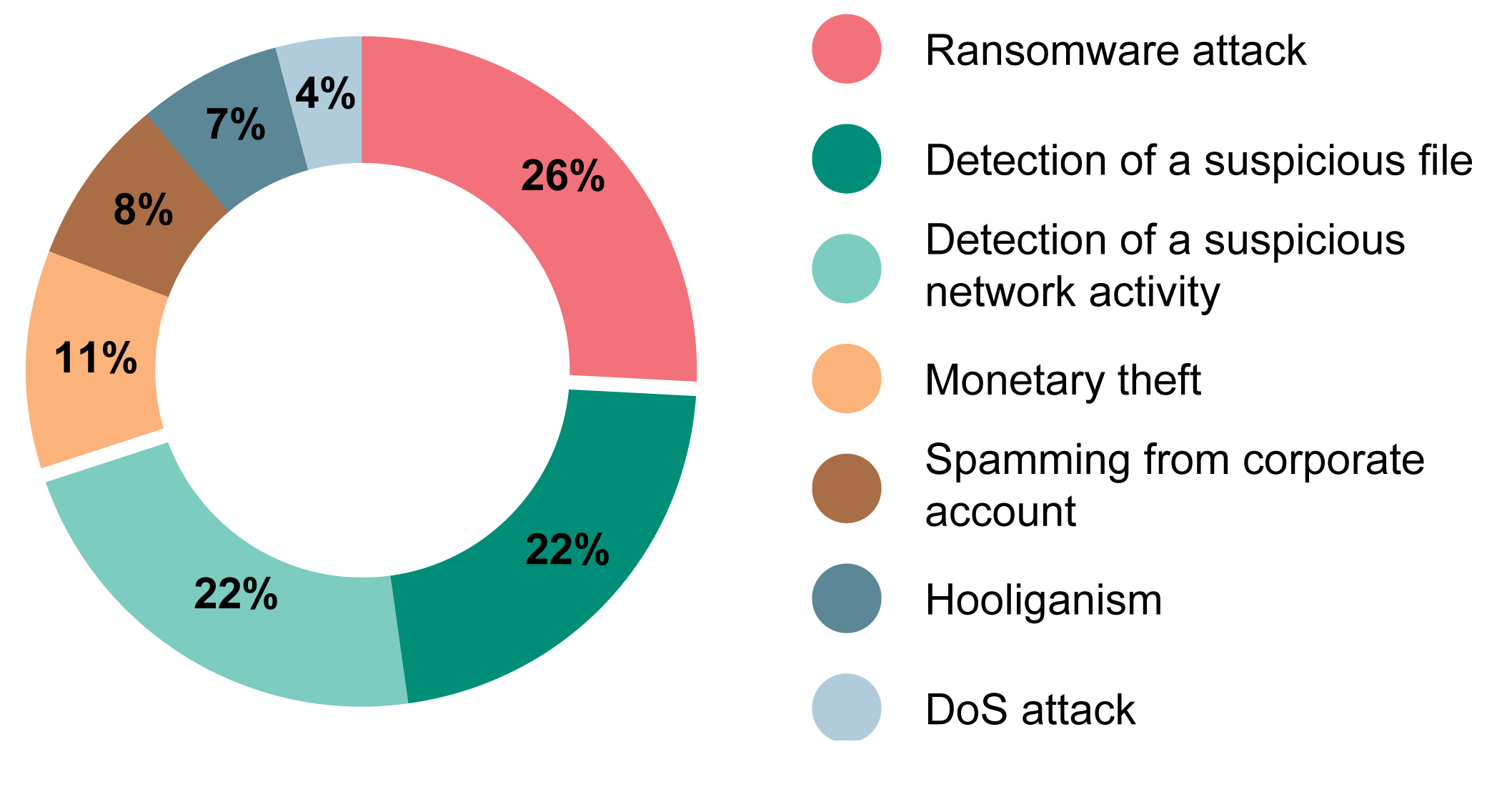 Experts from Kaspersky Anti-Malware Research Department ranked the most common types of ransomware which targeted organizations in 2018.

If a ransomware attack is detected, it is recommended to:

There are many more incidents in the wild

Only 22% of companies where evidence of malicious activity was detected requested an Incident Response service.

Kaspersky customers often request detailed analysis of the data collected by automated monitoring tools. As a result of analyzing this data, the following conclusions were reached: 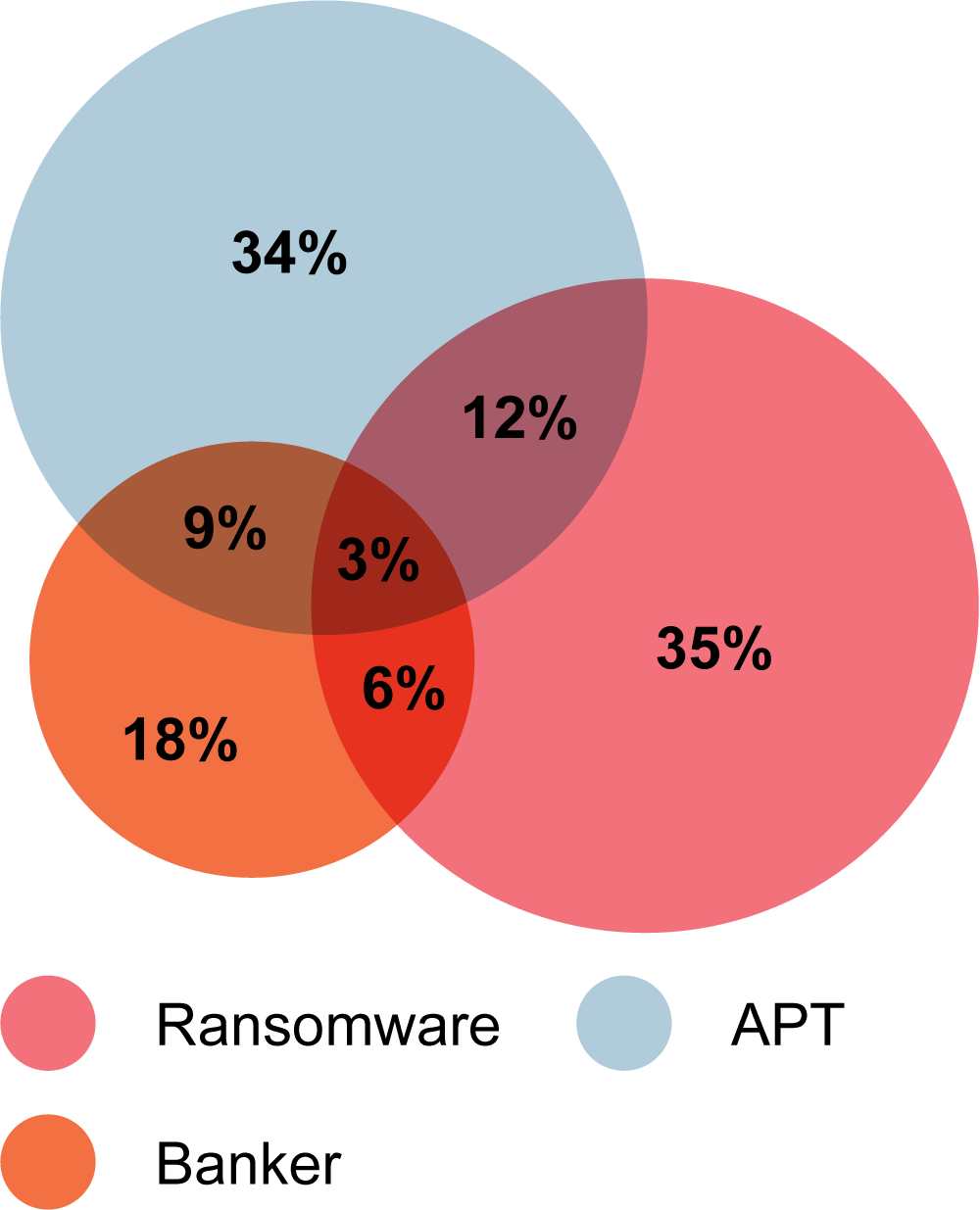 81% of organizations that provided data for analysis were found to have indicators of malicious activity in their internal network.

One out of three organizations exhibited signs of an advanced targeted attack.

Attack trends and key security threats were identified for the following major sectors: 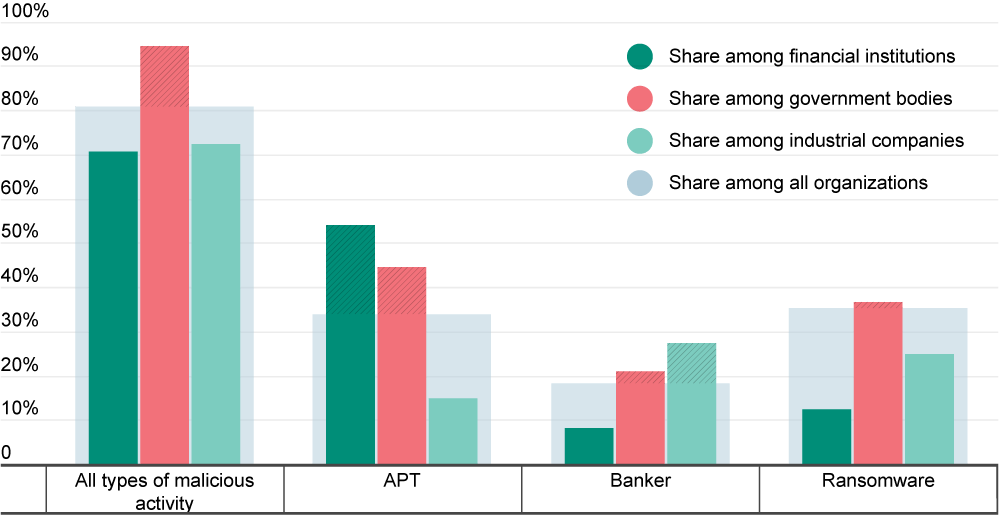 The remote management interface of the RDP service was used in the initial attack vector in one out of three incidents. In the majority of cases, an adversary successfully obtained a valid user’s credentials as a result of a brute-force attack on the RDP service. Such an attack usually lasted just a few hours because weak or dictionary passwords were used. In addition, in most cases the same credentials were used for authentication in different systems, so an attacker was able to reuse the usernames and passwords to access additional hosts.

In one third of attacks through remote management interfaces, the valid credentials were known to the intruder in advance (no brute-force attempts were detected). They were probably obtained using social engineering methods or were found on unsecured resources with public access (for example, if an employee used the same password to register on third party resources). 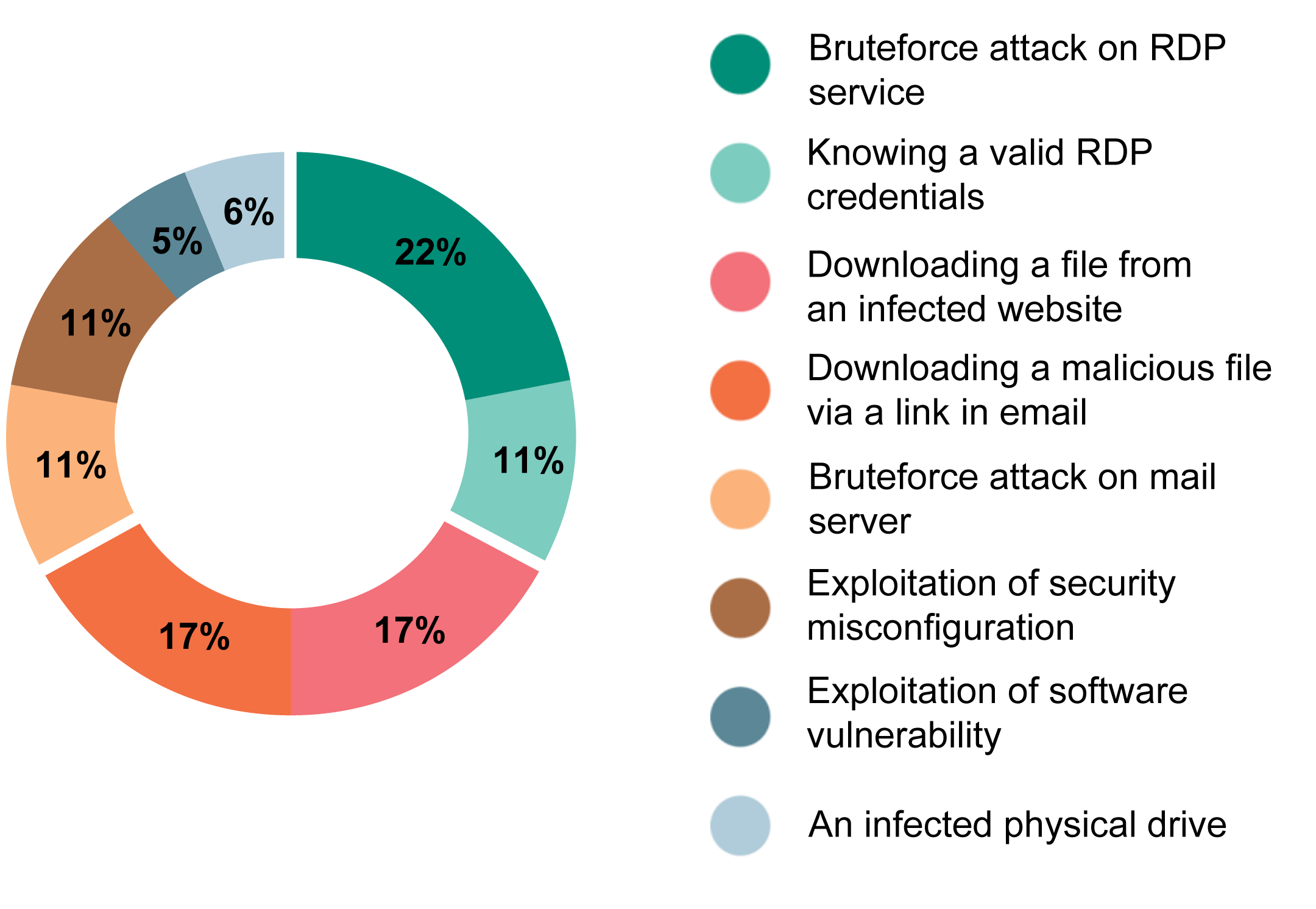 33% of attacks occurred due to a lack of security awareness among employees. An employee downloaded a malicious file from untrusted sources and launched it, allowing an adversary to gain control over the workstation. While it is impossible to completely eliminate human error, regular staff training on information security awareness can significantly reduce the success of attacks using social engineering methods.

From a long-term perspective, the following strategies are recommended:

For a number of incidents, Kaspersky specialists have established the time period between the beginning of the attacker activity and the end of the attack. After analysis, all incidents were divided into three categories of attack duration. 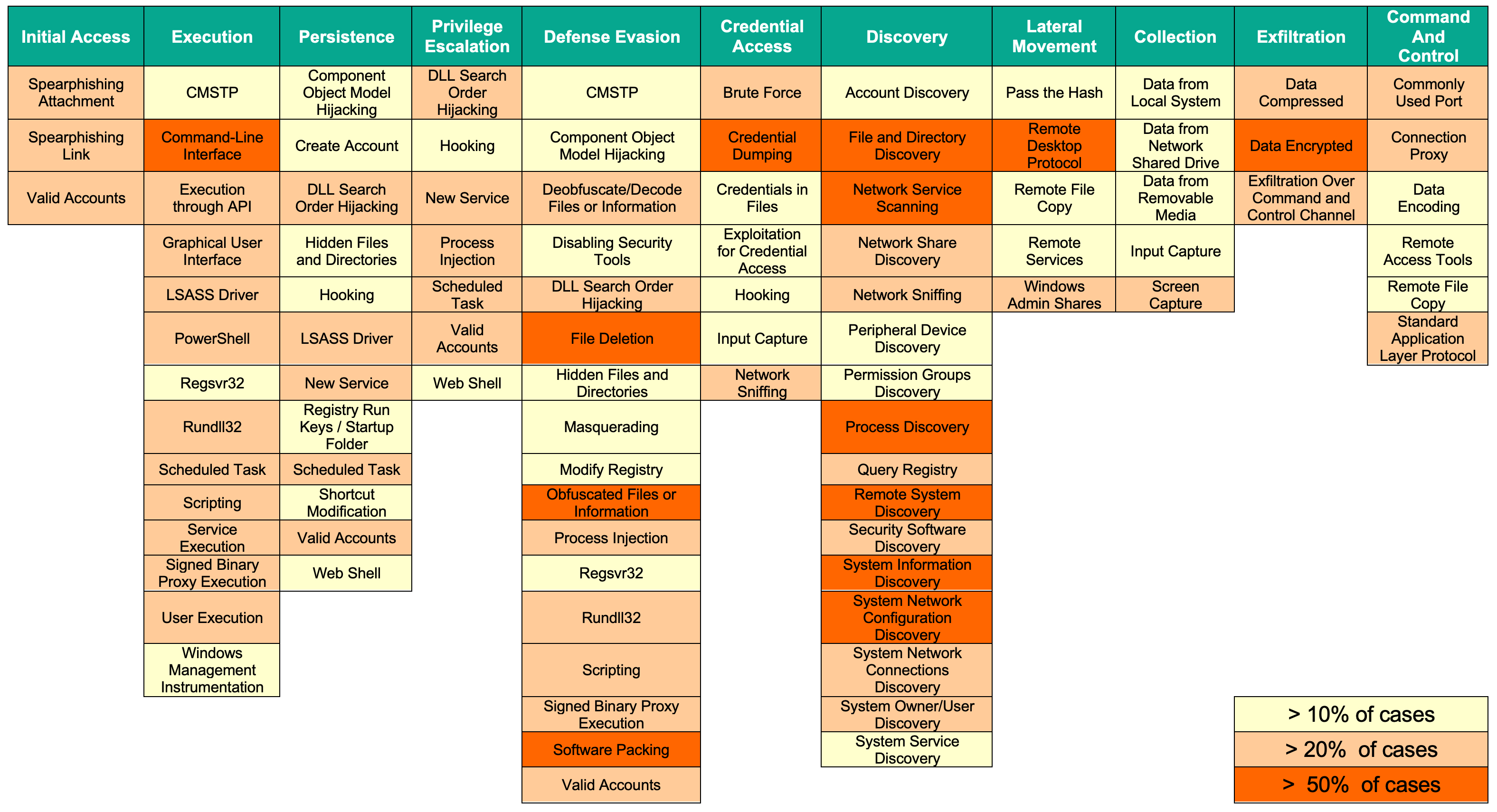 For a number of incidents, a list of MITRE techniques was prepared. The ATT&CK table below shows the frequency with which techniques were observed in the investigated incidents. Unfortunately, not many companies are currently mature enough to gain value from the ATT&CK framework or common descriptions such as STIX. For those capable of ingesting this kind of information, make sure to highlight mentioned techniques in your security tools of choice.

From the statistics in this report, we can conclude that cyberattacks target all types of businesses around the globe. It means that having a plan to defend and quickly respond to such attacks is no longer an option; it’s a must, regardless of business type.

Maintaining and improving an already existing incident response plan will accelerate handling of security breaches through proper containment, analysis and eradication of infected elements in the network. The risk of re-infection is reduced and defense against complex attacks is improved by utilizing the lessons learned from each incident to enhance the existing security process in the environment.

Along with a powerful auditing policy and a log retention period of at least six months to one year, developing guided procedures for proper handling of digital evidence will definitely help in faster and more complete analysis of incidents by experts. This results in quicker containment and reduces possible loss of assets, data or reputation.

Frequent security assessments have proved effective in discovering weaknesses early enough to fix them and hardening overall infrastructure before adversaries reveal those weaknesses and make use of them in an offensive attack.

Furthermore, we can see that humans are still the weakest link in the security chain. Even with a high-level security policy and security controls in place, a single employee uneducated in information security can trigger a major compromise of the internal environment and assets.