There is an episode in the dystopian near-future series Black Mirror about an implanted chip that allows users to record and replay everything they see and hear. A recent YouGov survey found that 29% of viewers would be willing to use the technology if it existed.

If the Black Mirror scenario sounds a bit too much like science fiction, it’s worth noting that we are already well on the way to understanding how memories are created in the brain and how this process can be restored. Earlier this year proof of concept experiments showed that we can boost people’s ability to create short-term memories.

The seeds of the future are already here

The hardware and software to underpin this exists too: deep brain stimulation (DBS) is a neurosurgical procedure that involves implanting a medical device called a neurostimulator or implantable pulse generator (IPG) in the human body to send electrical impulses, through implanted electrodes, to specific targets in the brain for the treatment of movement and neuropsychiatric disorders. It is not a huge leap for these devices to become ‘memory prostheses’ since memories are also created by neurological activity in the brain.

To better understand the potential future threat landscape facing memory implants, researchers from Kaspersky Lab and the University of Oxford Functional Neurosurgery Group have undertaken a practical and theoretical threat review of existing neurostimulators and their supporting infrastructure.

The attached report is the outcome of that research. It should be noted that because much of the work involving neurostimulators is currently handled in medical research laboratories, it’s not easy to practically test the technology and associated software for vulnerabilities. However, much can be learned from handling the devices and seeing them used in situ, and this research involved both.

Among other things, the researchers found existing and potential risk scenarios, each of which could be exploited by attackers. These include:

Within five years, scientists expect to be able to electronically record the brain signals that build memories and then enhance or even rewrite them before putting them back into the brain. A decade from now, the first commercial memory boosting implants could appear on the market – and, within 20 years or so, the technology could be advanced enough to allow for extensive control over memories.

The healthcare benefits of all this will be significant, and this goal is helping to fund and drive research and development. However, as with other advanced bio-connected technologies, once the technology exists it will also be vulnerable to commercialization, exploitation and abuse.

New threats resulting from this could include the mass manipulation of groups through implanted or erased memories of political events or conflicts; while ‘repurposed’ cyberthreats could target new opportunities for cyber-espionage or the theft, deletion of or ‘locking’ of memories (for example, in return for a ransom). 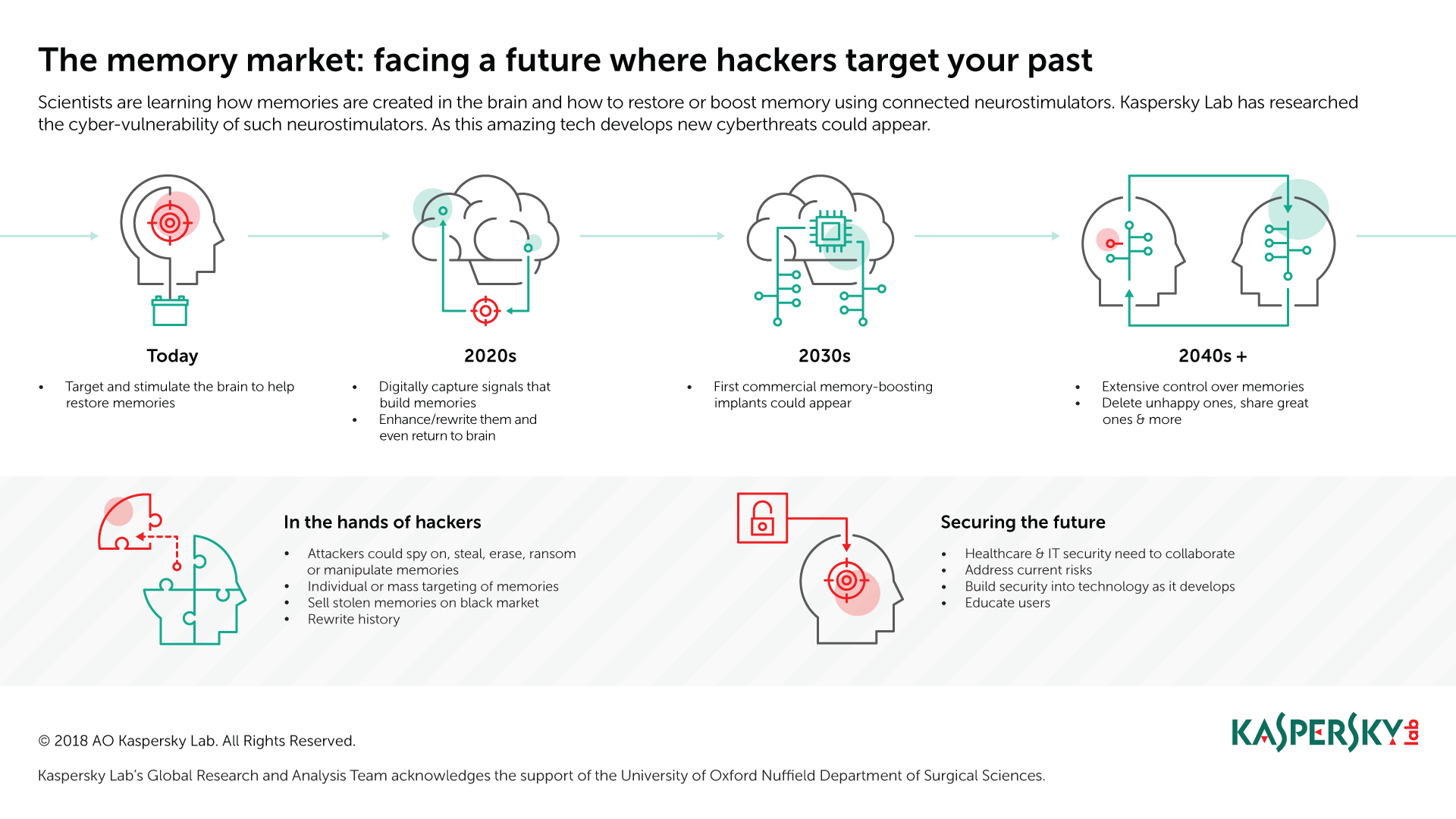 Current vulnerabilities matter because the technology that exists today is the foundation for what will exist in the future. Although no attacks targeting neurostimulators have been observed in the wild – a fact that is not altogether surprising since the numbers currently in use worldwide are low, and many are implemented in controlled research settings, several points of weakness exist that will not be hard to exploit.

Many of the potential vulnerabilities could be reduced or even eliminated by appropriate security education for clinical care teams and patients. But healthcare professionals, the security industry, the developers and manufacturers of devices and associated professional bodies all have a role to play in ensuring emerging devices are secure. We believe that collaborating to understand and address emerging risks and vulnerabilities, and doing so now while this technology is still relatively new, will pay off in the future.

“The Memory Market: Preparing for a future where cyberthreats target your past” full report (PDF)