The confusion surrounding Gaza Cybergang’s activities, separation of roles and campaigns has been prevalent in the cyber community. For a while, the gang’s activities seemed scattered, involving different tools and methods, and different malware and infection stages, although there was an alignment in its goals…

During our 2018 monitoring of this group, we were able to identify different techniques utilized by very similar attackers in the MENA region, sometimes on the same target. The findings led to us distinguishing between three attack groups operating within Gaza Cybergang:

The groups use different styles and, in some cases, techniques, but deploy common tools and commands after initial infection. The three attack groups were identified sharing victims. For example, Group1 would deploy a script to infect a specific victim with malware belonging to Group2, or similarly between Group2 and Group3.

More information on previous Desert Falcons (Group2) and Operation Parliament (Group3) activities can be found below:

Additional findings on Gaza Cybergang Group2 and Group3 will be presented in future publications. For more information, please contact: intelreports@kaspersky.com

Gaza Cybergang Group1, described in this post, is the least sophisticated of the three attack groups and relies heavily on the use of paste sites (with the operation name SneakyPastes) in order to gradually sneak a remote access Trojan (RAT) or multiple, onto victim systems. The group has been seen employing phishing, with several chained stages to evade detection and extend command and control server lifetimes. The most popular targets of SneakyPastes are embassies, government entities, education, media outlets, journalists, activists, political parties or personnel, healthcare and banking.

In this post, we’ll take a closer look at Gaza Cybergang Group1, including:

Through our continuous monitoring of threats during 2018, we observed a new wave of attacks by Gaza Cybergang Group1 targeting embassies and political personnel. Gaza Cybergang Group1 is an attack group with limited infrastructure and an open-source type of toolset, which conducts widespread attacks, but is nevertheless focused on Palestinian political problems. The attackers rely a lot on chained attack stages to evade quick detection and hide the communication infrastructure.

After an analysis of the samples, and through collaboration efforts with law enforcement agencies, we were able to uncover the full cycle of the intrusions that spread across the majority of the cyber kill chain, including but not limited to the toolset used, TTPs, infrastructure, action on objectives and the victimology. These efforts have led to the takedown of a large portion of the related infrastructure.

In this campaign, Gaza Cybergang used disposable emails and domains as the phishing platform to target the victims. Then pastebin.com, github.com, mailimg.com, upload.cat, dev-point.com and pomf.cat were used as channels for the different malware stages before achieving a full RAT implementation, which then communicates with the corresponding C2 server.

We have identified several implants that leveraged PowerShell, VBS, JS, and dotnet for resilience and persistence. The final stage, however, is a dotnet application that takes several commands such as directory listing, screenshot, compress, upload, etc. It then creates random long string folder names in temp directories to host the collected files per category before compressing, encrypting and uploading to the C2 server.

The threat actor seemed able to spread attacks widely, but only deployed additional tools and data collection functions in specific cases, as though they had a target list or a filter for targeted victims. Phishing emails with political themes were used in the majority of the observed attack emails. These were necessary to lure the intended type of victims – people involved in politics. 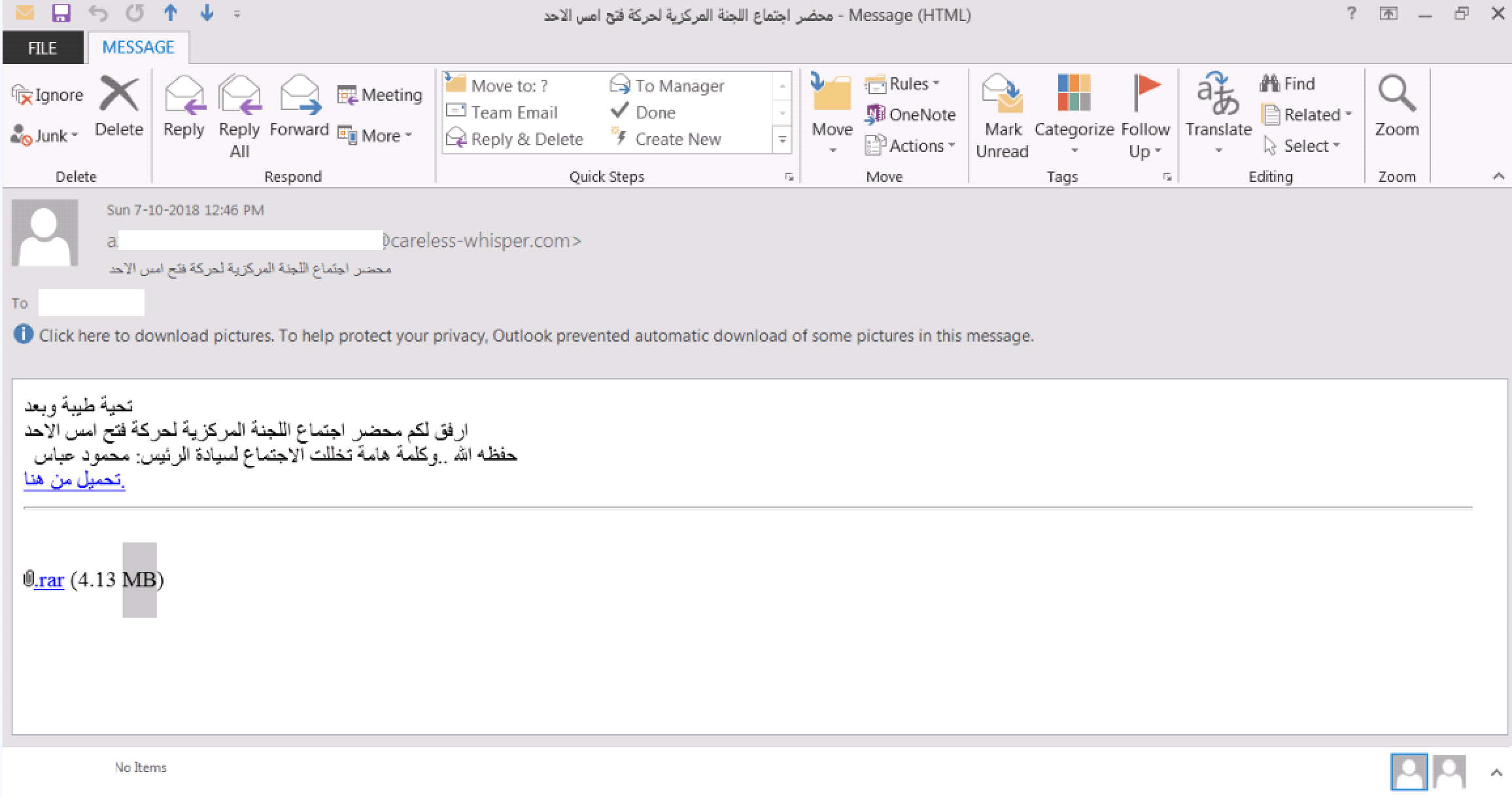 If the user clicks on the link, he will be prompted to download a RAR file that contains the stage 1 malware/lure, which he will execute afterwards.

The diagram below displays at a high level the steps taken by typical Gaza Cybergang Group1 lure samples. While different samples may use different methods to infect (i.e. invoke PowerShell, VBS, .NET app downloader, etc.), they generally stick to the same scenario of a persistent RAT that steals data and uploads it to the C2 server despite the different hard-coded domains. 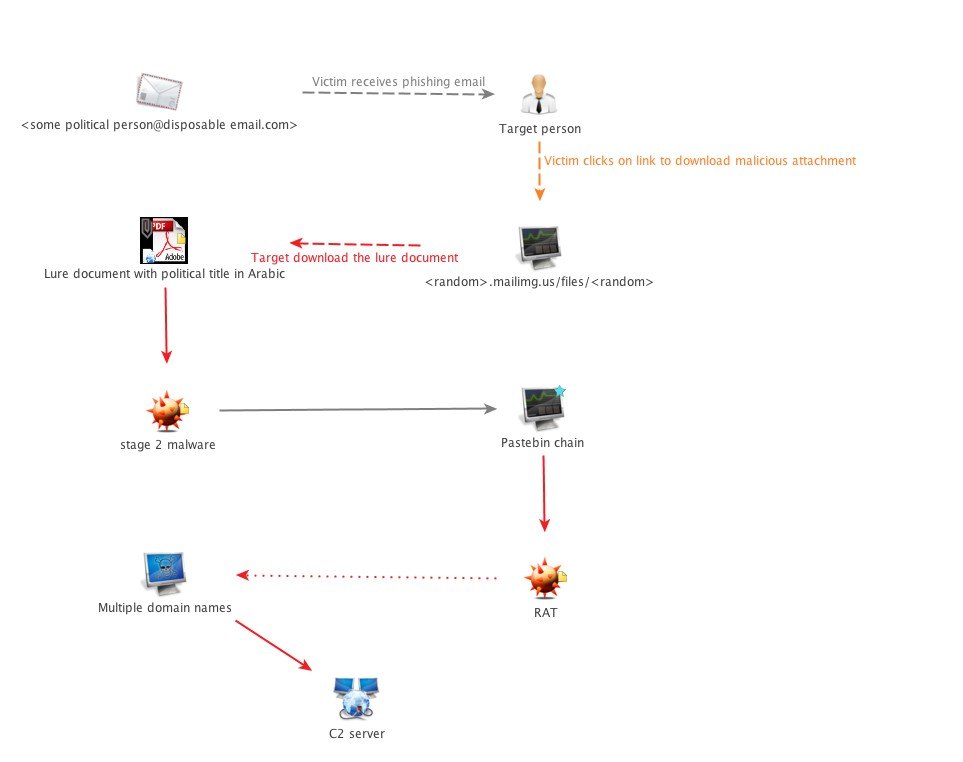 This sample ZIP file, which is similar to many other stage 1 downloaders in this campaign, contains an executable that is a compiled AutoIt script and which embeds some interesting functions (listed in the table below). The executable attempts to download a couple of files from different sources and saves them in the AppData and Startup folders for persistence, then invokes the first downloaded file – Picture2.exe.

After analyzing the files downloaded from the above first stage malware, it was clear that the threat actor wanted to achieve stable persistence on the victim machine, and also used more than one technique to exfiltrate data. The analyzed samples had a lot of similarities in terms of the code used and especially in the persistence techniques.

All the stages’ executables are created as chains to avoid detection and protect the C2 server. They consist mainly of persistence mechanisms and simple instructions despite their different forms (VBS scripts, PowerShell scripts, known software with open source code that can be backdoored, and in-house built dotnet apps). The RAT, however, had a multitude of functionalities (as listed in the table below) such as to download and execute, compress, encrypt, upload, search directories, etc. The threat actor’s main objective for using this RAT (known as Razy/NeD worm/Wonder Botnet) was obvious from the victim data that was collected – it was to search for specific file extensions such as PDF, DOC, DOCX, XLS, and XLSX, where they are compressed in RAR files per category, stored in temp directories within a folder named by victim ID (bot ID – long MD5 string), encrypted and uploaded to the C2.

In 2018, the threat actor mostly relied on a single C2 server (192.169.7.250) and rotated a multitude of domain names over a period of time. However, the attacks different stages were hosted on a variety of free sites such as Mailimg, Github, Pastebin, dev-point.co, a.pomf.cat, and upload.cat.

The phishing email infrastructure though relied on disposable email providers such as bit-degree.com, mail4gmail.com, careless-whisper.com and others.

Based on the analyzed metrics, the victims were spread across 39 countries and reached 240+ unique victims. The Palestinian Territories host the majority of the victims, followed by Jordan, Israel, then Lebanon, as noted in the below table.

While Gaza Cybergang Group1 described in this post looks like a low sophistication group, with limited infrastructure and attack files that can be found in the wild, they are the most relentless in their attacks, with continuous targeting and high malleability. This has allowed the group to achieve reasonable success against a relatively wide array of victims.

Gaza Cybergang is evolving and adapting to the MENA region – a complex setting with complex requirements. The attacks are now divided into three groups with different levels of sophistication and different levels of targeting. We expect the damage caused by these groups to intensify and the attacks to extend into other regions that are also linked to the complicated Palestinian situation. The attackers also seem to be within reach of more advanced tools, techniques and procedures, and we expect them to rely more on these in future attacks. More information on Desert Falcons (Group2) and Operation Parliament (Group3) will be presented in future publications.