As already mentioned in the previous blog post about Flame, the volume of its code and functionality are so great that it will take several months for a complete analysis. We’re planning on continually disclosing in our publications the most important and interesting details of its functionality as we reveal them.

At the moment we are receiving many inquiries about how to check systems for a Flame infection. Of course the simplest answer, for us, is to advise to use Kaspersky Lab Antivirus or Internet Security. We successfully detect and delete all possible modifications of the main module and extra components of Flame.

However, for those who want to carry out a detailed check themselves, at the end of this article we will give the necessary recommendations and advice.

The main module of Flame is a DLL file called mssecmgr.ocx. We’ve discovered two modifications of this module. Most of the infected machines contained its “big” version, 6 Mb in size, and carrying and deploying additional modules. The smaller version’s size is only 900 Kb and contains no additional modules. After installation, the small module connects to one of the C&C servers and tries to download and install the remaining components from there.

Mssecmgr may be called different names on actual infected machines, depending on the method of infection and the current internal state of the malware (installation, replication, upgrade), e.g., wavesup3.drv, ~zff042.ocx, msdclr64.ocx, etc.

Complete analysis of the mssecmgr module will follow in our upcoming blog posts.

The first activation of this file is initiated by one of the external features – either Windows WMI tools using a MOF file if the MS10-061 exploit is used, or using a BAT file:

When activated, mssecmgr registers itself as a custom authentication package in the Windows registry:

On the next system boot, the module is loaded automatically by the operating system.

After updating the Windows registry, mssecmgr extracts any additional modules that are present in its encrypted and compressed resource section (resource “146”) and installs them. The resource is a dictionary that contains configuration options for mssecmgr and other modules, the modules themselves (DLL files), and parameters that need to be passed to these modules to load them properly, i.e., decryption keys.

We are analyzing the additional modules and will provide more information about their functionality in coming blog posts.

When installation is completed, mssecmgr loads available modules and starts several execution threads that implement a channel to the C&C servers and Lua interpreter host, and other features – depending on the configuration. The functionality of the module is separated into different “units” that have different namespaces in the configuration resource and have distinct names in log messages, which are extensively used throughout the code. 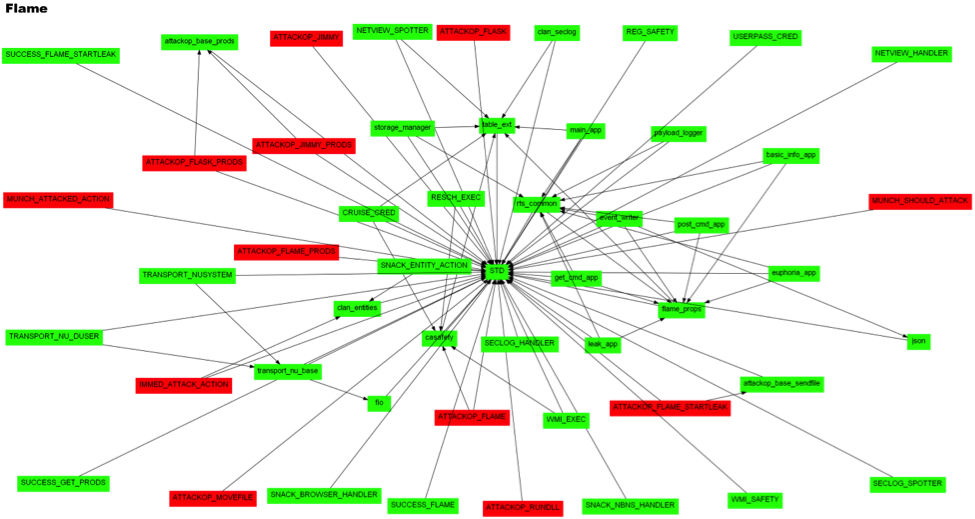 Here is a brief overview of the available units. The names were extracted from the binary and the 146 resource.

Additional modules are installed in the %windir%system32 directory:

Additional modules downloaded from the C&C servers are installed in the same directory.

The modules of the Flame malware produce a lot of data files that contain extensive execution logs, plus the collected information – screenshots, lists of processes, hardware listings, etc.

The files are saved in the %windir%temp directory using following names:

There are also optional files that can be found in the %windir%system32 directory:

Flame stores its persistent data in files using different formats. All data is encrypted using several algorithms and keys. Some of the files are databases created using a built-in SQLite3 library. These databases contain data produced by both data stealing and replication routines. We will provide more information about these files in later publications.

The directory names used by the additional components of Flame may differ slightly depending on the type of installation and the configuration options from resource 146:

These directories may contain the following files:

Flame can also produce or download files with the following names:

As a consequence, we can provide a method for a quick “manual” check of your systems for presence of a Flame infection:

1. Perform a search for the file ~DEB93D.tmp. Its presence on a system means that it either is or has been infected by Flame.

2. Check the registry key HKLM_SYSTEMCurrentControlSetControlLsa
Authentication Packages.
If you find mssecmgr.ocx or authpack.ocx in there – you are infected with Flame.

3. Check for the presence of the following catalogs. If present – you’re infected.

4. Conduct a search for the rest of the filenames given above. All of them are quite unique and their being discovered would mean that there is a strong possibility of an infection with Flame.

P.S. We have checked the information as suggested in the comments at our blogpost regarding a possible relation to FLAME (Flexible Lightweight Active Measurement Environment) software from Brazil.

Interestingly, the name picked by us fully matches that software, which also uses LUA for implementing business logics. The FLAME software is used to measure network characteristics by deploying measurement agents and collecting data in a central database. Despite some similarities, we think that this software is unrelated as it serves different objectives. Besides the LUA engine, the core of communication in FLAME is XMPP protocol, which is not used in the Flame malware.

The authors might have been inspired by the FLAME project and re-implemented similar architecture – only for the different goal, or this is all just a coincidence. We don’t have any other reason to think that it is somehow related to the Flame malware.