The science of spying on scientists

In 2009, an international scientific conference was held in Houston, USA. Leading scientists from several countries were invited to attend. As is traditional for such events, the organizers sent out a post-meeting CDROM containing a presentation with the best photos from the event. It is unlikely that any of the recipients expected that while they were enjoying the beautiful pictures and memories a nation-state sponsored Trojan Horse was activating silently in the background. 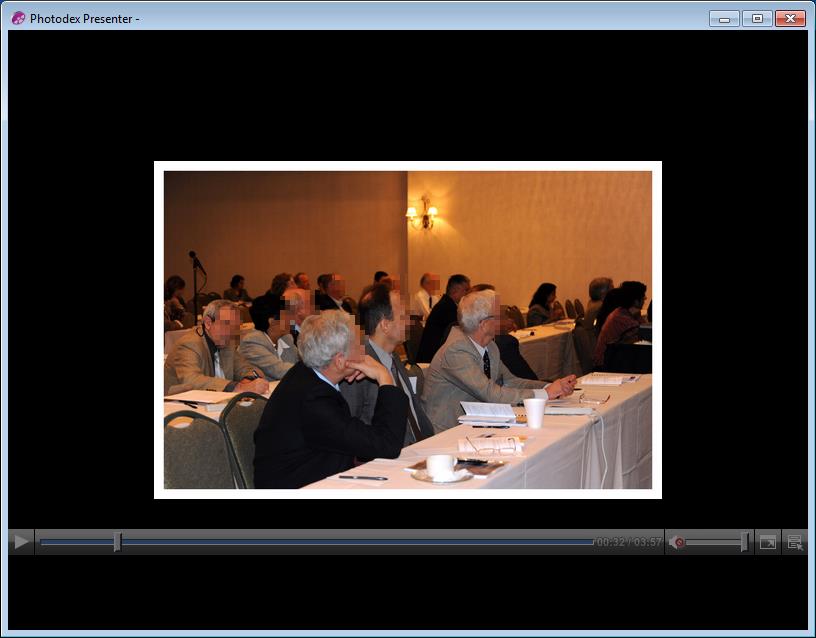 Photo slideshow played from the CD

Interestingly, it looks as if most of the attendees brought pens and paper instead of laptops.

The disk contains two files in the root folder, an autorun.inf and autorun.exe. This is typical of many CDROMs. The autorun.inf simply executes the main EXE from root.  Here’s what it looks like:

More interesting is the autorun.exe binary, which has the following attributes:

Considering the date the CDROM was shipped, it means that two of the exploits were zero-days. It’s notable that the code attempts different variants of kernel exploits, and does so in a loop, one by one, until one of them succeeds. The exploit set from the sample on the CDROM includes only three exploits, but this exploitation package supports the running of up to 10 different exploits, one after another. It’s not clear whether this means that there is also a malware with 10 EoP exploits in it, or whether it’s just a logical limitation.

The code has separate payloads for Windows NT 4.0, 2000, XP, Vista and Windows 2008, including variations for certain service pack versions. In fact, it runs twice: firstly, to temporarily elevate privileges, then to add the current user to the local administrators group on the machine, for privilege elevation persistence.

If these actions are successful, the module starts another executable from the disk, rendering the photo slideshow with pictures from the Houston conference.

At the end, just before exiting, the code runs an additional procedure that does some special tests. If the date of execution fell before 1 July 2010 and it detects no presence of Bitdefender Total Security 2009/2010 or any Comodo products, it loads an additional DLL file from the disk named “show.dll”, waits for seven seconds, unloads the DLL and exits.

If the date fell after 1 July 2010, or any of the above products are installed, it drops execution immediately.

The main loader and privilege escalation tool, “autorun.exe” fires up a special dropper, which is actually an Equation Group DoubleFantasy implant installer. The installer is stored as “show.dll” in the “Presentation” folder of the CDROM.

The DLL file has the following attributes:

First it locates data in the resource section, unpacks (UCL) and XOR-decrypts configuration data from one of the resources.

Next it creates the following registry keys:

It also attempts to self-delete on the next reboot, which fails if it’s started from the CD.

The installer checks for security software using a list of registry keys and values stored in the resource section. The keys are checked in quite a delicate “non-alarming” way using key enumeration instead of direct key access. List of top level keys checked:

The mark will be in the form of {CE0F7387-0BB5-E60B-xxxx-xxxxxxxxxxxx} for the (Default) value data and will then exit.

If no security software is identified, it will unpack (UCL) and XOR-decrypt the main payload, which is extracted into %system%\ee.dll.

Remarkably, it loads the DLL using its own custom loader instead of using standard system LoadLibrary API call.

The module looks as if it was built using a set of components or libraries that perform:

This library code supports Win9x and the Windows NT family from NT4.0 to NT6.x. It should be mentioned that these libraries are not very well merged together. For instance, some parts of the code are unused.

Here’s what the DoubleFantasy decoded configuration block looks like:

The DoubleFantasy malware copied into the victim’s machine has the following properties:

It should be noted that both the installer and the malware appear to have been compiled several months before “autorun.exe” from the CDROM, suggesting that they are more or less generic implants. It also suggests that the “autorun.exe” was probably compiled specially for the CDROM-based attack.

In fact, there are several known versions of the DoubleFantasy payload. The disk from Houston used version 8.2.0.3; while other versions were mostly delivered using web-exploits.

Interestingly, the most popular versions are 8 and 12: 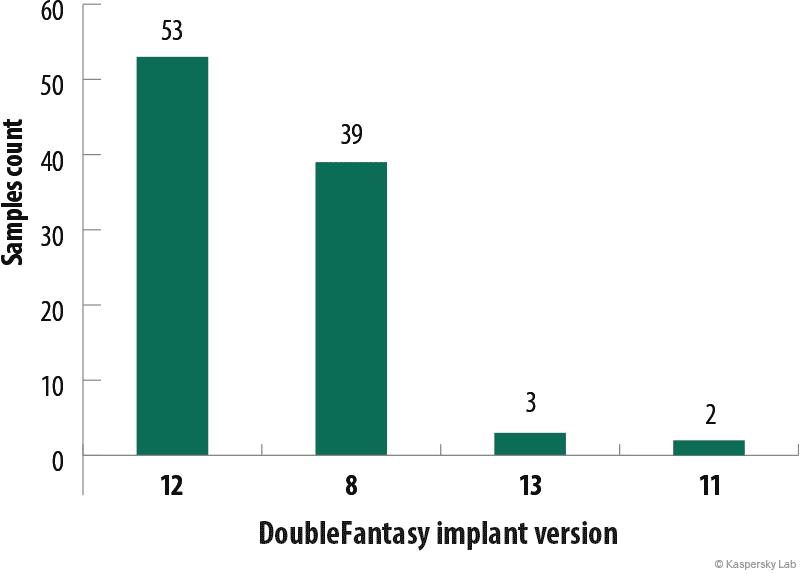 This module uses a technique known as DLL COM hijacking which provides a capability to load the code in different processes.

First of all, it checks if the running module is named “ee.dll” and, if so, will undertake the final installation steps:

If there is an initialization error, if the hosting process is “explorer.exe” or “avp.exe”, it supresses any exceptions and continues execution. This could indicate that if there were any errors in these processes they must not be shut down because of them.

To correctly hijack the replaced COM objects, the code exports a set of functions bound to original DLL files.

The following commands are supported by the backdoor:

The implementation of version 12.2 is similar to version 8.2, although it is twice the size due to the addition of a big new library.

The main purpose of this new library to steal user names and passwords from:

In addition to browsers, the library can also inject malicious code and read the memory of other processes in order to obtain and decrypt users’ passwords. The same library is also used inside the main EQUATIONDRUG orchestrator and TRIPLEFANTASY modules.

The library gathers stolen credentials and then probes them when accessing proxy server while connecting to the Internet, and, if a probe was successful, the valid credentials are encrypted with RC6 and encoded with BASE64 to be used later.

The stolen user data is stored in the Windows registry as @WriteHeader value, inside two random keys in the   HKLM\SOFTWARE\Classes\CLSID\{77032DAA-B7F2-101B-A1F0-01C29183BCA1}\Containers node

The disk used in the Houston attack represents a rare and unusual operation for the Equation Group. We presume that such attacks were crafted only for important victims who couldn’t otherwise be reached, for instance, through a web-based attack vector. This is confirmed by the fact that the exploitation library had three exploits inside, two of which were zero-days at the time.

The DoubleFantasy Malware is usually the first step in the infection of a victim by the Equation Group. Once the victim has been confirmed by communicating with the backdoor and checking various system parameters, a more sophisticated malware system is deployed, such as EquationDrug or Grayfish. 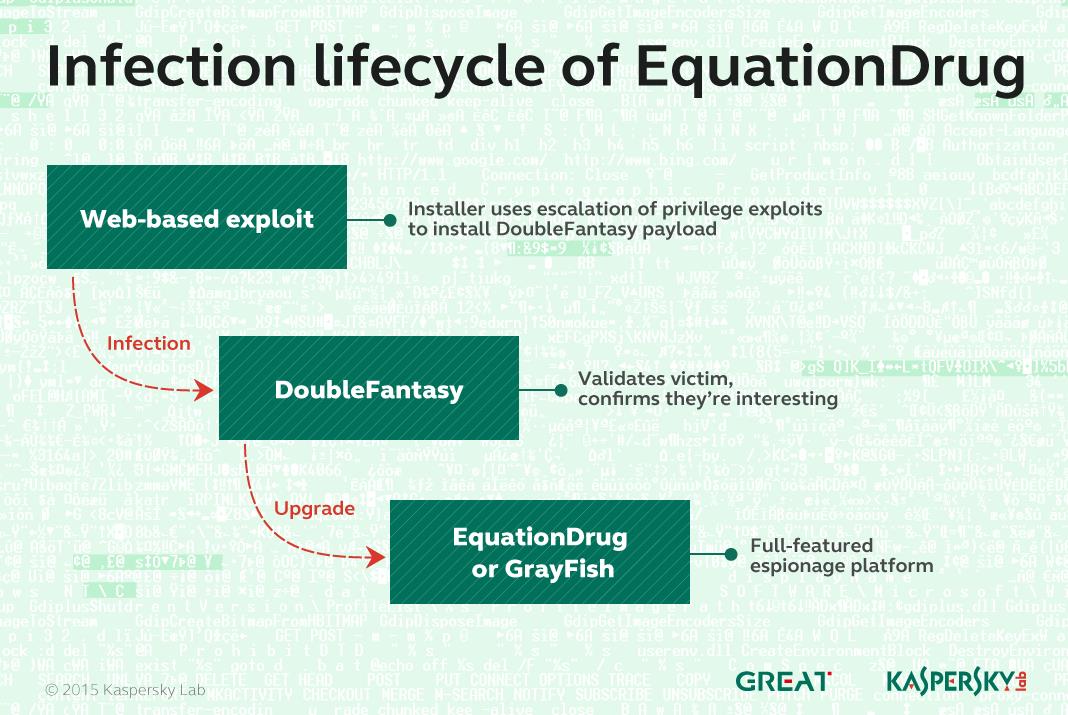 During the upcoming blogposts, we will continue to describe the more sophisticated malware families used by the Equation Group: EquationDrug and GrayFish.

Equation Group: from Houston with love