DTrack allows criminals to upload, download, start or delete files on the victim host. Among those downloaded and executed files already spotted in the standard DTrack toolset there is a keylogger, a screenshot maker and a module for gathering victim system information. With a toolset like this, criminals can implement lateral movement into the victims’ infrastructure in order to, for example, retrieve compromising information.

DTrack itself hasn’t changed much over the course of time. Nevertheless, there are some interesting modifications that we want to highlight in this blogpost. Dtrack hides itself inside an executable that looks like a legitimate program, and there are several stages of decryption before the malware payload starts.

DTrack unpacks the malware in several stages. The second stage is stored inside the malware PE file. To get it, there are two approaches: 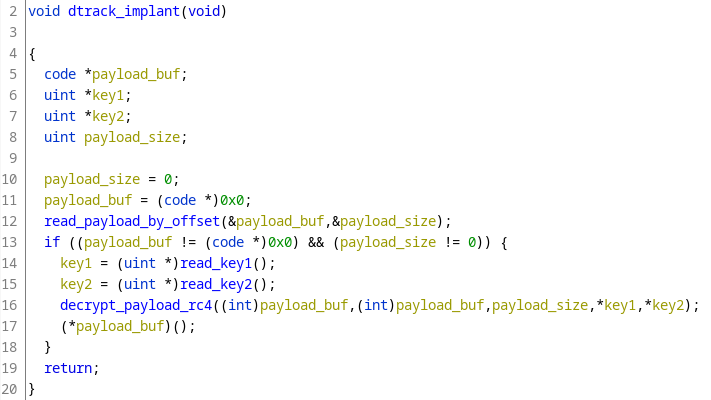 After retrieving the location of the next stage and its key, the malware then decrypts the buffer (with a modified RC4 algorithm) and passes control to it. To figure out the offset of the payload, its size and decryption keys, DTrack has a special binary (we have dubbed it ‘Decrypt config’) structure hidden in an inconspicuous part of the PE file.

The second stage payload consists of heavily obfuscated shellcode as can be seen below. 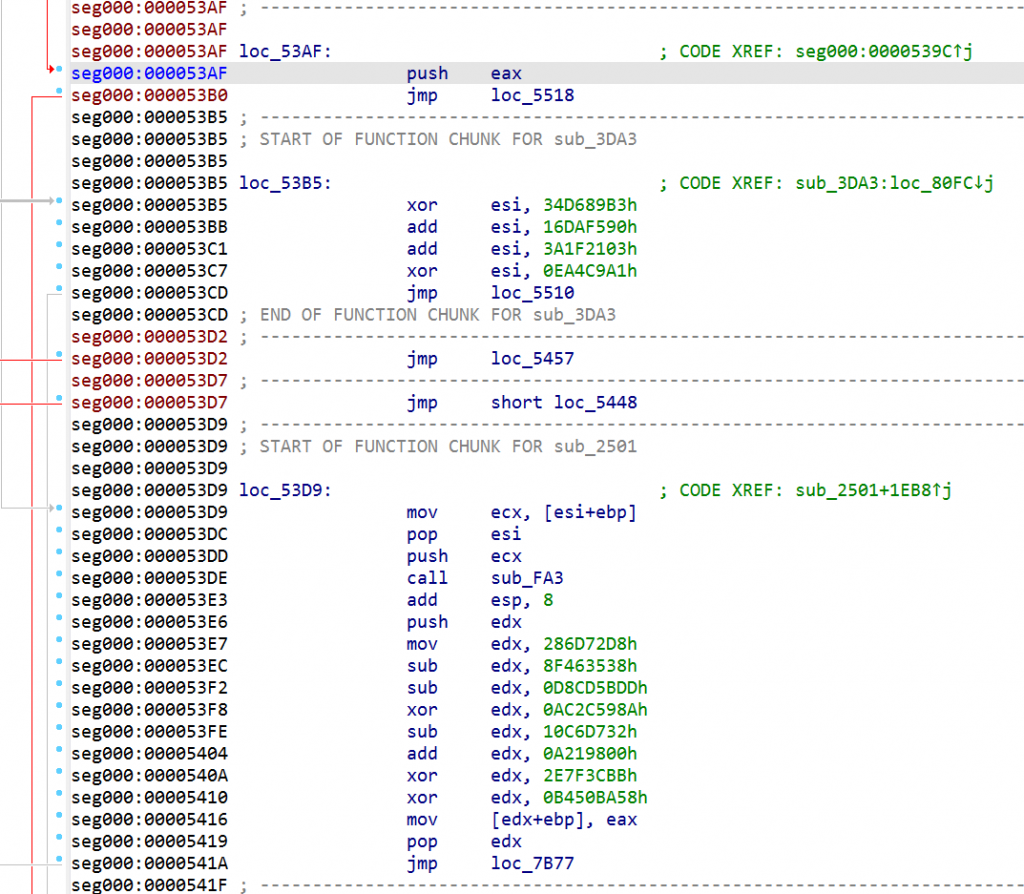 The encryption method used by the second layer differs for each sample. So far, we have spotted modified versions of RC4, RC5 and RC6 algorithms. The values of the third stage payload and its decryption key are obtained by reading Decrypt config again.

One new aspect of the recent DTrack variants is that the third stage payload is not necessarily the final payload; there may be another piece of binary data consisting of a binary configuration and at least one shellcode, which in turn decrypts and executes the final payload.

Once the final payload (a DLL) is decrypted, it is loaded using process hollowing into explorer.exe. In previous DTrack samples the libraries to be loaded were obfuscated strings. In more recent versions they use API hashing to load the proper libraries and functions. Another small change is that three C2 servers are used instead of six. The rest of the payload’s functionality remains the same.

When we look at the domain names used for C2 servers, a pattern can be seen in some cases. For example, the actors combine a color with the name of an animal (e.g., pinkgoat, purplebear, salmonrabbit). Some of the peculiar names used in the DTrack infrastructure can be found below:

According to KSN telemetry, we have detected DTrack activity in Germany, Brazil, India, Italy, Mexico, Switzerland, Saudi Arabia, Turkey and the United States, indicating that DTrack is spreading into more parts of the world. The targeted sectors are education, chemical manufacturing, governmental research centers and policy institutes, IT service providers, utility providers and telecommunications.

The DTrack backdoor continues to be used actively by the Lazarus group. Modifications in the way the malware is packed show that Lazarus still sees DTrack as an important asset. Despite this, Lazarus has not changed the backdoor much since 2019, when it was initially discovered. When the victimology is analyzed, it becomes clear that operations have expanded to Europe and Latin America, a trend we’re seeing more and more often.