State-sponsored threat actors and sophisticated attacks are often in the spotlight. Indeed, their innovative techniques, advanced malware platforms and 0-day exploit chains capture our collective imagination. Yet these groups still aren’t likely to be a part of the risk model at most companies, nor should they be. Businesses today are faced with an array of much more immediate threats, from ransomware and customer information leaks, to competitors engaging in unethical business practices. In this blog post, we’ll be focusing on DeathStalker: a unique threat group that appears to target law firms and companies in the financial sector (although we’ve occasionally seen them in other verticals as well). As far as we can tell, this actor isn’t motivated by financial gain. They don’t deploy ransomware, steal payment information to resell it, or engage in any type of activity commonly associated with the cybercrime underworld. Their interest in gathering sensitive business information leads us to believe that DeathStalker is a group of mercenaries offering hacking-for-hire services, or acting as some sort of information broker in financial circles.

DeathStalker first came to our attention through a PowerShell-based implant called Powersing. By unraveling this thread, we were able to identify activities dating back to 2018, and possibly even 2012. But before we dive into a history of DeathStalker and possible links to known groups, we’ll start with a bit of background, beginning with this actor’s current arsenal.

Despite looking like documents from the Explorer or popular archive-extraction products, the shortcuts lead to cmd.exe. These shortcut files have the following structure:

Clicking them initiates a convoluted sequence resulting in the execution of arbitrary code on the victim’s machine. A short PowerShell script, passed through cmd.exe’s arguments, bootstraps the following chain:

Communications with the C&C server involve the exchange of JSON-encoded objects. Powersing only has two tasks:

On stages 1 and 2, security software evasion is carried out with a high degree of variation across the different samples we’ve analyzed. Depending on the AV detected on the machine, Powersing may opt for alternative persistence methods, or even stop running entirely. We suspect that the group behind this toolset performs detection tests before each of their campaigns and updates their scripts based on the results. This indicates an iterative and fast-paced approach to software design. It’s worth pointing out that stage 2 actively looks for traces of virtualization (for example, vendor specific MAC addresses) and malware analysis tools on the machine, and reports this information to the C&C server.

To wrap up this section, we’d like to mention that Powersing isn’t a monolithic malware platform. Instead, it’s a stealthy foothold inside the victim’s network with its key role to enable the projection of further tools.

The DeathStalkers toolchain leverages a number of public services as dead drop resolvers. These services provide a way for attackers to store data at a fixed URL through public posts, comments, user profiles, content descriptions, etc. Messages left by the attackers follow the following patterns: “My keyboard doesn’t work… [string].” and “Yo bro I sing [Base64 encoded string] yeah”.

During our investigation of this threat actor, we discovered such messages on:

In all likelihood, this list isn’t exhaustive. A number of these messages can be discovered through simple Google queries. Powersing’s first order of business is to connect to any dead drop resolver it knows to retrieve this information. Stage 1 consumes the first string of these messages, which contains the AES key used to decode stage 2. Then stage 2 connects to the dead drop resolver to obtain the integer encoded in the second string. As the code excerpt below shows, this integer is divided by an arbitrary constant (which varies depending on the sample) before being converted to an IP address:

This IP address is then stored on the user’s hard drive and used to establish a connection to the real C&C server used by the operators to control Powersing. Relying on well-known public services allows cybercriminals to blend initial backdoor communications into legitimate network traffic. It also limits what defenders can do to hinder their operations, as these platforms can’t generally be blocklisted at the company level, and getting content taken down from them can be a difficult and lengthy process. However, this comes at a price: the internet never forgets, and it’s also difficult for cybercriminals to remove traces of their operations. Thanks to the data indexed or archived by search engines, we estimate that Powersing was first used around August 2017.

A final detail we’d like to mention is that a number of Powersing C&Cs we discovered had SSL certificates reminiscent of Sofacy’s infamous Chopstick C&C “IT Department” certificates. We’re confident this infrastructure isn’t linked with Sofacy and believe this is an attempt by the threat actor to lead defenders to erroneous conclusions.

Sec0wn’s original blog post introducing Powersing hinted at possible links with a malware family called Janicab, whose older samples date back to 2012. However, to the best of our knowledge, this connection was never explored publicly. Ultimately, we obtained one of the malware samples listed by F-Secure in a 2015 blog post (1fe4c500c9f0f7630a6037e2de6580e9) on Janicab to look for similarities.

This file is another LNK pointing to cmd.exe that drops a VBE script on the system when clicked, as well as a decoy document. The script establishes a connection to an unlisted YouTube video to obtain C&C information embedded in the description:

The integer obtained on this page is then divided by a constant before being converted to an IP address:

While the use of YouTube as a dead drop resolver alone wouldn’t be sufficient to establish a link between the two groups, we feel that the process of obtaining an integer somewhere online and dividing it before interpreting it as an IP address is unique enough to draw a first connection.

Janicab’s features also remind us of Powersing’s: the sample contains VM detection based on the MAC address of the machine, looks for malware analysis programs and has familiar antivirus software evasion routines. Janicab also periodically sends screenshot captures of the victim’s desktop to the C&C and appears to enable the execution of arbitrary Python scripts.

In addition, this sample contains the exact same list of denylisted VM MAC addresses as the Powersing sample introduced earlier in this post, in the same order.

Another possible connection worth investigating concerns the more recent Evilnum malware family, which was the subject of an in-depth blog post from ESET last July, as well as a couple of our own private reports. ESET’s post details another LNK-based infection chain leading to the execution of Javascript-based malware. Again, we obtained an old Evilnum sample (219dedb53da6b1dce0d6c071af59b45c) and observed that it also obtained C&C information from a dead drop resolver (GitHub) to obtain an IP address converted with the following code:

We can’t help but notice the pattern of looking for a specific string using a regular expression to obtain an integer, then dividing this integer by a constant resulting in the IP address of the C&C server. While Evilnum provides more capabilities than Powersing, it can also capture screenshots and send them to the C&C server.

In terms of victimology, Evilnum focuses on companies in the Fintech sector. It appears to be more interested in business intelligence than financial gain. This is consistent with the DeathStalker activity we’ve observed thus far.

One final connection we want to mention is that recent Evilnum (835d94b0490831da27d9bf4e9f4b429c) and Janicab samples have some slight code overlaps, despite being written in different languages:

We feel that these names are unique enough to create an additional link between the two malware families. Less conclusively, this Evilnum sample also contains a function called “long2ip” to convert integers to IP addresses, while Powersing contains a similar implementation under the “LongToIP” name.

While none of these points on their own are sufficient in our eyes to draw a conclusion, we feel that together they allow us to assess with medium confidence that Powersing, Evilnum and Janicab are operated by the same group. Additional data shared with us by industry partners that we can’t disclose at the moment also supports this conclusion.

DeathStalker primarily targets private entities in the financial sector, including law offices, wealth consultancy firms, financial technology companies, and so on. In one unique instance, we also observed DeathStalker attacking a diplomatic entity. 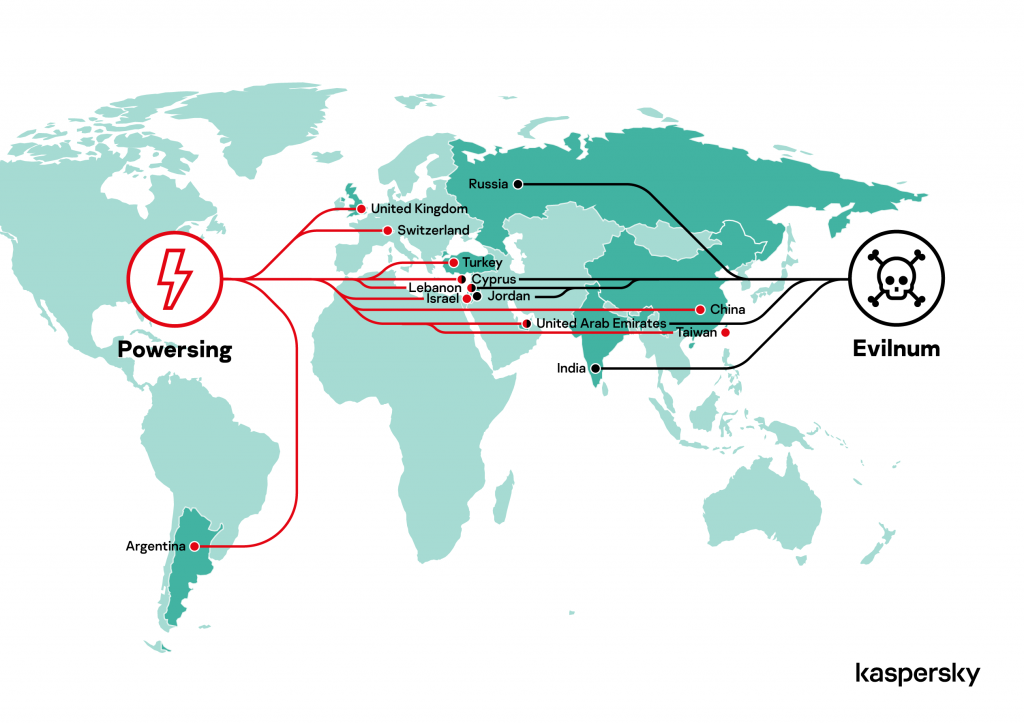 However, we believe that DeathStalkers chooses its targets purely based on their perceived value, or perhaps following customer requests. In this context, we assess that any company in the financial sector could catch DeathStalker’s attention, no matter its geographic location.

In this blog post, we described a modern infection chain that’s still actively used and developed by a threat actor today. It doesn’t contain any innovative tricks or sophisticated methods, and certain components of the chain may actually appear needlessly convoluted. Yet if the hypothesis is correct that the same group operates Janicab and Powersing, it indicates that they’ve been leveraging the same methodologies since 2012. In the infosec world, it doesn’t get more “tried and true” than this.

Based on the limited technological means either of these toolchains display, we believe they’re good examples of what small groups or even skilled individuals can create. The value we see in publicly releasing information about DeathStalker is to have this threat actor serve as a baseline of what the private sector should be able to defend against. Groups like DeathStalker represent the type of cyberthreat most companies today are likely to face more than state-sponsored APTs. Due to its ongoing operations (DeathStalker notably leveraged COVID-19 for both Janicab and Powersing implant deployment since March 2020) and continuous activity since 2018, we believe that DeathStalker is still developing its toolset, and that we’ll have more to report on in the near future.

We advise defenders to pay close attention to any process creation related to native Windows interpreters for scripting languages, such as powershell.exe and cscript.exe. Wherever possible, these utilities should be made unavailable. We also recommend that future awareness trainings and security product assessments include infection chains based on LNK files.

For more information about both DeathStalker and Evilnum activity, subscribe to our private reporting services: intelreports@kaspersky.com

Lifting the veil on DeathStalker, a mercenary triumvirate