Modification of the hard drive areas responsible for the initial loading of the system has become increasing popular with cybercriminals. Moreover, cybercriminals have now moved on from just modifying the MBR (master boot record) to infecting the code of the NTFS loader.

We recently discovered an interesting piece of malware — Cidox. It is peculiar in that it infects the load area code of the boot partition on the hard drive.

The master file Trojan-Dropper.Win32.Cidox “carries on board” two driver rootkits (Rootkit.Win32/Win64.Cidox). One is compiled for 32-bit platforms, the other for 64-bit platforms.

The source component of Cidox makes the following modifications to the beginning of the hard drive:

Fragment of the initial domain of the hard drive infected by Cidox
(detected as Rootkit.Boot.Cidox)

The next time the system is booted the malicious code in the load area will be invoked. With the help of a known technique, use of the Int 13h interrupt and some Windows kernel features it successfully loads the malicious driver to the system. The loaded driver uses PsSetCreateProcessNotifyRoutine to control the launch of the following processes:

Fragment of Rootkit.Win32.Cidox containing strings with the names of controlled browsers

If the launch of one of the processes above is detected, one more Cidox component is integrated into it — a dynamic library (Trojan.Win32.Cidox). This library modifies any browser output, substituting it with its own. As a result, the user sees a browser window displaying an offer to renew the browser due to some malicious programs allegedly detected on the system. The example below tells the user to renew the browser due to infection by Trojan.Win32.Ddox.ci.

Fragment of a browser window on a system infected by Cidox

Of course, the user is asked to pay for the ‘renewal’. In order to obtain it, an SMS has to be sent to a short number.

A unique page design is used for each of the most popular browsers. 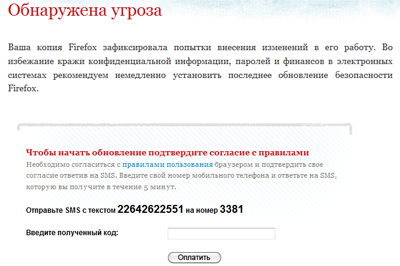 Fragment of a browser window on a system infected by Cidox

It should be noted that new versions of browsers can in fact be downloaded free of charge from the vendor’s website. Cybercriminals are merely scaring users in order to extort money from them.

Cybercriminals switch from MBR to NTFS