At the beginning of May 2014 a security researcher named Kaffeine made the first public mention of Trojan.AndroidOS.Koler.a, a ransomware program that blocks the screen of an infected device and requests a ransom of between $100 and $300 in order to unlock the device. It doesn’t encrypt any files or perform any kind of advanced blocking of the target device other than blocking the screen.

The malware displays a localized message from the police! 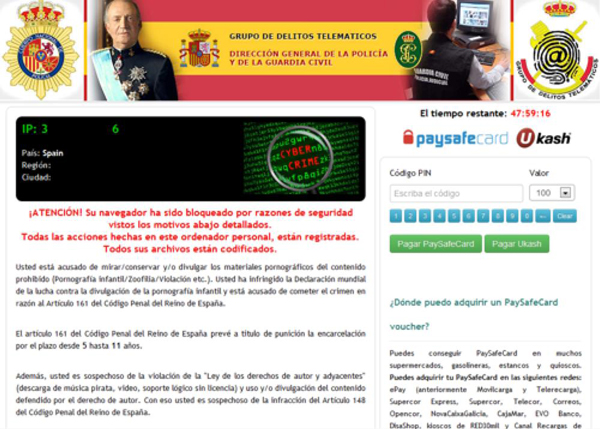 It has customized messages for the following countries:

As of July 23, the mobile part of the campaign has been disrupted and the Command and Control server has started sending an “Uninstall” request to victims.

The diagram below illustrates the bigger picture of the infrastructure used. 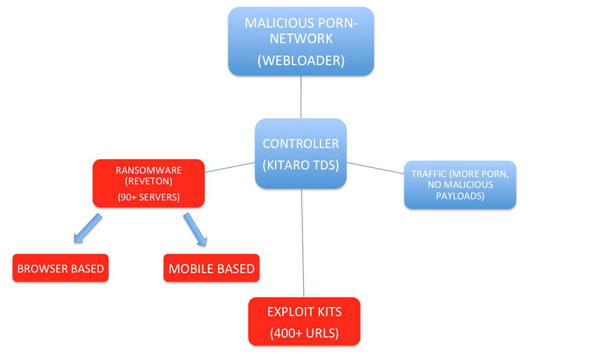 The main findings can be summarized as follows:

The use of a pornographic network for this “police” ransomware is no coincidence: the victims are more likely to feel guilty about browsing such content and pay the alleged fine from the authorities. This psychological factor can be the difference between a failed campaign and a successful one.

With regards to the malicious mobile application, we have found different APKs with the same behavior. Some of them (not yet distributed through this malicious network) have interesting names such as PronHub.com.Apk, whatsapp.apk or updateflash.apk.

This suggests the attackers could expand their campaign in the near future.

The mobile infection is triggered when the user visits specific pornographic sites from an Android device. Those sites are part of the distribution network created for this campaign and will redirect the victims to a landing page that contains an APK file called animalporn.apk.

When visited, the website automatically redirects the user to the malicious application. The user still has to confirm the download and installation of the application on their device.

We were able to obtain the statistics showing the geographical distribution of visitors to this malicious site:

According to the same stats, we see that the campaign started and reached peak activity in April 2014.

The pornographic sites of the network are not compromised sites. They all look the same, have the same HTML infrastructure and don´t provide their own pornographic material.

Almost all the websites used in this infrastructure were created using the same template – in many cases using templates from the legitimate site Tubewizardpro and Webloader for the external resources.

Videosartex.us then performs a redirect based on the parameter in the URL, the referrer, the user agent and the geographical location of the visitor’s IP.

If the IP belongs to any of the 30 affected countries and the user-agent belongs to an Android device, the visitor is redirected to the APK at video-porno-gratuit.eu.

During our analysis we noticed that some domains showed ransomware-themed pop-ups to non-mobile victims. These additional servers are used when the controller (videosartex) detects the following two conditions:

In this case, the victim is redirected to any of the browser ransomware websites, while a blocking screen identical to the one used for mobiles is displayed on the victim’s computer. There is no infection in this case, just a pop-up showing a blocking template.

The following images are examples of the headers used in the ransomware pop-ups:

The redirection infrastructure used in this campaign contained one final surprise; redirecting visitors using Internet Explorer to sites hosting the Angler exploit kit, which has exploits for Silverlight, Adobe Flash and Java.

The following is an example of such a redirection:

We detected more than 200 domains used for hosting this exploit kit.

During our analysis, the exploit code was not fully functional and it didn´t deliver any payload.

Ransomware for mobile devices appeared on almost every prediction list for 2014. We are not dealing with the most advanced families here such as cryptolocker for Windows. The ransomware is fairly basic, but sufficient to annoy the victim.

Of most interest is the distribution network used in the campaign. Dozens of automatically generated websites redirect traffic to a central hub where users are redirected again. Depending on a number of conditions, this second redirection could be to a malicious Android application, to browser-based ransomware or to a website with the Angler Exploit Kit.

We believe this infrastructure demonstrates just how well organized and dangerous these campaigns are that are currently targeting, but not limited to, Android users. The attackers can quickly create similar infrastructure thanks to full automation, changing the payload or targeting different users. The attackers have also thought up a number of ways for monetizing their campaign income in a truly multi-device scheme.

Behind the ‘AndroidOS.Koler’ distribution network