While some criminals blow up ATMs to steal cash, others use less destructive methods, such as infecting the ATM with malware and then stealing the money. We have written about this phenomenon extensively in the past and today we can add another family of malware to the list – Backdoor.Win32.ATMii.

ATMii was first brought to our attention in April 2017, when a partner from the financial industry shared some samples with us. The malware turned out to be fairly straightforward, consisting of only two modules: an injector module (exe.exe, 3fddbf20b41e335b6b1615536b8e1292) and the module to be injected (dll.dll, dc42ed8e1de55185c9240f33863a6aa4). To use this malware, criminals need direct access to the target ATM, either over the network or physically (e.g. over USB). ATMii, if it is successful, allows criminals to dispense all the cash from the ATM.

exe.exe – an injector and control module

The injector is an unprotected command line application, written in Visual C with a compilation timestamp: Fri Nov 01 14:33:23 2013 UTC. Since this compilation timestamp is from 4 years ago – and we do not think this threat could have gone unnoticed for 4 years – we believe it is a fake timestamp. What’s also interesting is the OS that is supported by the malware: One more recent than Windows XP. We can see this in the image below, where the first argument for the OpenProcess() function is 0x1FFFFu.

It is the PROCESS_ALL_ACCESS constant, but this constant value differs in older Windows versions such as Windows XP (see the picture below). This is interesting because most ATMs still run on Windows XP, which is thus not supported by the malware.

The injector, which targets the atmapp.exe (proprietary ATM software) process, is fairly poorly written, since it depends on several parameters. If none are given, the application catches an exception. The parameters are pretty self-explanatory:

The application searches for a process with the name atmapp.exe and injects code into it that loads the “dll.dll” library (which has to be in the same folder as the exe.exe file). After it has been loaded it calls the DLLmain function.

As the name already suggests, it is the opposite of the /load parameter; it unloads the injected module and restores the process to its original state.

The application creates/updates C:\ATM\c.ini which is used by the injected DLL to read commands. The file is updated each time the .exe is run with the /cmd param.

The executable understands the following set of commands:

After injection and execution of the DllMain function, the dll.dll library loads msxfs.dll and replaces the WFSGetInfo function with a special wrap function, named mWFSGetInfo.

At the time of the first call to the fake WFSGetInfo function, C:\ATM\c.ini is ignored and the library tries to find the ATM’s CASH_UNIT service id and stores the result, basically in the same way as the scan command does. If the CASH_UNIT service is not found, dll.dll won’t function. However, if successful, all further calls go to the mWFSGetInfo function, which performs the additional logic (reading, parsing and executing the commands from the C:\ATM\c.ini file).

Below is an output of the strings program uncovering some interesting log messages and the function names to be imported. The proprietary MSXFS.DLL library and its functions used in the ATMii malware are marked with red boxes. 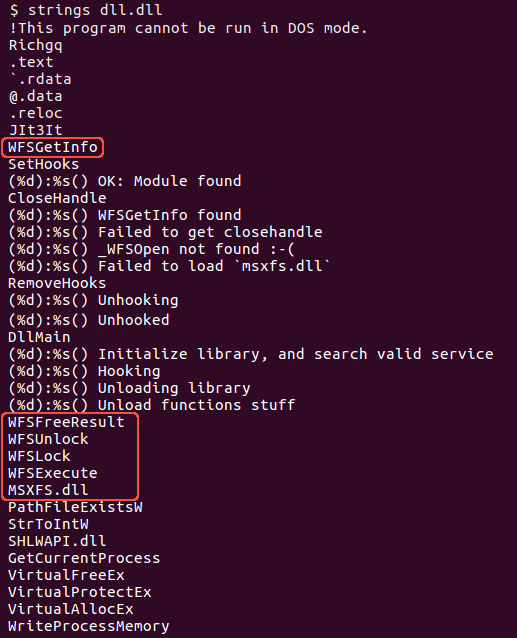 Because of the architecture of XFS, which is divided into services, the injected library first needs to find the dispense service. This command must be successfully called, because the disp and info commands depend on the service id retrieved by scan. Scan is automatically called after the dll has been injected into atmapp.exe.

After collecting the WFS_INF_CDM_STATUS data, additional data gets added to the tlogs.log. An example can be found below:

Before the criminals can dispense cash, they first need to know the exact contents of the different cassettes. For this, they use the info command which provides exhaustive information on all cassettes and their contents. The list of used XFS API functions is the same as with the scan command, but this time WFSGetInfo is called with the WFS_INF_CDM_CASH_UNIT_INFO (303) constant passed as a param.

Below is an example of the data in log file returned by the info command.

The dispense command is followed by two additional params in the command file: currency and amount. Currency must contain one of the three-letter currency codes of notes kept in the CASH_UNIT_INFO structure (currency codes are described in ISO_4217 e.g. RUB, EUR). The amount code holds the amount of cash to dispense and this value must be a multiple of ten.

Does nothing except deleting C:\ATM\c.ini command file.

ATMii is yet another example of how criminals can use legitimate proprietary libraries and a small piece of code to dispense money from an ATM. Some appropriate countermeasures against such attacks are default-deny policies and device control. The first measure prevents criminals from running their own code on the ATM’s internal PC, while the second measure will prevent them from connecting new devices, such as USB sticks.