In April 2021, we observed a suspicious Word document with a Korean file name and decoy. It revealed a novel infection scheme and an unfamiliar payload. While we were doing our research into these findings, Malwarebytes published a nice report with technical details about the same series of attacks, which they attributed to the Lazarus group. After a deep analysis, we came to a more precise conclusion: the Andariel group was behind these attacks. Andariel was designated by the Korean Financial Security Institute as a sub-group of Lazarus.

Our attribution is based on the code overlaps between the second stage payload in this campaign and previous malware from the Andariel group. Apart from the code similarity, we found an additional connection with the Andariel group. Each threat actor has characteristics when they interactively work with a backdoor shell in the post-exploitation phase. The way Windows commands and their options were used in this campaign is almost identical to previous Andariel activity.

The threat actor has been spreading the third stage payload from the middle of 2020 onwards and leveraged malicious Word documents and files mimicking PDF documents as infection vectors. Notably, in addition to the final backdoor, we discovered one victim getting infected with custom ransomware. It adds another facet to this Andariel campaign, which also sought financial profit in a previous operation involving the compromise of ATMs.

This research started off with us discovering a suspicious Word document on VirusTotal. It contains an unfamiliar macro and uses novel techniques to implant the next payload. We discovered two infection methods used in these attacks in our telemetry, where each payload has its own loader for execution in memory. The threat actor only delivered the final stage payload for selected victims.

As pointed out in Malwarebytes’s public report, the actor sent weaponized documents to the victim as an initial infection vector. The documents use sophisticated infection methods to try to impede detection.

The executed image003.zip is an HTML Application (HTA) file containing the second stage payload. This HTA code creates the next payload at the hardcoded path C:/Users/Public/Downloads/Winvoke.exe.

Besides the Microsoft Word document, the actor used an additional, alternative infection method according to our telemetry. Although we weren’t able to acquire the initial file, we assume the actor delivered a file disguised as a PDF, since we discovered artefacts containing the path of the tool ezPDFReader: c:\program files (x86)\unidocs\ezpdfreader2.0g\ezpdfwslauncher.exe. This software is developed by a South Korean software company named Unidocs. At this point, we’re missing clear evidence of whether the attack leveraged a vulnerability within this software in the infection process or it was used to deceive users by opening a PDF document as a decoy while the HTA payload is fetched from a remote resource.

Notably, the compromised website www.allamwith[.]com was used for a long period of time. We first saw the URL appearing in the context of this threat actor in September 2020 and it was still in use when we were researching this series of attacks at the end of April 2021.

When we analyzed the above malicious URLs, many of the resources had already gone offline, but the attacker is still using one distribution URL: hxxp://www.allamwith[.]com/home/css/skin.html

The URL hosts still serving the HTML Application (HTA) file exhibit similar functions as the HTA file created by the malicious Word document. However, in the case of remotely fetched HTA code with PDF-style attacks, the next payload gets dropped to a different hardcoded path, located at C:/users/public/iexplore.exe, and eventually executed.

The second stage payload is responsible for communicating with the C2 server and preparing another payload for the next stage. This second stage malware decrypts the embedded payload at runtime. It uses an embedded 16-byte XOR key to decrypt the base64 encoded payload. The decrypted payload is another portable executable file that runs in memory.

The infection procedure of the second stage payload:

According to the response from the C2 server, the payload is able to perform five actions:

Once launched, it checks for the mutex QD33qhhXKK and inspects the system for signs of a sandbox environment by searching for the presence of specific modules. The strings of module names to be checked are decoded with a hardcoded XOR key: 0x4B762A554559586F6A45656545654130

With the environment checks done, the main payload gets decrypted using the same XOR key and launched with rundll32.exe. Three C2 addresses then get extracted and decrypted using DES, with all addresses pointing to the same IP (23.229.111[.]197) in this sample. The malware then sends a hardcoded string to the C2 server:  “HTTP 1.1 /member.php SSL3.4”.

Next, it checks if the C2’s response data equals “HTTP 1.1 200 OK SSL2.1” and, if positive, starts conducting its backdoor operations. The samples contain debug data and thereby expose function names disclosing their purpose:

Interestingly, one victim was discovered to have received ransomware after the third stage payload. This ransomware sample is custom made and specifically developed by the threat actor behind this attack. This ransomware is controlled by command line parameters and can either retrieve an encryption key from the C2 or, alternatively, as an argument at launch time.

We saw the malware executed with the following parameter options in our telemetry, with some parameters illustrated below:

Upon launch, the ransomware checks the number of parameters. If the number of arguments is less than six, the malware terminates itself. If there is no extension for the encrypted files specified, the malware uses a default extension (.3nc004) and a default file name for the ransom note (3nc004.txt). If the victim ID is left unspecified, the ransomware generates a random ID 24 characters long.

If the malware is executed with the -s(-S) option, it sends the victim ID to the C2 server and receives the initial vector (IV) and key to encrypt files. Each of the strings has a length of 32 characters. When the ransomware communicates with the C2 server, it uses the same authentication process and strings as the third stage payload.

The ransomware uses an AES-128 CBC mode algorithm to encrypt files on the victim machine. With the exception of system-critical files (“.exe”, “.dll”, “.sys”, .”msiins”, and “.drv” extensions), the malware encrypts files completely, irrespective of file size. However, since important system configuration files are affected by the encryption procedure as well, it can lead to an unstable system.

As a final step, it leaves a ransom note on the desktop and in the startup folder and opens it with notepad.exe.

Historically, the Andariel group has mainly targeted entities in South Korea, which, according to our telemetry, is also the case in this campaign. We confirmed several victims in the manufacturing, home network service, media and construction sectors. Each victim is active in their respective industries and they do not appear to be connected. Therefore, it is not currently possible to determine a precise focus with regard to victimology.

In one instance we discovered that the threat actor delivered ransomware to a victim. This adds a financially motivated angle to these attacks. The Andariel group has already been observed directly monetizing an operation in a previous case where ATMs were compromised in South Korea. 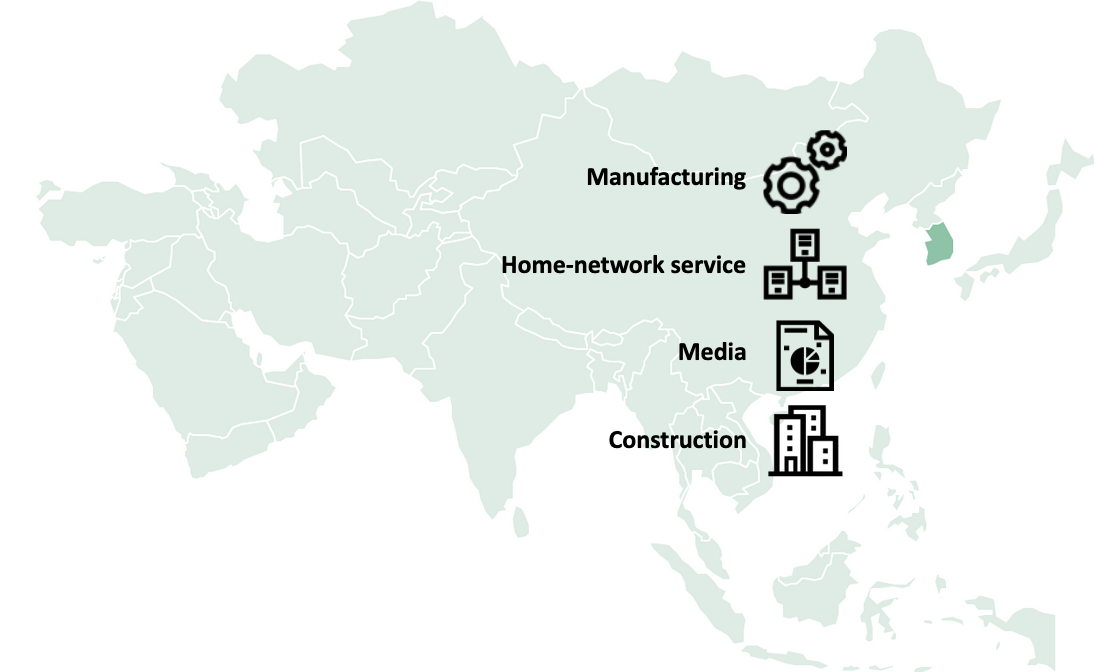 An additional indicator pointing to the Andariel group can be discovered in the post-exploitation commands on victim machines. As a rule, each APT actor displays a different command line signature when working interactively via an installed backdoor. As a result of comparing previously seen Windows commands delivered by the Andariel group, we can confirm that both cases used the same Windows command options.

The Lazarus group has been observed using Windows commands that differ from Andariel, such as preferring the “-ano” option with the “netstat” command and “find”  as a filter command, rather than “findstr”.

However, apart from the connections to the Andariel group, we discovered two weaker ties to the Lazarus group in the third stage payload. It shows an overlap with the PEBBLEDASH malware family, previously published by CISA. CISA attributed this malware variant to a threat actor they dubbed Hidden Cobra. We called this malware variant Manuscrypt and attributed it to the Lazarus group.

In conclusion, we assess that the Andariel group is behind this attack. However, it also reveals a faint connection to the Lazarus group.

The Andariel group has continued to focus on targets in South Korea, but their tools and techniques have evolved considerably. By closely examining the whole infection procedure, we discovered that the Andariel group intended to spread ransomware through this attack and, by doing so, they have underlined their place as a financially motivated state-sponsored actor.