This report contains the results of the Managed Detection and Response (MDR) service (brand name – Kaspersky Managed Protection). The MDR service provides managed threat hunting and initial incident response. Threat hunting is the practice of iteratively searching through data collected from sensors (referenced as telemetry or events) in order to detect threats that successfully evade automatic security solutions. A brief description of the service is provided at the end of this document.

The MDR service processes security operations events, focusing on and improving activity performed by professionals in charge of threat hunting projects, their level of expertise and the threat intelligence enabled through the detection process. According to David Bianco’s Pyramid of Pain, TTP-based threat detection is the most difficult type of indicators of attacks (IoAs) to circumvent for an adversary. The Kaspersky team is focused on TTP-based threat hunting in its MDR service, where humans are heavily involved to ensure the best judgments are made on collected events, especially advanced threats. This significantly augments automatic detection logic provided by endpoint protection products (EPP) used as sensors during the service delivery.

Geography and industry verticals of the MDR service delivered by Kaspersky 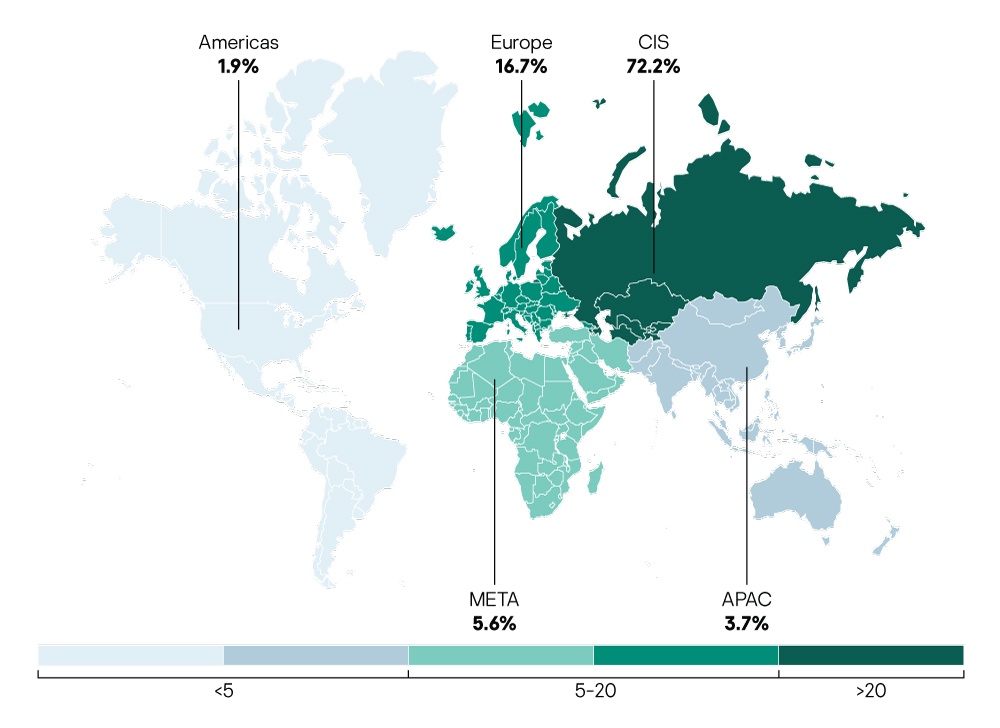 Almost all alerts were generated by the analysis of events from endpoint sensors based on IoAs (TTP-based threat detection logic) and less than 2% of them were identified as cybersecurity incidents.

The low IoA conversion rate reflects the need to detect advanced threats which use a ‘living off the land’ approach, with behaviors that are very similar to legitimate activity. The more a malicious behavior mimics the normal behavior of users and administrators, the higher the rate of false positives and, consequently, the lower the conversion rate from alerts.

(or incident processing time) is the time from an automatic alert generation as a result of automated analysis of events to its resolution by Kaspersky experts.

It is worth noting that incident investigation may include additional work on the customer side or extra expert analysis and it may require more time for resolution – on average, up to 37 minutes in cases of incidents associated with advanced threats or sophisticated attack detection.

The main ideas behind IoA-TTP-based detection:

MTTR in view of incident severity

The incident processing time can is slightly depend on severity: incidents with a higher degree of severity require more complex and complicated analysis. They require more advanced remediation measures to cure infected systems and to protect against reoccurrence or threat propagation inside the network infrastructure than incidents with medium and low severity levels.

The MTTR values for incidents of different severity are provided below.

Incident severity is evaluated by experts based on a combination of factors, such as threat actor, attack stage at the time of incident detection (e.g. cyber kill chain), the scale of affected infrastructure, details about the threat and how it may be relevant to a customer’s business and, with the customer’s feedback, the identified impact on infrastructure, complexity of remediation measures and more. The severity levels are described below.

In the first half of 2019, we identified the following severity levels by month.

Almost all incidents that have medium or low severity are connected to threats that can be efficiently remediated by endpoint protection products (EPP). No action from the side of the victim systems is required except for anti-malware database updates to EPPs to eliminate the risks associated with such incidents. This shows that an EPP is an effective threat response tool in the case of low and medium severity incidents, but it requires an additional level of TTP-based threat hunting, manual detection, and analysis to find new, unknown, or advanced threats.

Statistics on attack tactics used in incidents of different severity (high, medium, low) at the time of detection

The tactics are placed in Cyber Kill Chain order. 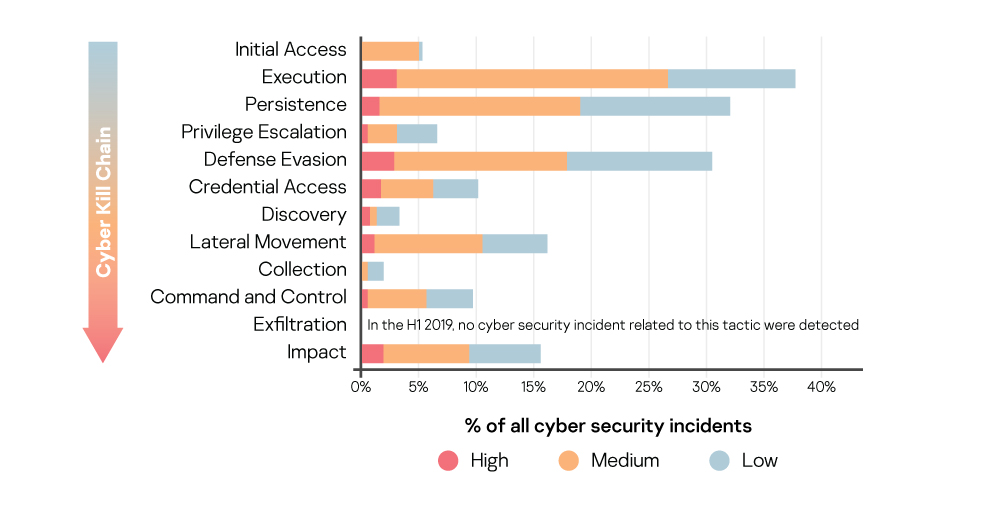 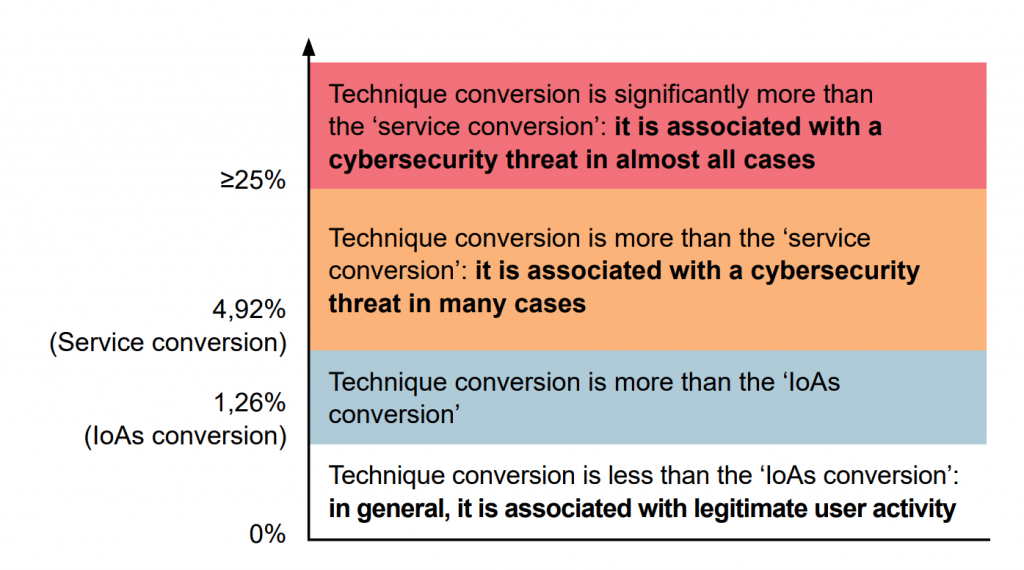 A large number of alerts associated with an attack technique generally result from its legitimate use in the analyzed infrastructure. This must be controlled properly, because it indicates potentially favorable conditions for conducting corresponding attacks.

It is highly important to determine whether behavior is normal for a particular IT infrastructure. 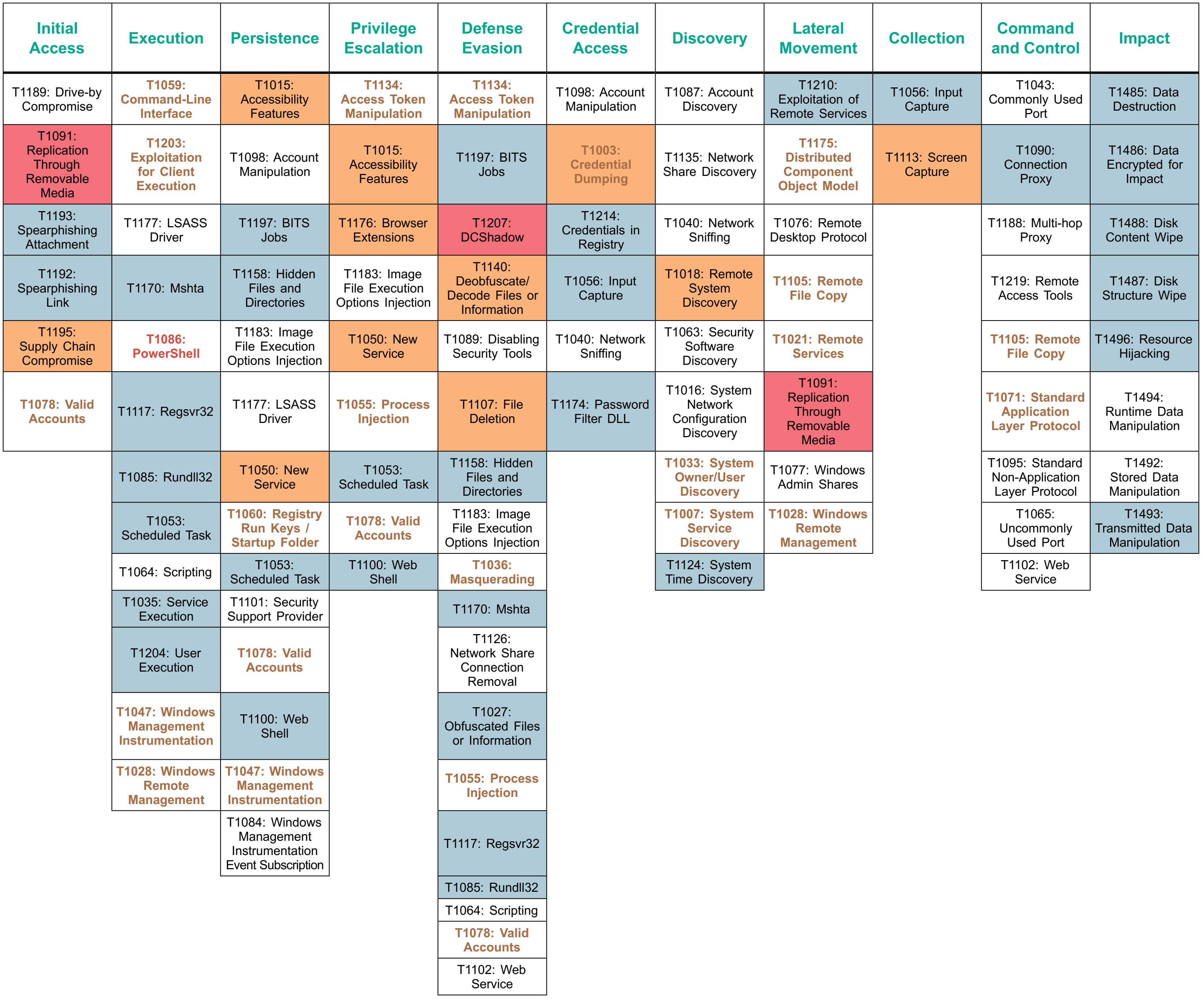 Detailed information on attack technique statistics, including telemetry required for detection of the corresponding cybersecurity incidents, is provided by link.

Real-time monitoring of network traffic combined with object sandboxing and endpoint behavior analysis delivers a detailed insight into what is happening across a business’s IT infrastructure. According to the global threat landscape and the use of TTP-based threat detection logic (using IoAs), correlation of events from multiple layers of IT infrastructure, including networks and endpoints, enables “near real-time” detection of complex threats as well as retrospective investigations.