While analysing an incident which involved a suspected keylogger, we identified a malicious library able to interact with a virtual file system, which is usually the sign of an advanced APT actor. This turned out to be a malicious loader internally named ‘Slingshot’, part of a new, and highly sophisticated attack platform that rivals Project Sauron and Regin in complexity.

The initial loader replaces the victim´s legitimate Windows library ‘scesrv.dll’ with a malicious one of exactly the same size. Not only that, it interacts with several other modules including a ring-0 loader, kernel-mode network sniffer, own base-independent packer, and virtual filesystem, among others.

While for most victims the infection vector for Slingshot remains unknown, we were able to find several cases where the attackers got access to Mikrotik routers and placed a component downloaded by Winbox Loader, a management suite for Mikrotik routers. In turn, this infected the administrator of the router.

We believe this cluster of activity started in at least 2012 and was still active at the time of this analysis (February 2018).

Why did you call the intruder Slingshot?

The name appears unencrypted in some of the malicious samples – it is the name of one of the threat actor’s components, so we decided to extend it to the APT as a whole.

When was Slingshot active?

The earliest sample we found was compiled in 2012 and the threat was still active in February 2018.

How did the threat attack and infect its victims?

Slingshot is very complex and the developers behind it have clearly spent a great deal of time and money on its creation. Its infection vector is remarkable – and, to the best of our knowledge, unique.

We believe that most of the victims we observed appeared to have been initially infected through a Windows exploit or compromised Mikrotik routers. 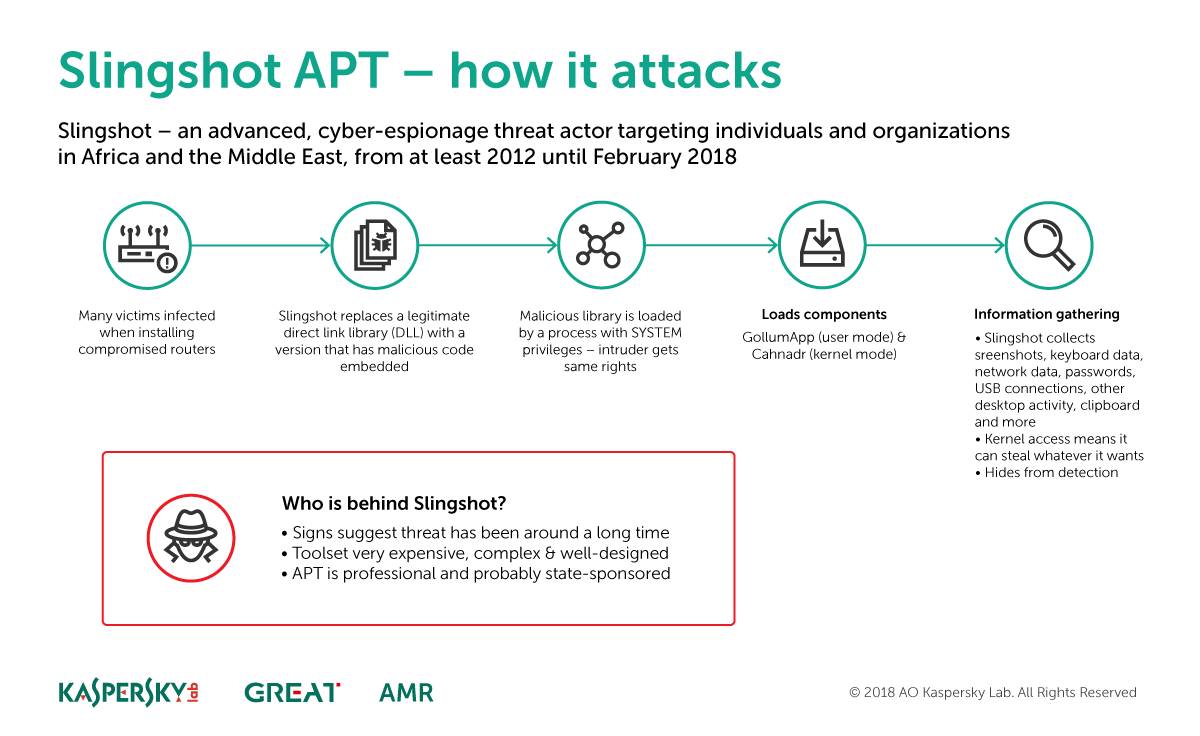 How exactly does infection happen?

The exact method used by Slingshot to exploit the routers in the first instance is not yet clear. When the target user runs Winbox Loader software (a utility used for Mikrotik router configuration), this connects to the router and downloads some DLLs (dynamic link libraries) from the router’s file system.

One of them – ipv4.dll – has been placed by the APT with what is, in fact, a downloader for other malicious components. Winbox Loader downloads this ipv4.dll library to the target’s computer, loads it in memory and runs it.

This DLL then connects to a hardcoded IP and port (in every cases we saw it was the router’s IP address), downloads the other malicious components and runs them.

To run its code in kernel mode in the most recent versions of operating systems, that have Driver Signature Enforcement, Slingshot loads signed vulnerable drivers and runs its own code through their vulnerabilities. .

Following infection, Slingshot would load a number of modules onto the victim device, including two huge and powerful ones: Cahnadr, the kernel mode module, and GollumApp, a user mode module. The two modules are connected and able to support each other in information gathering, persistence and data exfiltration.

The most sophisticated module is GollumApp. This contains nearly 1,500 user-code functions and provides most of the above described routines for persistence, file system control and C&C communications.

Canhadr, also known as NDriver, contains low-level routines for network, IO operations and so on. Its kernel-mode program is able to execute malicious code without crashing the whole file system or causing Blue Screen – a remarkable achievement. Written in pure C language, Canhadr/Ndriver provides full access to the hard drive and operating memory despite device security restrictions, and carries out integrity control of various system components to avoid debugging and security detection.

Are Mikrotik the only affected routers?

Some victims may have been infected through other routes. During our research we also found a component called KPWS that turned out to be another downloader for Slingshot components.

Did you inform the affected vendor?

Although the available intelligence is limited and we are not sure what kind of exploit was used to infect routers, we provided Mikrotik with all information available.

What can users of Mikrotik routers do to protect themselves?

Users of Mikrotik routers should upgrade to the latest software version as soon as possible to ensure protection against known vulnerabilities. Further, Mikrotik Winbox no longer downloads anything from the router to the user’s computer.

What are the advantages of achieving kernel mode?

It gives intruders complete control over the victim computer. In kernel mode malware can do everything. There are no restrictions, no limitations, and no protection for the user (or none that the malware can’t easily bypass). 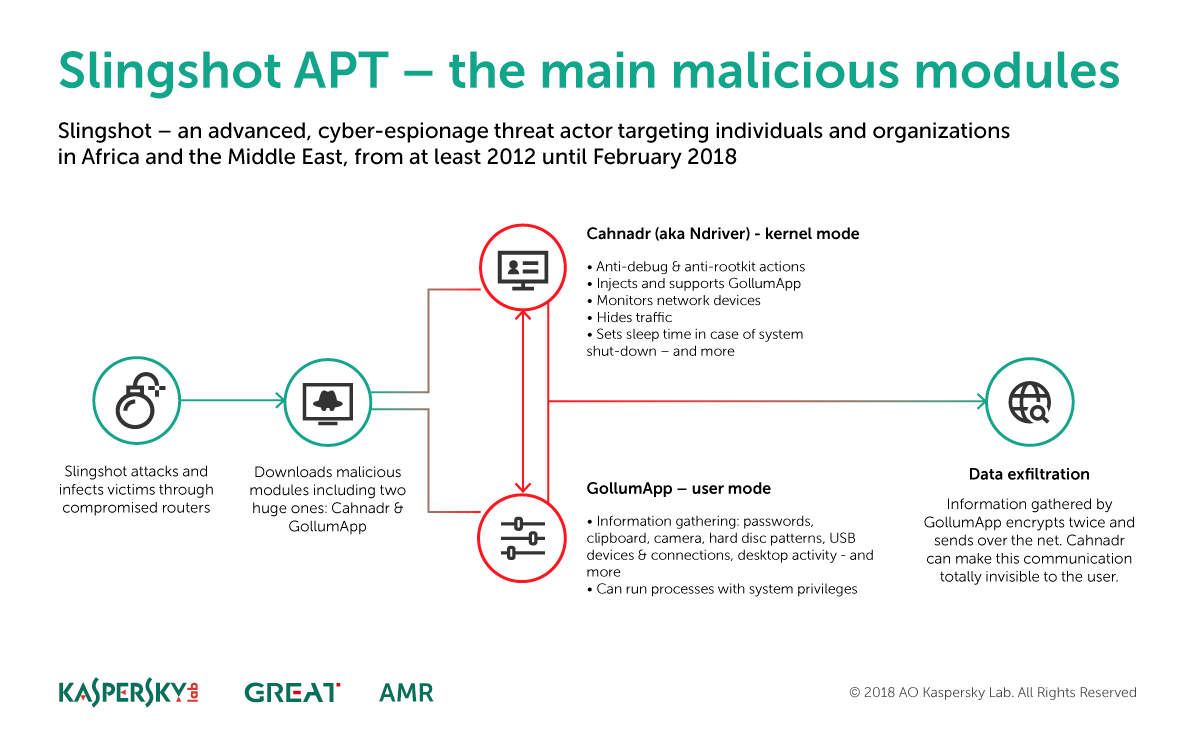 What kind of information does Slingshot appear to be looking for?

Slingshot’s main purpose seems to be cyber-espionage. Analysis suggests it collects screenshots, keyboard data, network data, passwords, USB connections, other desktop activity, clipboard and more. But with full access to the kernel part of the system, it can steal whatever it wants – credit card numbers, password hashes, social security account numbers – any type of data.

How did Slingshot avoid detection?

The threat actor combined a number of known approaches to protect it very effectively from detection: including encrypting all strings in its modules, calling system services directly in order to bypass security-product hooks, using a number of Anti-bug techniques, and more.

Further, it can shut down its components, but ensure they complete their tasks before closing. This process is triggered when there are signs of an imminent in-system event, such as a system shutdown, and is probably implemented to allow user-mode components of the malware to complete their tasks properly to avoid detection during any forensic research.

You said that it disables disk defragmentation module in Windows OS. Why?

This APT uses its own encrypted file system and this can be located among others in an unused part of a hard drive. During defragmentation, the defrag tool relocates data on disk and this tool can write something to sectors where Slingshot keeps its file systems (because the operating system thinks these sectors are free). This will damage the encrypted file system. We suspect that Slingshot tries to disable defragmentation of these specific areas of the hard drive in order to prevent this from happening.

How does it exfiltrate data?

The malware exfiltrates data through standard networks channels, hiding the traffic being extracted by hooking legitimate call-backs, checking for Slingshot data packages and showing the user (and users’ programs like sniffers and so on) clear traffic without exfiltrated data.

Does it use exploits to zero-day vulnerabilities? Any other exploits?

We haven’t seen Slingshot exploit any zero-days, but that doesn’t mean that it doesn’t – that part of a story is still unclear for us. But it does exploit known vulnerabilities in drivers to pass executable code into kernel mode. These vulnerabilities include CVE-2007-5633; CVE-2010-1592, CVE-2009-0824.

What is the victim profile and target geography?

So far, researchers have seen around 100 victims of Slingshot and its related modules, located in Kenya, Yemen, Afghanistan, Libya, Congo, Jordan, Turkey, Iraq, Sudan, Somalia and Tanzania. Most of the victims appear to be targeted individuals rather than organizations, but there are some government organizations and institutions. Kenya and the Yemen account for most of the victims observed to date. 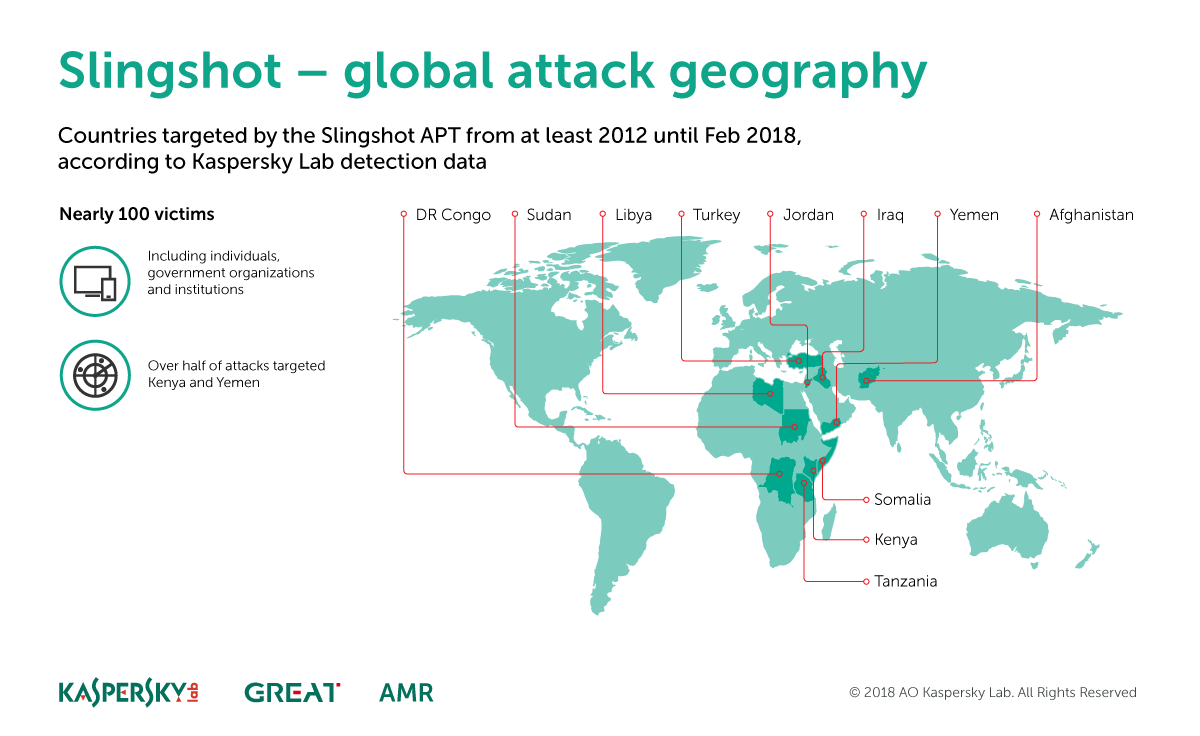 What do we know about the group behind Slingshot?

The malicious samples investigated by the researchers were marked as ‘version 6.x’, which suggests the threat has existed for a considerable length of time. The development time, skill and cost involved in creating Slingshot’s complex toolset is likely to have been extremely high. Taken together, these clues suggest that the group behind Slingshot is likely to be highly organized and professional and probably state-sponsored.

Text clues in the code suggest it is English-speaking. Some of the techniques used by Slingshot, such as the exploitation of legitimate, yet vulnerable drivers has been seen before in other malware, such as White and Grey Lambert. However, accurate attribution is always hard, if not impossible to determine, and increasingly prone to manipulation and error.

Read more in our technical paper. 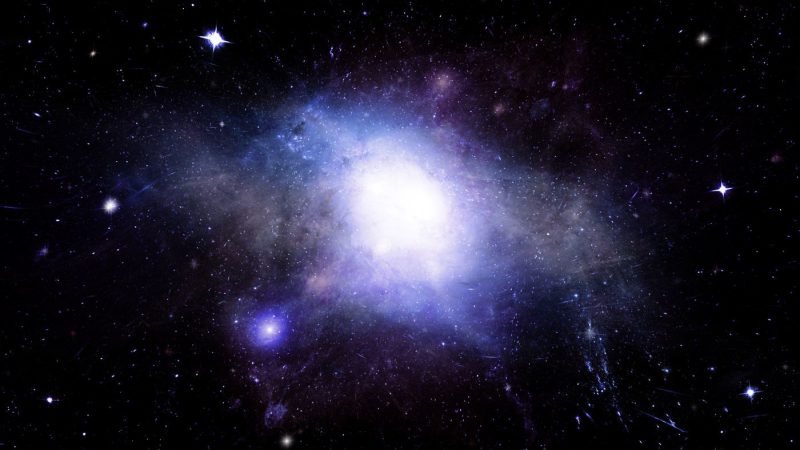 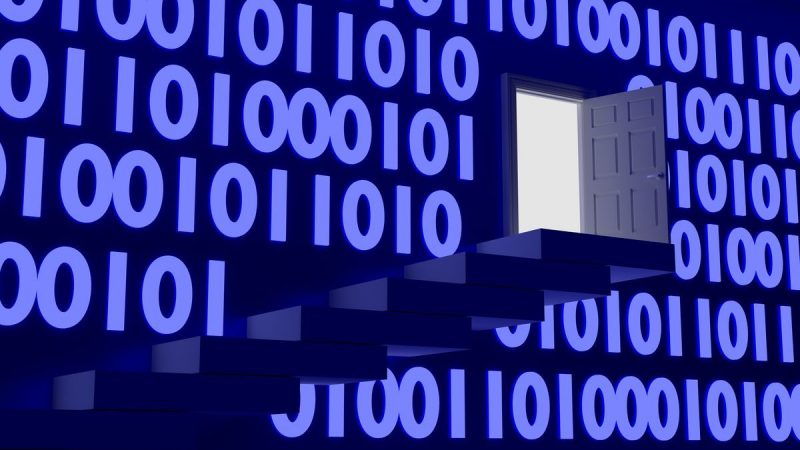 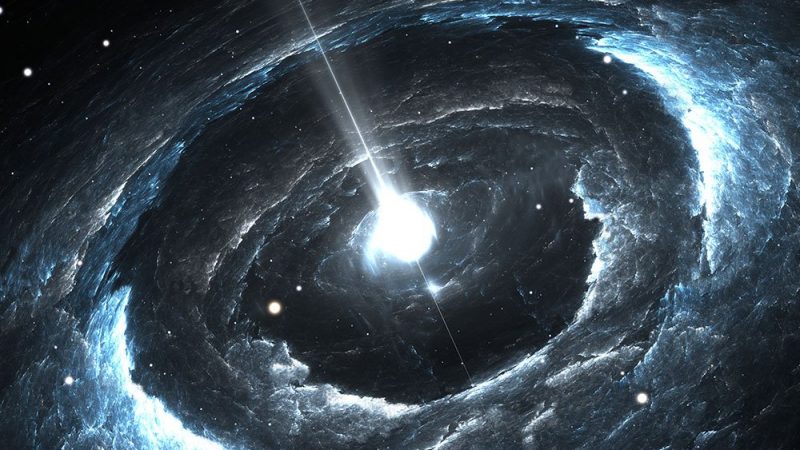