In 2014, researchers at Kaspersky Lab discovered and reported on three zero-days that were being used in cyberattacks in the wild.

Two of these zero-day vulnerabilities are associated with an advanced threat actor we call Animal Farm. Over the past few years, Animal Farm has targeted a wide range of global organizations. Victims include:

Our colleagues at Cyphort (http://www.cyphort.com/babar-suspected-nation-state-spyware-spotlight/), G-DATA and ESET have recently published blogs about Bunny, Casper and Babar, some of the Trojans used by the Animal Farm group.

The Farm includes several Trojans, which we have grouped into six major families: 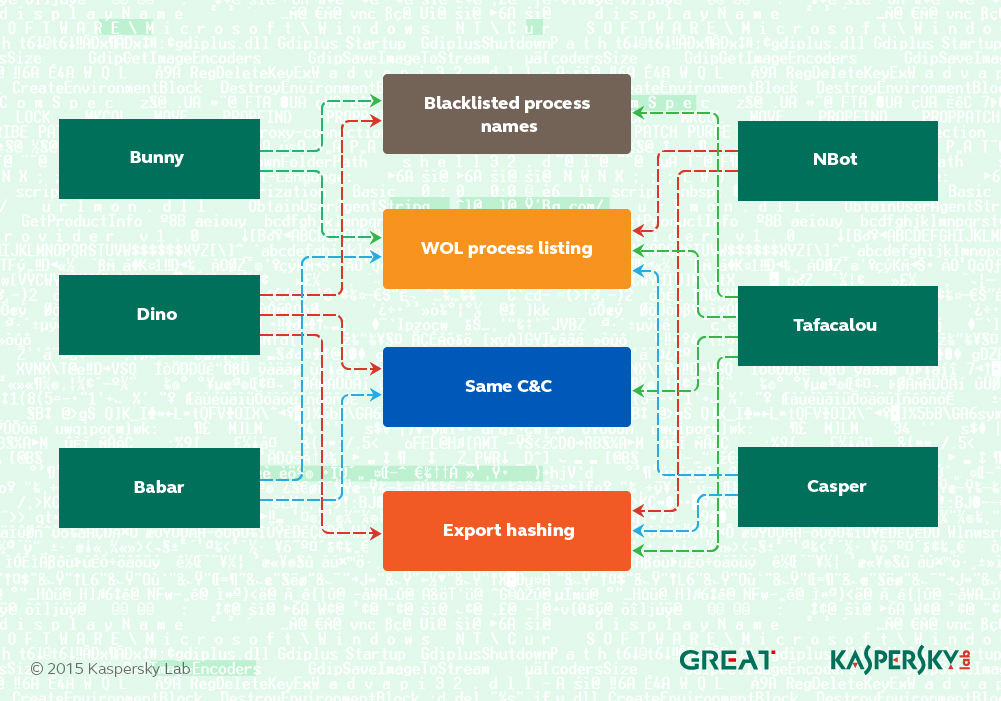 Here’s a brief description of the animals in the farm:

The group has been active since at least 2009 and there are signs that earlier malware versions  were developed as far back as 2007.

Over the years we have tracked multiple campaigns by the Animal Farm group. These can be identified by a specific code found either in the malware configuration or extracted from the C&C logs. 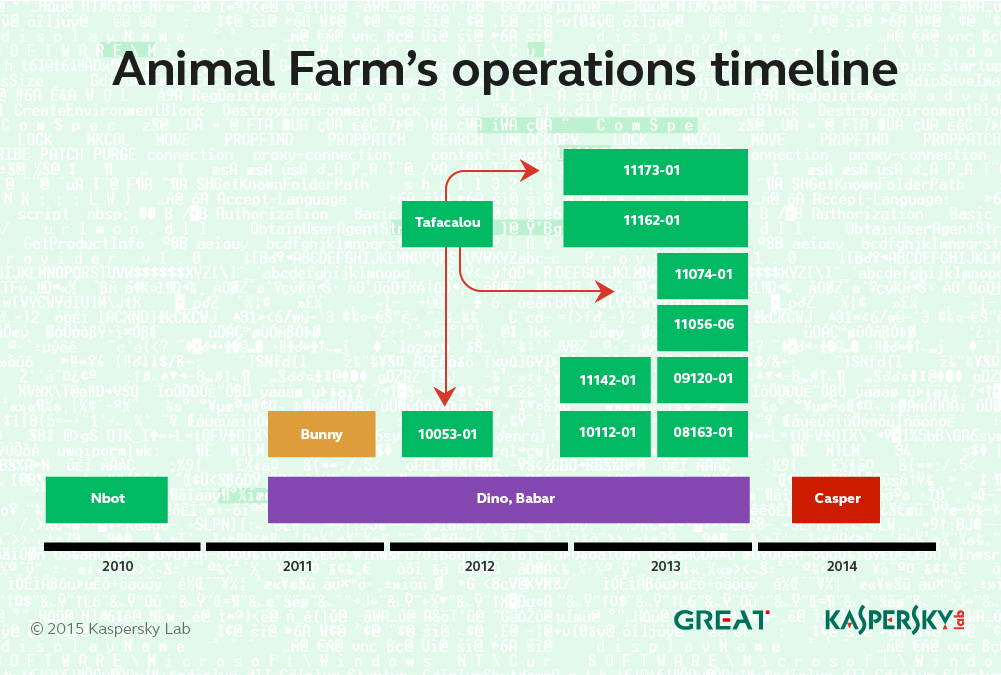 Most recently, the group deployed the Casper Trojan via a watering-hole attack in Syria. A full description of this zero-day attack can be found in this blog post by Kaspersky Lab’s Vyacheslav Zakorzhevsky.

In addition to these, the Animal Farm attackers used at least one unknown, mysterious malware during an operation targeting computer users in Burkina Faso.

During the investigation we sinkholed a large number of C&C servers used by the Animal Farm group. This allowed us to compile a comprehensive picture of both targets and victims.

The malware known as Tafacalou (aka “TFC”, “Transporter”) is perhaps of greatest interest here, because it acts as an entry point for the more sophisticated spy platforms Babar and Dino. Based on the Tafacalou infection logs, we observed that most of the victims are in the following countries: Syria, Iran, Malaysia, USA, China, Turkey, Netherlands, Germany, Great Britain, Russia, Sweden, Austria, Algeria, Israel, Iraq, Morocco, New Zealand, Ukraine. 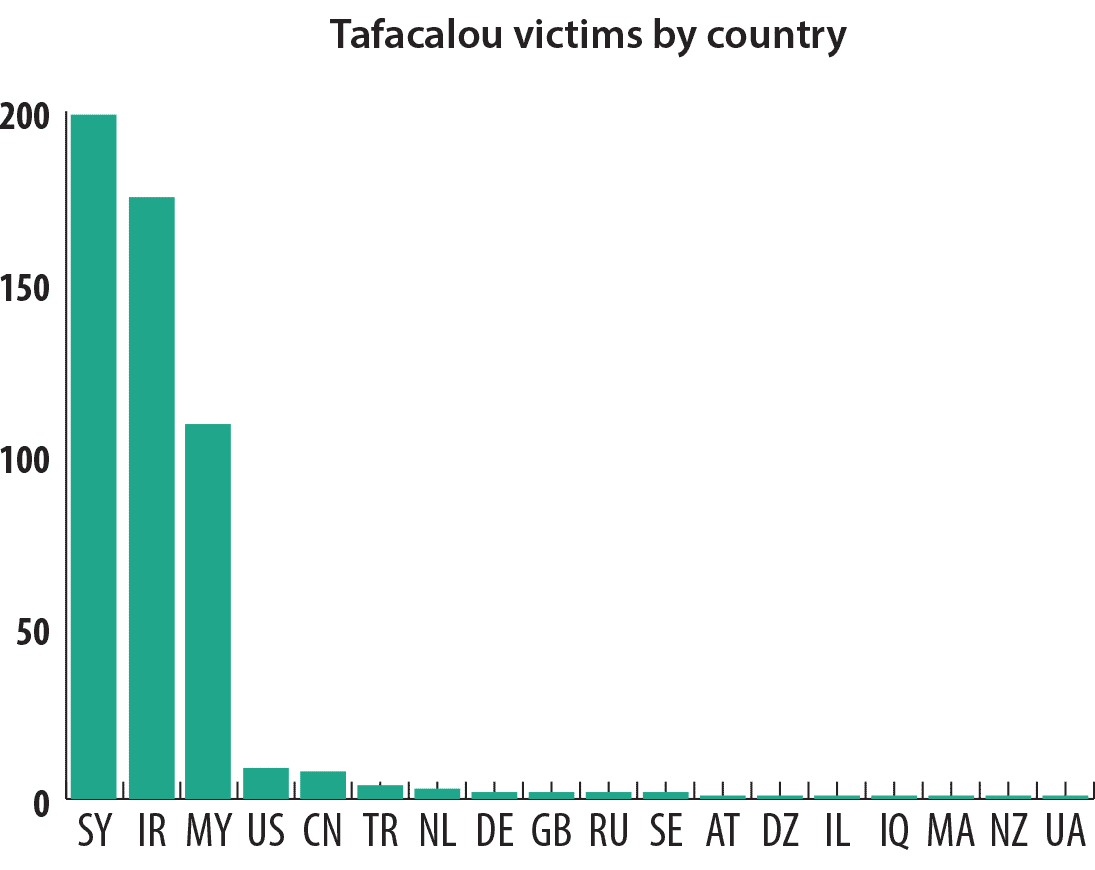 “Tafacalou” is the attacker’s internal name for one of the validator (1st stage) Trojans. We tried various spellings of this word to see if it means anything in a specific language, and the most interesting option is one with its origins in the Occitan language: “Ta Fa Calou.”

The expression “Fa Calou” is the French interpretation of the Occitane “Fa Calor” which means “it’s getting hot” (see http://ejournaux.blogspot.com/2008/07/la-langue-occitane-et-ses-quelques.html). ‘Ta Fa Calou” could therefore be taken to mean “so it’s getting hot” based on the Occitan language.

According to Wikipedia: ‘Occitan is a Romance language spoken in southern France, Italy’s Occitan Valleys, Monaco, and Spain’s Val d’Aran; collectively, these regions are sometimes referred to unofficially as “Occitania”.

Animals in the APT Farm